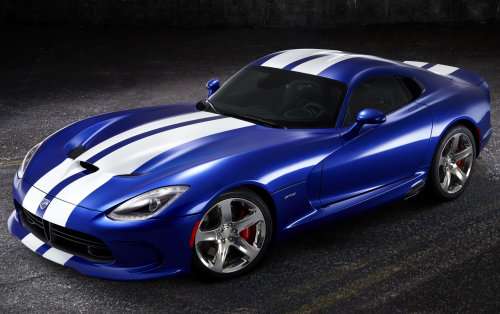 The recent pricing announcement for the 2013 SRT Viper and SRT Viper GTS including all of the options revealed a great deal about the new Mopar supercar but skimmed over by many was the fact that the limited production Launch Edition version of the 2013 SRT Viper GTS will cost buyers somewhere in the range of $150,000.
Advertisement

The 2013 SRT Viper is available in standard trim and in the high performance and high luxury Viper GTS trimline with the standard model starting at $97,395 while the Viper GTS carries a starting price of $120,395. The SRT Group announced recently that there would be a limited number of special “Launch Edition” Vipers built featuring a unique GTS Blue paint scheme with thick twin white stripes but the most recent pricing announcement included full details for the rare, special Launch Edition SRT Viper GTS with the base price running right around $150,000 when the buyer finally gets out of the dealership.

The 2013 SRT Viper GTS Launch Edition package carries an MSRP of $15,500 on top of the base price of the Viper GTS of $120,395. This price does not include the $1,995 destination fee nor does it include gas guzzler tax, sales tax or title/licensing fees. Considering that the gas guzzler tax for the 470 horsepower 2013 Chrysler 300C SRT8 is $1,000 and it is also $1,000 for the 638 horsepower Chevrolet Corvette ZR1 – we can expect that the Viper GTS fuel economy penalty tax will be right around $1,000. When you add up the base price of the Viper GTS, the cost of the Launch Edition package, the destination fee and the gas guzzler tax, the cost jumps to $138,890. If we use a figure of 6.5% for the sales tax and a titling fee of $75, the “base” total price of the 2013 SRT Viper GTS Launch Edition sits around $148,000 and if you live in an area with a higher sales tax – you can expect to pay almost $150,000 for your special edition Viper GTS. I should also point out that this price does not include any sort of dealership markup and for the first batch of SRT Vipers, I would be stunned if every single one didn’t bear the load of a massive dealership “demand adjustment” in the price…and it’s impossible to say just how high that markup will be until cars hit showrooms.

In addition to the GTS Blue paint and painted white stripes, the 2013 SRT Viper GTS Launch Edition is equipped with the optional Laguna Interior leather package, an 18-speaker Harman Kardon premium audio system, polished forged aluminum five-spoke Rattler wheels that are unique to the Launch Edition, a blue and white Mopar car cover with the sequential number of the car, unique Stryker Viper logos with a blue background and a special dash plaque bearing the VIN number and announcing the special nature of that particular 2013 Viper GTS. The Grand Touring Package is also included as one of the standard features of the Viper GTS. Click here for a full look at the option pricing for the 2013 SRT Viper.

So is the $15,500 upcharge for the 2013 SRT Viper GTS Launch Edition package really worth it? When you look at the fact that the Launch Edition package includes the Laguna Interior leather package that carries a price of $7,500 for other GTS models, the GTS Blue paint that comes with a $1,000 upcharge on the basic GTS, the 18-speaker Harman Kardon stereo system that normally costs $1,000 extra, stripes that are $5,000 in other colors and the Rattler wheels that increase the price by $500 – the total value of the options that can be purchased separately on non-Launch Edition Viper GTS models comes to $15,000. I should also point out that you cannot “build your own” Launch Edition from the normal factory options as bright white stripes and the blue Stryker badges are not offered for other GTS models as well as the unique serialized dash plaque or the numbered Mopar car cover. So for just $500, those lucky buyers who get their hands on a 2013 SRT Viper GTS Launch Edition will essentially be paying just $500 extra for the few extra goodies not available through the basic Viper GTS option list along with the immeasurable exclusivity of owning one of the very first new Viper GTS coupes.

I would say that yes, it is worth the price for those buyers who are going to buy a 2013 SRT Viper GTS to jump on the chance to have one of the limited Launch Edition models. Only 150 of this package will be made.

Unfortunately, I have to end this piece by revisiting the fact that the early orders for the 2013 SRT Viper GTS could carry monumental dealer markups so I would not consider it to be out of the question for the first cars sold in dealers to creep up on the $200k mark – especially in the limited Launch Edition trim.