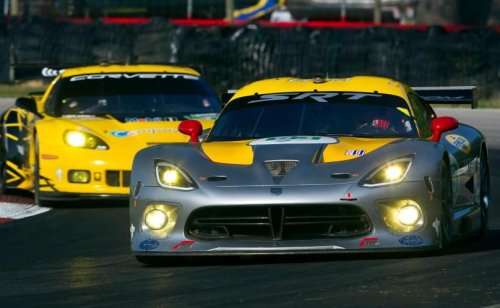 Saturday afternoon brought about the debut of the 2013 SRT Viper GTS-R race car in the American LeMans Series in Mid Ohio and while their 10th and 12th place finishes are a far cry from the win collected when the original GTS-R debut in the 90s – Team SRT is happy with the performance of their brand new race cars and they will make their next attempt in two weeks at Road America.
Advertisement

The weekend started off on the shaky side of things when Viper GTS-R #91 ran into engine problems during the first official practice session that forced the Forza Motorsport 4 car to start at the rear of the field. The #93 Pennzoil Ultra Viper GTS-S qualified in the 10th position ALMS race at the Mid Ohio Sports Car Challenge almost 3 seconds behind the top qualifying time for the GT Class turned in by the #55 BMW M3. Overall, the #93 Viper GTS-R started 24th while the #91 Viper started in the 32nd position. The 2013 Viper GTS-R teams surely would have liked to qualify better but it doesn’t matter where you qualify so long as you finish well.

Unfortunately, the 2013 SRT Viper GTS-R teams didn’t finish all that well either.

The #91 Forza Motorsport 4 Viper GTS-R ran 111 laps during the 2 hour and 46 minute race which placed the Viper driven by Kumo Wittmer and Dominic Farnbacher in the 10th position in the GT Class; 23rd overall. Keep in mind this was the Viper that started after the rear of the field after being forced to change an engine, missing qualifying so after starting 32nd overall and 13th in the class, the #91 Viper moved up through the field a bit in the new GTS-R debut. This placed the #91 Viper ahead of the sole Lotus Evora (11th) in the lineup as well as the #3 Chevrolet Corvette ZR1 (13th).

“After 10 years or so of being away and not competing, here we are in our first race back and we are in the top-10,” said Kumo Wittmer, driver of the #91 Viper. “We learned so much in this race about everything that keeps the package together. We’ll keep working at it and we’ll get better, but we are encouraged by the start.”

Things didn’t go quite as well for the #93 Pennzoil Ultra SRT Viper GTS-R driven by Marc Goossens and Tommy Kendal. After starting in the 10th position in the GT Class, the yellow and silver Viper was consistent all day but due to an accident late in the race that sent the #93 into the tire barrier – the Pennzoil Ultra team had to settle for a 12th place finish in the GT Class and 25th overall. The #93 Viper GTS-R did best the #3 Chevrolet Corvette ZR1 in its debut in the American LeMans Series.

While the Viper teams and Viper fans alike would have preferred to see the 2013 SRT Viper GTS-R place better in its 2012 season debut – the Viper teams looked at this first race as more of a test sessions rather than a real attack of the field. The driver’s of these two cars only had a few months of seat time in a car that was totally designed in less than a year – while the other cars are all at least in their second year of competition with drivers packing vastly more experience in those particular cars.

"It's been a very quick time period between putting this together and getting it out on track, but we had to get out here to see where we stood against such an amazing field of manufacturers," said Beth Paretta, Director of Marketing and Operations – SRT Brand and Motorsports. "We know that our Viper and SRT owners were very excited to see us out here in Ohio and we are looking forward to even more great days ahead."

The 2013 Vipers got progressively quicker as the race went on as the drivers began getting a better feel for the new cars in and out of the pack. Finishes of 23rd and 25th overall (10th and 12th in the class) arent what fans had hoped for but most importantly – the 2013 SRT Viper GTS-R showed that it could withstand the rigors of endurance racing. As the drivers get more experience in preparation for their full 2013 American LeMans Series, we can expect to see the #91 and #93 Vipers appearing higher in the final standings.

The Mid Ohio Sports Car Challenge GT Class was won by the #4 Chevrolet Corvette ZR1 driven by Oliver Gavin and Tommy Milner. The #4 car completed 115 laps while the P1 class car that was the overall winner completed 123 laps in 2 hours, 46 minutes and 4 seconds.

Speaking of more experience, Chrysler representatives have confirmed that both the #91 Forza Motorsport 4 Viper GTS-R and the #93 Pennzoil Ultra Viper GTS-R will be racing at the Road Race Showcase at Wisconsin’s Road America Raceway. Testing kicks off on Thursday August 16th at 3pm for the GT Class cars with two practice sessions on Friday before qualifying at 3:55pm. The 4 hour long race begins Saturday August 18th at 2:30pm. Television coverage begins that Saturday at 2:00pm on ESPN2 while racing fans with an Xbox 360 can watch on the ESPN3 app as well.

TorqueNews will continue covering the voyage of the new SRT Viper GTS-R as the two teams continuing tuning the car to keep up with the competition.