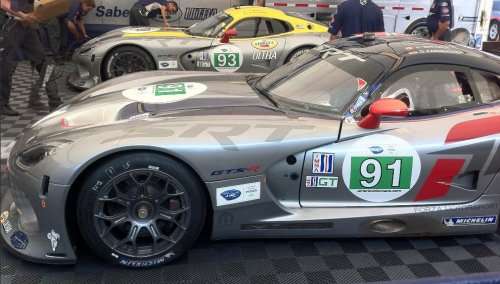 The two new 2013 SRT Viper GTS-R teams completed their first official practice with the American LeMans Series a couple hours ago with both teams turning in mediocre times – putting them both in the lower end of the GT Class field after very short practice sessions.
Advertisement

The first practice session for the 2013 SRT Viper GTS-R in the American LeMans Series (ALMS) took place on the Mid Ohio Sports Car Course today from 3:15 to 5:15 during which time the two Viper teams performed their first official practice – marking the actual return of the fabled Viper to the racing world. The #91 SRT Viper GTS-R sponsored by Forza Motorsport 4, driven by Kumo Wittmer and Dominik Farnbacher, turned in a best lap time of 1:22.891 with a speed of 98.066 miles per hour; good for 11th in the 13 car field. The #93 SRT Viper GTS-R sponsored by Pennzoil Ultra, driven by Marc Goossens and Tommy Kendal, turned in a best time of 1:23.759 and a speed of 97.050 miles per hour, making them the slowest car in the class. The Silver/Blue #91 Viper team reported their best lap on the 13th lap out of the 28 that it ran while the Silver/Yellow #93 Viper reached their best on lap 11 of 16. Those times put the two Viper teams right in the middle of the GT Class practice times but it should be noted that both Vipers ran far fewer laps than the other cars in the class.

The fastest GT Class entry was the Ferrari F458 Italia driven by Scott Sharp and Johannes van Overbeek with a lap of 1:20.486 and a speed of 100.996. The next eight fastest cars in the GT Class were within a second of the Ferrari’s top time while the #91 Viper was 2.405 seconds back and the #93 Viper’s best was 3.273 seconds back. However, both of the best lap times turned in by the 2013 Viper GTS-R teams were ahead of those times turned in by the slower GTS class so the Vipers are in the general ballpark.

Today marked the first time that the two new 2013 SRT Viper GTS-R teams hit the track so these rough times can be chalked up to being due to growing pains. The SRT Twitter account referred to these passes as “shakedown” runs and I would expect that when first practice kicks off early tomorrow – we will be seeing far quicker times from the new Vipers. The ALMS Twitter handle reported around 4:30pm that the #93 Viper had been pushed down pit lane – leading us to believe that there were some mechanical issues with the Pennzoil Ultra Viper that led to the short practice session.

Practice session #1 runs tomorrow from 8:45 to 9:45 followed by practice sessions #2 running from 11:15 to 12:15 – both of which lead up to the qualifying round from 12:25 to 1:35. Those first two practice sessions tomorrow morning should give Viper fans a good idea as to what to expect in terms of qualifying times – all of which should offer an idea of how competitive the 2013 Viper GTS-R will be in its first race of the 2012 American LeMans Series. Those ALMS fans who have access to the Xbox Live ESPN3 app can watch qualifying live, starting at 12:15pm on Friday.

The actual Mid Ohio Sports Car Challenge race begins on Saturday at 1:05pm with a run time of 2 hours and 45 minutes around the 2.258 mile road course. The race will air on ABC starting at 2:00pm EST.