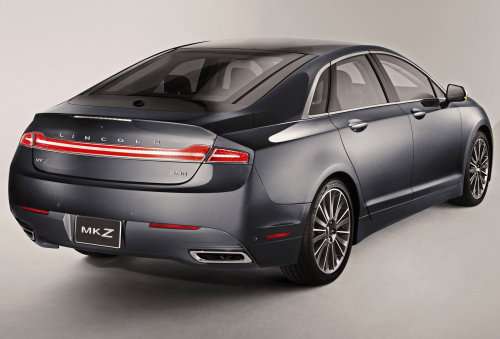 Ford Motor Company has announced that the Environmental Protection Agency (EPA) has certified the 2013 Lincoln MKZ Hybrid at 45 miles per gallon and while this falls a bit short of the 47mpg offered by the 2013 Ford Fusion Hybrid – 45mpg makes the new MKZ Hybrid the most efficient luxury car available in the US market.
Advertisement

The 2013 Lincoln MKZ Hybrid received an official fuel economy rating of 45 miles per gallon whether driving on the highway or around town with a combined figure of 45mpg as well. This makes the 2013 MKZ Hybrid not just the most efficient model in the midsized luxury sedan class but it also makes the MKZ the most fuel efficient luxury available in the US today. Not only does the 2013 MKZ Hybrid beat the other vehicles in the midsized luxury sedan segment – it does so handily.

"The all-new MKZ Hybrid proves that thoughtful customers who prioritize fuel economy and reducing emissions do not need to compromise on luxury, driving quality or advanced technology," said Jim Farley, group vice president, Global Marketing, Sales and Service. "MKZ is our strongest proof yet on what the reinvented Lincoln stands for – beautiful vehicles with compelling and warm experiences that create a clear alternative in today's increasingly competitive luxury marketplace."

In addition to being more efficient than the other vehicles in the midsized luxury sedan class, the 2013 Lincoln MKZ Hybrid is also far more affordable, sharing a price with the non-hybrid 2013 MKZ starting at just $36,800 (including the $875 destination fee). The 2013 Lexus ES300h starts at $39,725, the 2013 BMW ActiveHybrid 3 starts at $50,195 and the Infiniti M35h starts at $55,095 – making the MKZ Hybrid considerably less expensive than the other models in the class while still being vastly more efficient. The Lexus CT200h starts at $32,475 so it is slightly less expensive than the 2013 MKZ Hybrid but it is still less efficient and smaller – especially in terms of rear passenger seating space.

What is not addressed in Ford’s statement proclaiming that the 2013 Lincoln MKZ Hybrid is the most efficient luxury car in America is what happened to the other 2 miles per gallon from the 2013 Ford Fusion. While these two vehicles share a chassis and a 2.0L hybrid drivetrain, the luxurious MKZ comes with standard features that are offered but not standard in the new Fusion hybrid. Things like the standard leather, heated power front seats (and leather rear seats), the 8” touch screen infotainment system, the Lincoln premium 11 speaker sound system and the 18” alloy wheels add luxury and comfort but they also add weight. On the outside, the MKZ Hybrid offers a slightly different design than the Fusion Hybrid while items like the larger wheels and tires take more effort for the engine to turn. Those factors – the added weight, the differing aerodynamics and the heavier wheels – likely all play a part in the slight decline in fuel economy between the two closely related vehicles.

However, for a new car buyer who wants a luxury hybrid with the best fuel economy and lowest price in the luxury class – the 2013 Lincoln MKZ Hybrid is the current kind of the hill.

Anonymous wrote on October 19, 2012 - 4:46pm Permalink
Even though the Fusion and MKZ share the same outstanding platform, it is a vastly different car with many more luxury features, and it is amazing that Lincoln was able to obtain 45mpg combined. The MKZ and MKZ Hybrid will do very well. And when the Energi version arrives, it should have inductive charging, with plug in as a back up. That's Lincoln Luxury....Energized !

LG's New EV Battery Plant Is a Welcome News for Tesla
Tesla Giga Berlin's New Hurdle: It's Not Only the Gov't, but Now Tesla Itself
END_OF_DOCUMENT_TOKEN_TO_BE_REPLACED