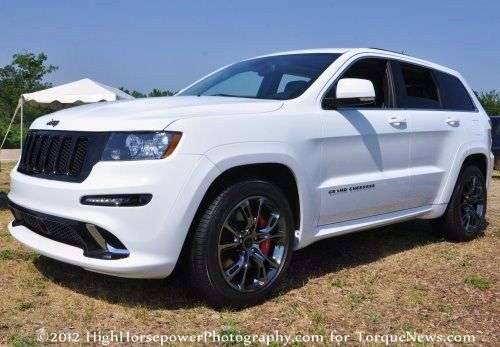 The Chrysler Group has announced that the 2013 Jeep Grand Cherokee SRT8 will be available in two new special edition appearance packages named Vapor and Alpine that center around a pair of striking new paint options along with a bump in power.
Advertisement

Other than those new special edition color packages, the 2013 Jeep Grand Cherokee SRT8 remains relatively unchanged compared to the 2012 model year super sport utility vehicles although the 6.4L, 392 cubic inch Hemi V8 does get a slight increase in power to 470 horsepower and 465lb-ft of torque (the 2012 models had 465hp and 465lb-ft of torque). That powerful engine is mated to a 5-speed manual transmission featuring an AutoStick manual shift mode that utilizes Chrysler’s incredible steering wheel mounted paddle shift system. All of that power is channeled through the 5-speed transmission to all four wheels via the advanced Jeep all wheel drive system. This combines the Jeep Selec-Track with five driver selected handling modes with the Jeep Quadra-Trac all wheel drive system that has been optimized for the high performance duties of the Grand Cherokee SRT8. The result is the best performing Jeep of all time and one of the highest performance sport utility vehicles available in the world.

The 2013 Jeep Grand Cherokee SRT8 is capable of dashing from 0 to 60 miles per hour in just 4.8 seconds while running a standing quarter mile in the mid 13 second range. Thanks to the high tech suspension and all wheel drive system, the 2013 Jeep SRT8 can hit a whopping 0.90g on the testing skid pad and the Brembo brakes allow this full sized sport ute to go from 60 miles per hour to a full stop in just 116 feet. I should also point out that thanks to the Chrysler Fuel Saver system that shuts down four cylinders when cruising on the highway, the 2013 Grand Cherokee SRT8 offers 18 miles per gallon on the highway. Oh, it can also tow up to 5,000 pounds…which is something that most 13 second vehicles around the world can say.

The 2013 Jeep Grand Cherokee SRT8 carries an MSRP of $59,995 plus the $925 destination fee for a total price of $60,920. Adding either the Alpine or Vapor special edition packages will add on an additional $2,495 for a final price of $63,415. Twenty five hundred dollars might sound like a lot of money for an appearance package but considering that new SRT8 owners are already expecting to shell out over $60k for a new high performance Jeep – that extra $2,495 is immaterial for such a great looking pair of packages. I have had the pleasure of checking out the new Alpine and Vapor editions in person and they will certainly stand out in a crowd with their sinister look…even when packing the new Bright White.