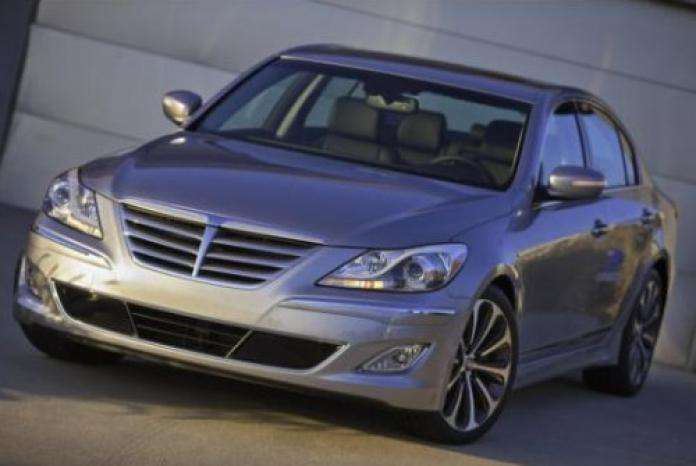 The details on the 2013 Hyundai Genesis sedan have just been announced by the Korean automaker and for the new model year, the biggest change is the lack of the optional 4.6L V8 – leaving just the 3.8L V6 and the 5.0L V8 to power roomy sedan.
Advertisement

The current Hyundai Genesis sedan is offered in four trimlines – Genesis 3.8, Genesis 4.6, Genesis 5.0 and Genesis 5.0 R Spec – with the numbers designating which of the three available engines are under the hood. The 2013 Genesis sedan will do away with the 4.6L V8 altogether and the 5.0L V8 will only be available in R Spec trim, leaving all other 2013 Genesis sedans to be powered by the 3.8L V6. The exclusion of the 385 horsepower 4.6L V8 doesn’t come as a huge surprise, as many Genesis buyers who are forking out “V8 money” will happily opt for the 429 horsepower Genesis R Spec with the 5.0L Tau V8.

The 2013 Hyundai Genesis sedan will be powered by the 3.8L V6 that packs 333 horsepower and 291lb-ft of torque while achieving 29 miles per gallon on the highway. This engine will come with standard, premium and technology packages.

Those who want more power, improved overall performance and more goodies inside and out can opt for the 2013 Hyundai Genesis 5.0L R Spec sedan. This begins with the 429 horsepower Tau 5.0L V8 for plenty of grunt while 19” wheels, enlarged brakes and a sport tuned suspension system improve the handling of the Genesis sedan. On the outside, the R Spec wears unique darkened chrome headlights and badging (in addition to the wheels) while inside, there is a unique all-black leather treatment not offered on the 3.8L models. The 2013 Genesis R Spec sedan is available in just four colors - Black Noir, Titanium Gray, Platinum Metallic, and White Satin Pearl (new for 2013).

2013 Hyundai Genesis 5.0L R Spec and 3.8L Technology models also get a new optional 8” touchscreen infotainment system featuring navigation, multimedia controls and a massive 64GB hard drive. The entire system is controlled via the large control knob mounted on shift panel which, along with an array of buttons, allows the driver easy control of the system without ever taking their elbow off of the arm rest.

The Hyundai Genesis sedan is an affordable option for buyers who love the premium Hyundai Equus but cannot afford the heftier price of the flagship sedan. The Genesis sedan offers a great number of the luxury amenities available in the larger Equus with a price well below that of the range topping sedan. More importantly, the Genesis sedan packs the high performance 5.0L Tau V8 that is easily one of the most impressive aspects of the entire Hyundai lineup.

cardiology news wrote on November 13, 2018 - 10:38am Permalink
Insufficient vitamin D levels were linked to earlier death in older men living in Thailand, according to findings published in Geriatrics and Gerontology International. “A body of evidence has been accumulating about vitamin D status and multiple health outcomes, including falls, fractures, cancer, cardiometabolic diseases and mortality. The literature on the effect of vitamin D on mortality, however, remains inconsistent,” Varalak Srinonprasert, MD, an associate professor in the department of medicine at Siriraj Hospital, Mahidol University in Bangkok, and colleagues wrote. SEE ALSO Vitamin D levels correlate with cardiorespiratory… Lower vitamin D level linked to higher RA disease… Top endocrinology stories: Vitamin D deficiency linked… Researchers analyzed survey data from 2008 in 1,268 older adults (median age, 74 years) from a national database in Thailand, then linked the information to a 2015 vital registry. They found 24.5% of the men and 43.9% of the women had insufficient vitamin D levels, but the low levels were only significantly associated with all-cause mortality in men (adjusted HR = 1.77; 95% CI, 1.25-2.51). In addition, diabetes was a modifier effect in men with diabetes who had insufficient vitamin D levels (HR = 3.34; 95% CI, 1.76-6.33). Insufficient vitamin D levels were linked to earlier death in older men living in Thailand. Source: Shutterstock “Most <previous> studies focused on <vitamin>D insufficiency] and diabetic control or the risk of having concurrent cardiovascular diseases, whereas limited study explored the risk of death among diabetes patients with <vitamin>D insufficiency],” Srinonprasert and colleagues wrote. “Unfortunately, data on the specific cause of death were not available in the analysis of the present study. It was, thus, impossible to prove whether the increased mortality with vitamin D deficiency was related to cardiovascular mortality or not. Although the present study reported a fairly low prevalence of self-reported cardiovascular diseases, it is likely to be a reporting bias.” – by Janel Miller