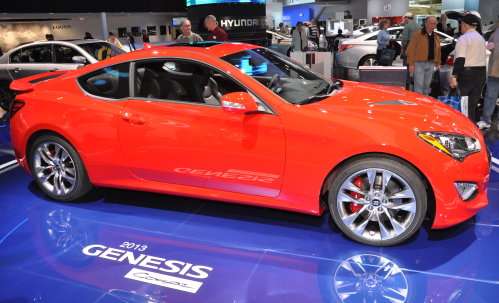 The 2013 Hyundai Genesis Coupe debuts in Detroit with big power

We have known for some time now that when the 2013 Hyundai Genesis Coupe made its grand debut, it would feature a refreshed exterior design but the big news at the ongoing 2012 Detroit Auto Show is the massive power increases for both engine options offered in the 2013 Gen Coupe.
Advertisement

Since being introduced, the Hyundai Genesis Coupe has been offered in two forms – 2.0T with a turbocharged 2.0L 4-cylinder and the 3.8 variant that carries a naturally aspirated 3.8L V6. When introduced, these two engines offered an impressive amount of power but as the horsepower war in America has raged on, the sporty Genesis Coupe found itself falling behind in terms of power output. However, with the introduction of the edgier 2013 Genesis Coupe, that deficiency in power is a thing of the past as the 2.0T will soon offer 274 horsepower while the 3.8L V6 will pack a whopping 348 horsepower – more power than the V6-powered Ford Mustang or Chevrolet Camaro.

The 2012 Hyundai Genesis Coupe 2.0T currently offers 210 horsepower but when the revised 2013 models hit showrooms later this year, 4-cylinder Gen Coupe buyers will receive a 64 horsepower jump to 274hp. Also, in addition to the big power increase, the 2013 Genesis Coupe will dump the old 5-speed automatic transmission in favor of a new fuel-friendly 8-speed automatic transmission featuring a steering wheel mounted paddle shift system. Also, thanks to advances in Hyundai’s engine technology, the 2013 Genesis Coupe 2.0T is expected to offer at least as good of fuel economy numbers at the current, less powerful models. This new engine will be available in the Standard, R-Spec and Premium trimlines when they reach showrooms later this year but hopefully, Hyundai will introduce a Track trimline at some point with features like a Brembo brake package, a Torsen limited slip differential and other go-fast goodies.

Next, the current Hyundai Genesis Coupe with the 3.8L V6 packs 306 horsepower but when the 2013 models arrive, the V6 Gen Coupe will offer an impressive 348 horsepower and like the 4-cylinder models, it will come with a standard 6-speed manual transmission with an optional 8-speed automatic with paddle shifters. Also like the entry level 2013 Genesis Coupe, the 3.8L models are expected to offer this increase in power without any decrease in fuel economy capabilities. The 2013 Genesis Coupe 3.8 will be available in the standard R-Spec trimline, along with Grand Touring and Track trim.

Along with the big power increases across the board, the 2013 Hyundai Genesis Coupe receives a facelift that offers a more aggressive look that fits the familial look seen in other current models like the Elantra and the new Veloster. This includes the large central grille opening in a contrasting dark finish where the current model has a distinct upper and lower grille area and for 2013, the fog lights are split off into their own outer openings as opposed to being integrated into the lower fascia opening. Also, the 2013 Genesis Coupe will feature hood vents that bolster the sporty look of this sleek coupe. Out back, the 2013 Genesis Coupe also gets a new look with some lightly refined taillights but for the most part, the front end shows the bulk of the 2013 refresh.

Check out the gallery on the right by clicking any of the thumbnails for a closer look at the 2013 Hyundai Genesis Coupe (shown in 3.8 form) and stay tuned to TorqueNews.com for all of your automotive news!