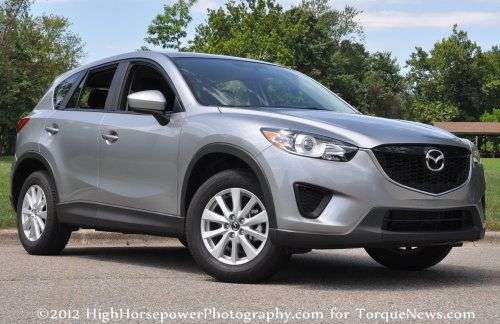 2013 Green Car of the Year finalists are official, diverse

The organizers behind the Green Car of the Year award have announced their finalists for 2013 and while the 5 vehicles in the running for the major award are fairly predictable – the diversity among these five vehicles show how much the “green car” segment has changed in the past few years.
Advertisement

In this day and age, most people in America who think of “green cars” are quick to reserve that classification for hybrids and EVs but the 2013 Green Car of the Year finalists have a couple hybrids and a couple cars powered by traditional – yet extremely efficient – combustion engine-based drivetrains. Rather than strictly looking just at which vehicle offers the best fuel economy, this award looks at “affordable mass-market products that provide drivers full functionality and mainstream appeal.” Those finalists for 2013 include the Toyota Prius C, the Ford C-Max, the new Ford Fusion (2013), the Dodge Dart Aero and the Mazda CX-5.

"This is a very exciting time for the Green Car of the Year program," said Ron Cogan, editor and publisher of the Green Car Journal and president of the Green Car Institute. "For two decades now, Green Car Journal has documented the 'greening' of the auto industry, from a time of mere concepts and demonstration programs to today, when the sheer number of environmentally positive production vehicles available to consumers is just eye-opening."

The Toyota Prius C (for those who are reading this yet somehow are not familiar with that model) is the newest and most compact hybrid from the Toyota Prius family. In addition to offering the great fuel economy that the hoards of Prius owners around the world have come to know and love, the Prius C is more compact and more affordable than the Prius or Prius V. The compact Prius C offers 53mpg in the city, 46 on the highway and 50 combined.

Next is the Ford C-Max, which is intended to be the Motor Company’s first real shot at taking on the aforementioned Toyota Prius. The C-Max offers two forms – a traditional hybrid model and a plug-in hybrid that features greater electric driving range – while also offering more room and significantly more power than the popular Prius (C-Max 141hp, Prius 98hp). Also, with EPA ratings of 47 miles per gallon whether in the city or on the highway – the C-Max is more efficient than the majority of the Prius family in most situations although the Prius C that is also in the running offers a combined figure of 50mpg.

The new Ford Fusion joins the C-Max and with a lineup that includes both highly efficient traditional gasoline drivetrains and a super efficient hybrid package – the new Fusion gets my guess as the vehicle that will win this award in for 2013. The new Fusion Hybrid will offer 47mpg in any setting while the trio of fuel sipping yet powerful EcoBoost 4-cylinder engines offer great performance and fuel economy without the higher price of a hybrid model. In addition to the 47mpg hybrid option, the most efficient non-hybrid 2013 Fusion is the package powered by the 1.6L EcoBoost engine with start/stop technology with an EPA rating of 37mpg on the highway.

The next vehicle in the 2013 Green Car of the Year finalists is the 2013 Dodge Dart Aero. This sporty C segment sedan is fitted with a variety of features to make it the most efficient of the new Dart lineup – hitting better than 41mpg on the highway. Best of all, Dodge has gotten to this EPA rating with a powerful 1.4L turbocharged engine that not only makes the Dart Aero the most efficient non-hybrid in its class but it also among the most powerful. I do find it interesting that the award jury picked the entire Fusion lineup but just a single trimline of the Dart considering that even the non-Aero Dart sedans powered by the 1.4L Fiat engine still offer better than 40mpg on the highway.

Finally, perhaps the most surprising vehicle in the award finalists is the Mazda CX-5 powered by the SkyActiv 4-cylinder engine (shown above). While most people immediately discount sport utility vehicles of any kind when talking about highly efficient engines, the CX-5 with the 2.0L SkyActiv-G engine, front wheel drive and a manual transmission is the most efficient SUV available in the US with an EPA rating of 35 miles per gallon on the open road. I have spent time in this model and 35mpg is a very realistic figure when driving normally and best of all – Mazda didn’t strip this crossover down to reach those figures so the CX-5 will do everything that other utes do but it will get the best mileage while doin’ it. This is a long shot considering the level of competition but if you consider the fact that the Chevrolet Tahoe Hybrid won this award in 2008 with a hybrid V8 drivetrain that only offered around 22mpg – the CX-5 definitely has a chance.

The winner of the 2013 Green Car of the Year award will be announced in November at the LA Auto Show.