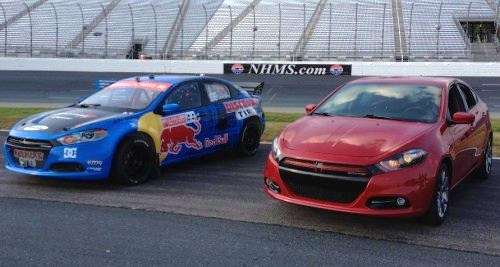 This past weekend marked a major milestone in the life of the 2013 Dodge Dart as Travis Pastrana took his Discount Tire/Red Bull Racing Dodge Dart rally car to the winner’s circle for the first time – dominating the field at the 4th event of the Global RallyCross season at the New Hampshire Motor Speedway.
Advertisement

Saturday evening brought us the 4th event of the 2012 Global RallyCross season and for the first time this season, Travis Pastrana and his Discount Tire/Red Bull Racing #199 Dodge Dart was able to avoid mishap – dominating the field as he drove to his first victory since coming over from the Subaru camp.

The Global RallyCross event at New Hampshire Motor Speedway brought us the most exciting course design of the 2012 season with a trio of jumps in varying sizes (one of which spanned a 65 foot opening over another part of the course), a car wash, a sand-filled turn and an elevated hairpin OVER the speedway pit road wall that I hope to see more of at future events. This latest event also featured the customary slalom (that proved to be quite a problem for some drivers) along with a high speed straightaway that led into the brutal elevated hairpin – all of which worked together to make for the best course from a spectator’s standpoint. This event had a handful fewer cars than previous events so there were only three heat races and the last chance qualifier before the big final race. Missing from the field was series front-runner Marcus Grönholm and young gun Toomas Heikkinen (both hurt at the X Games) along with Hyundai driver Rhys Millen (unclear why he did not compete).

The first heat race of the 4th Global RallyCross event of 2012 was fairly uneventful with Tanner Foust and David Binks in their Ford Fiesta team cars finishing first and second while Stephan Verdier finished third in his Hyundai Veloster. Svere Issachsen did not finish the heat race, sending him to the last chance qualified with Verdier.

The second heat race of the day brought out fan favorite Ken Block and 2011 X Games champ Brian Deegan in Ford Fiesta rally cars and they were joined by Subaru drivers Dave Mirra and Patrick Moro along with Saab driver Andy Scott. The start was fast and as Deegan and Block headed into the early slalom, Saab driver Andy Scott did what he did best as he slammed into Ken Block’s left rear corner – sending Block headlong into the tire barrier. This contact took Scott out of the race with a right front wheel issue while Block’s Fiesta was badly damaged. The race was red flagged to removed the damaged cars and repair the course and for the restart, only Mirra, Moro and Deegan lined up.

Much like he did in the first start of the second heat race, Brian Deegan got a great start and really had no competition throughout the rest of the heat race as he walked to victory – securing his spot in the finals. At one point, Dave Mirra had gotten within striking distance but as he brought his Subaru Impreza out of the last turn, he clipped the wall just before heading over the table top jump and when he landed awkwardly, he blew out one of his rear tires. Luckily, Moro had dropped out of the race so Mirra only had to baby the car around the track to finish second and advance to the finals – although he did have to jump the 65 foot gap jump on three tires to get his “free pass” to the finals.

The third and final heat race of the 2012 Global RallyCross New Hampshire event brought out five news cars including Travis Pastrana in his 2013 Dodge Dart rally car, Samuel Hubinette in the Saab 9-3, Liam Doran in a Citroen rally car and Subaru drivers Bucky Lasek and Richard Burton. When the green flag dropped, Hubinette got an early jump in his Saab so the race officials black flagged the race and made the field start again with Hubinette being sent to the rear of the field.

On the second start, everyone got out cleanly and as the field headed through the first few corners, it was once again Travis Pastrana and Samuel Hubinette going head to head for the top spot. As the two went came out of the last turn on the course and headed towards the table top jump, Pastrana got a bit wide and allowed Hubinette to pull even – sending the two drivers over the short jump side by side. This door to door action continued as the two blasted down the straightaway and as they entered the unique elevated hairpin that took them up and over the New Hampshire Speedway pit wall, Pastrana out-broke Hubinette and got inside of him – giving him a soft bump in the rear and making room for his #199 Red Bull Racing Dodge Dart to get inside and reclaim the lead. It was clear racing from there on out as Pastrana drove away with the heat win while Hubinette finished second to secure a spot in the finals. Lasek, Burton and Doran would all head into the last chance qualifier.

The LCQ (last chance qualifier) had a massive field with all of the drivers who failed to finish in the top two during their respective heat race. The field included Ken Block, Stephan Verdier, Patrick Moro, Bucky Lasek, Liam Doran, Andy Scott and Svere Issachsen, with Block and Verdier both getting great jumps on the start as they led the field through the first series of turns. Block and Verdier raced closely throughout the short race but by the end of the sprint, Block had dropped to third as Liam Doran took the second spot and Verdier walked away with the win. Luckily, the LCQ advanced 4 drivers to Block went on, along with Saab racer Andy Scott.

The field for the final race of the 4th event for the 2012 Global RallyCross season featured 10 drivers in a 4 row starting formation. In the front row we had Travis Pastrana, Tanner Foust and Brian Deegan. In row two, we had David Binks and Samuel Hubinette. In the third row we had Stephan Verdier, Liam Doran and Dave Mirra and in the last row we had Ken Block and Andy Scott. Remarkably (even with Andy Scott in the field), all ten cars made it cleanly through the slalom on the first lap with Foust, Pastrana, Binks, Deegan and Hubinette pulling away from the second group when the other five drivers in the field opted for the required “long cut” on the first lap. Foust would lead the field early with Travis Pastrana close in tow and as the two entered the treacherous elevated hairpin, Foust appeared to over-brake a bit and Pastrana gave him enough of a bump to allow the Dart to get inside and take the lead as they headed towards the slalom and the 65’ jump. Pastrana began to pull away as Foust was forced to do battle with his teammate David Binks and Sam Hubinette.

On the next lap around, Foust, Binks and Hubinette all stacked up in the elevated hairpin and Binks was the loser in the group as Foust and Hubinette both ran off to battle for second – a battle which ended quickly as Hubinette took second and began working on catching up to Travis Pastrana and his stunningly quick Dodge Dart rally car. The closest the two got was on the last lap when Pastrana took his Dart rally car through the required long-cut – allowing Hubinette to get close but it wasn’t close enough as Travis held off the Swede for his first win of the 2012 Global RallyCross season and the first motorsports victory for the new 2013 Dodge Dart. Hubinette finished a close second followed by Brian Deegan in third, Tanner Foust in fourth and Ken Block rounded out the top five. The full results for the event are listed below.

This was a massive win for Travis Pastrana and his #199 Discount Tire/Red Bull Racing Dodge Dart as he has been among the fastest cars in the field all season but with cheap-shot wrecks taking him out of the first and third event of the season along with a separated shoulder suffered in the second event – this was the first time that Pastrana could really show off just how good his new Dart rally car can be.

The fifth and final race of the 2012 Global RallyCross season takes place on September 29th, when the GRC takes to Las Vegas Motor Speedway. The GRC has not updated their season standings section on their official website but we have done some quick math and it looks like Tanner Foust has maintained his lead with Sam Hubinette moving into second and Brian Deegan is now third. GRC awards 20 points to a driver for an event win along with 1 point for winning a heat race (LCQ does not count) so a driver has the potential to get 21 points in an event. Based on that, Tanner Foust’s 62 points will allow only Hubinette, Deegan, Grönholm and Binks a shot at catching him for the championship win. Ken Block, who currently sits in 6th place with 39 points is mathematically unable to catch Foust for the championship along with all other drivers sitting below Block in the standings now.

BRIAN AND MARI... wrote on December 18, 2012 - 12:33pm Permalink
HEY EVERYONE MUST KNOW THE TRUTH ME BRIAN DEEGAN AND TRAVIS PASTRANA WE PISS ON EACH OTHER IN THE SHOWER ITS A SEXUAL THING WE LOVE TO DO WE EVEN SUXCK EACH OTHERS BALLS AND DICK WE ARE LOVERS. MARISSA DEEGAN FINDERS LITTLE GIRLS PUSSY AND MASTERBATES LITTLE BOYS OUR KIDS WELL U KNOW THEY COPPY THERE PARENTS COUSE THEY WATCH AND LEARN

LG's New EV Battery Plant Is a Welcome News for Tesla
Tesla Giga Berlin's New Hurdle: It's Not Only the Gov't, but Now Tesla Itself
END_OF_DOCUMENT_TOKEN_TO_BE_REPLACED