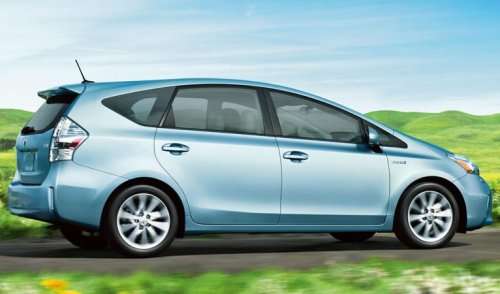 I recently spent time in a loaded up 2012 Toyota Prius V Five models and while the roomy hybrid was as fuel efficient as I had expected – the larger Prius was actually a great deal more powerful than I had expected.
Advertisement

I love performance cars and the majority of the cars that I have owned in my life have been rear wheel drive, V8 powered coupes so something like the 2012 Toyota Prius V Five is not the kind of vehicle that I would expect to get my blood pumping…and it doesn’t. However, for someone who is more concerned with getting great fuel economy while still having legitimate seating for four adults with cargo space to boot, the Prius V makes a very strong case for itself. This is a car that can very easily average over 40 miles per gallon (combined) with plenty of room for both passengers and cargo – with gadgetry that makes for a very friendly environment on long rides.

The Exterior
The 2012 Toyota Prius V Five is the largest offering in the Prius lineup but the Japanese automaker has created this roomy Prius wagon/minivan without giving it a bulky exterior design. In fact, the exterior changes other than the longer roofline are so subtle that the average consumer wouldn’t be able to tell the difference between a Prius and a Prius V when passing on the road.

Across the front end, the 2012 Toyota Prius V Five is closely modeled after the traditional Prius. This begins with the sharply angled headlights with silver bezels and projection style lighting units with driving lights mounted vertically towards the outer edge of the front fascia. The Prius V has a slightly different lower fascia opening along with pair of larger openings flanking the Toyota hybrid logo on the nose of the vehicle. Like the other Prius models, the 2012 Prius V Five has a slippery hood that almost seamlessly blends into the windshield line and up into the roof. The roof is the first major difference between the Prius and Prius V, with a roofline that extends towards the rear of the car further before angling down – although this roomy Prius V offers similar aerodynamic properties to the original Prius. Unlike the smaller Prius, the Prius V roofline barely tapers down before it comes to an end just above the spacious rear window.

Overall, the 2012 Toyota Prius V Five has a slightly more upright design than the smaller Prius but it does so without making it look like an awkward minivan/station wagon. While the added weight of the Prius V Five pulls down the fuel economy a bit compared to the smaller Prius, the larger body wears the recognizable design of the Prius family and still offers eco-friendly aerodynamics.

The Interior
During my time with the Toyota Prius V, I was fighting what may have been the worst cold of my life. It was a miserable week spent driving to and from the doctor’s office as I battled chills and a fever that left me constantly switching between turning on the heated seats and opening the windows for fresh air. You probably know that when you are sick, you don’t want to be climbing up into a vehicle to get in (like with a pickup) or trying to climb up out of a vehicle (like with many small cars) but the Prius V offers easy straight-in access to the front and rear seats. On top of that, the extra room makes loading kids or cargo into the back seats very easy. If you need more cargo space than seating space, the rear seats fold down to create a massive cargo area that runs from the back of the front seats back to the rear hatch. Even though this is a fairly small car, the front seating area offers plenty of leg room, head room and elbow room for the driver and front passenger. Finally, there is the gorgeous panoramic moon roof that offers front and rear riders a look at the sky via this dual-unit glass roof.

The 2012 Toyota Prius V Five is equipped with a 6.1” touch screen infotainment system that features a state of the art stereo system (AM/FM/satellite/MP3) pumping sound through a great sounding JBL 8-speaker system along with an easy to use navigation system for a stock sound system, the Prius V Five JBL setup booms so those audiophiles who want a solid stock system in a fuel sipping hybrid – the Prius V is not likely to disappoint. All of these features can be controlled via the large touch screen along with the buttons and knobs mounted around the screen as well as the steering wheel mounted buttons or the integrated voice command.

Much like the infotainment system, the HVAC system of the 2012 Toyota Prius V Five is very user-friendly with the whole system being controlled by a large knob/joystick mounted on the center stack, right below the slim HVAC screen. The large knob can be pushed side to side like a joystick to toggle between the air direction, the desired internal temperature and the fan speed and once you are on the setting that you wish to change – turning the knob changes that setting.

If you are someone who likes a lot of little nooks and places to stow things, the 2012 Toyota Prius V Five is guaranteed to please. In the front seating area, there is an upper and lower glove box, a roomy center armrest storage space, a small pocket under the center stack, a cubby on the left side of the steering wheel that will fit a small cell phone and the customary door pockets. The rear seating area has a couple places to pack items including the seatback pockets and door pockets. If you have small items that you do not want sliding around in the rear cargo area, there is an under-floor storage area with tons of secure space just inside of the rear hatch.

Every aspect of the 2012 Toyota Prius V Five just screams family friendly with easy loading of little ones or the elderly alike and gobs of cargo space for a trip across town or across the country. Add to that the booming JBL sound system and the advanced infotainment system with a 6.1” touchscreen and the Prius V Five is an affordable hybrid that leaves you asking for very little.

The Drive
Before I drove the 2012 Toyota Prius V Five, I expected it to be sluggish and sterile in an effort to be as fuel efficient as possible but the roomier Prius has a surprising amount of spunk. With 134 horsepower from the hybrid drive system and 105lb-ft of torque, you wouldn’t expect that the Prius V would not be particularly quick and while you aren’t going to win many drag races with muscle cars – the Prius V has enough gusto to accelerate quickly to highway speeds without the fear of being run over by a fast-moving tractor trailer. Also, in the right conditions, the Prius V will chirp the tires a bit.

When you start the 2012 Toyota Prius V Five, it is as silent as the rest of the Toyota hybrid lineup and provided that the car was warmed up, I was able to drive around our subdivision purely in the whisper quiet EV mode. EV Mode works up to 25 miles per hour provided that you do not attempt to accelerate too quickly and for the type of driving that someone should be doing in a small, tight subdivision – the Prius V’s EV Mode is perfect for gasoline-free driving. This mode is also ideal when you get stuck in rush hour traffic on the highway as when slowing moving forward, you are not using any gasoline until you top 25mph. Compared to a traditional non-hybrid vehicle, this was one of the areas where the Prius V really flourished as there is no concern of burning gas while sitting in traffic. Plus, the JBL sound system and the Prius’ infotainment system makes sitting in traffic more tolerable.

When cruising on the open road, the 2012 Toyota Prius V Five offers a nice, smooth ride with very little road noise transferred through the chassis when cruising at 70 miles per hour. Even with only 134hp, the Prius V doesn’t feel like it struggles to keep up with fast-moving traffic and we have been told that the Prius V will pretty easily top 100 miles per hour on a long straight stretch of roadway. Around town, the Prius V Five accelerates smoothly and hops from EV Mode to normal drive mode seamlessly. If you want even better fuel economy, you can activate Eco mode which improves fuel economy by softening the throttle response and smoothing the flow of gasoline – preventing jerky throttle inputs that can cause decreased fuel economy. The result is a car that can comfortably seat four adults and during real world testing – I averaged 43.8 miles per gallon over the course of 8 days. I averaged better fuel economy than the EPA expects (EPA combined is 42mpg) and that is incredibly impressive as I do not drive with fuel economy in mind. I am always in a hurry and I drive accordingly but even with the majority of my driving done on the upper edge of the speed limit – I was still able to easily reach and exceed the EPA fuel economy figures. I suspect that a Prius V driver who was really being gentle will have no problem vastly exceeding the fuel economy figures laid out by the feds.

The 2012 Toyota Prius V Five isn’t a sports car and it doesn’t drive like one but it packs enough power to easily keep up with fast-moving traffic while also offering real world fuel economy better than 40mpg. I love driving high performance cars and I expected that the Prius V would be a super bore but in reality, it was a much more pleasant vehicle to drive than I had expected.

The Final Word
Ultimately, Toyota is the kind of the hybrid hill right now and that success has been based on the Prius. The 2012 Toyota Prius V Five brings a great many features to the roomy hybrid which, unlike the original Prius, offers enough passenger room in the rear seat to comfortably seat two adults – or offering lots of space for two kids without them being jammed against each other. The odds are good that if you are in the market for a new hybrid, you plan to make a stop at your local Toyota dealership and if you want more room than is offered by many hybrids on the market today (or the traditional Prius), the Prius V packs the room and fuel economy of a bigger vehicle sans the bigger price tag.

Add to the incredible fuel economy for a vehicle of this size and the loads of interior goodies including an advanced touchscreen infotainment system, a JBL sound system and heated front seats and you have a hybrid that affords you better than 40 miles per gallon without skimping on the amenities. Most importantly, this hybrid packs enough power to allow the driver to merge into fast-moving traffic or to step out around slower-moving traffic with a concern of the vehicle having the capacity to do so. The Prius V left me with no questions as to why the Prius family is the most popular and bestselling hybrid family in the world. Many people who have not driven the Prius will label it as being boring and unpleasant to drive but as hybrids go, the Prius V is the latest example of why Toyota has long dominated the hybrid segment around the world – combining their legendary hybrid technology with the roomiest Prius interior yet.