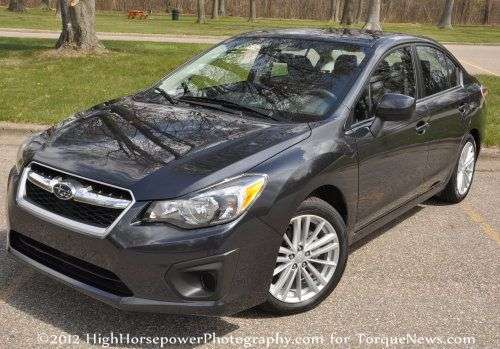 Many new car shoppers do much of their research online and while the 2012 Subaru Impreza may not turn heads based on its specifications – this is a vehicle that you need to drive before removing it from your short list due to impressive acceleration, incredible fuel economy, lots of room and the surefootedness of Subaru’s all wheel drive system.
Advertisement

The 2012 Subaru Impreza is all new, with the biggest changes coming in the exterior design and the drivetrain. The dimensions were increased inside and out, giving the Impreza a larger feel than other sedans in the C segment and power has been decreased from the previous model year with the introduction of the new 2.0L Boxer engine. This doesn’t sound like a sound recipe for success – making a small sedan bigger and taking away power – but the end results is a car that is surprisingly peppy while still offering well over 30 miles per gallon.

The Design
The Subaru Impreza has always been the base model of the WRX and WRS STI, which feature all wheel drive and high performance turbocharged engines to thrive in a variety of racing venues but starting in 2012 – the Impreza is a vehicle of its own that the company hopes will draw more attention for being efficient than powerful. Even with that in mind, the 2012 Impreza has an edgier look than the outgoing models with long, angular headlights and hard body lines that make it look more like the larger Legacy sedan. The pronounced front line of the hood cuts down into the headlights, producing an angry look and the angled upper and lower grille openings complete the sporty look up front.

While the 2012 Subaru Impreza looks a little bigger than the outgoing 2011 model year sedans, it is still smaller than the Chevy Cruze in overall length, width and height. The sidelines have sharp angled flares that are filled nicely by the 17” wheels included in the Alloy Wheel Package. The front and rear doors all open nice and wide, allowing easy loading into the rear seating area. Out back, the Impreza has a very short looking trunk lid but the tall rear end sits quite a bit higher than the front; providing for a very sporty stance. More importantly, even with the short trunk lid, the long sloping rear window area provides for a ton of cargo space in the trunk of the new Impreza sedan.

The impressive amount of space isn’t only found in the trunk, as the interior of the 2012 Subaru Impreza is very roomy for a car of its size. There is enough leg room for front and rear passengers that even with the front seats moved back to the point where a 6 foot tall driver and front passenger had room to sit comfortably; there is enough room in the back seat for rear riding passengers to stretch their legs. The long roofline and long rear glass also allow for a good amount of head room for rear passengers so unlike some C segment sedans that crush passengers into the back seat – the Impreza can truly comfortably seat four adults.

Our 2012 Subaru Impreza test car was a 2.0i Premium equipped with option package 27. This means heated cloth seats up front, a 60/40 split rear seat, power windows, a power moonroof, a leather wrapped steering wheel with audio controls and a fairly standard stereo system. The Impreza doesn’t come standard with a massive touch screen like some models but the standard stereo head unit is very easy to use with AM/FM/Satellite, CD and Auxiliary input capabilities while the HVAC system features an equally easy-to-use three knob setup. Those drivers who are turned off by the high tech and often over-complicated dash controls…this is an interior that you will love. Things are laid out in a very minimalistic manner but the Impreza really doesn’t leave much to be desired for those who don’t lust after the high priced infotainment touch screens. One nice feature of the Impreza interior is storage space, with cubbies at the bottom of the center stack, under the arm rest and to the left of the steering column joining the traditional map pockets in the doors for those who like to have lots of storage space within reach of the driver.

The Drive
On paper, the 2012 Subaru Impreza doesn’t look like a vehicle that is going to offer particularly inspirational driving but this is definitely a case of not passing judgment before you’ve experienced the vehicle. The new 2.0L Boxer engine offers just 148 horsepower – down from the 170hp offered by the previous base Impreza – and in true Subaru tradition all wheel drive is still standard. However, the Impreza offers a great deal of acceleration from a stop and on the open road when the need comes to put the hammer down. Our test vehicle was equipped with a 5-speed manual transmission which is a feature that we would definitely give a ‘thumbs up’ to for anyone considering a new Impreza. Even if you aren’t particularly experienced with a stick shift, the manual transmission in the 2012 Impreza is very easy to drive and features like a hill-holder that prevents the car from rolling backwards from a dead stop would be ideal for someone who wants to get into their first manual transmission vehicle. More importantly, the manual transmission makes for an added level of fun to drive factor, bolstering acceleration on the bottom end and offering 34 miles per gallon on the open road.

Subaru hopes for the Impreza line to separate itself from the high performance WRX and STI variants, instead gaining a reputation for being a highly fuel efficient vehicle in and my experiences – the car certainly performs that task. Through several tanks of gasoline, I routinely averaged better than 30 miles per gallon and during one tank where there was heavy highway cruising (around 75mph) – I managed 32.3mpg. However, the efficient new Boxer engine still allows the 2012 Impreza to easily eclipse the 100mph barrier while dashing off the line pretty quickly as well. This is not a vehicle that sacrifices drive quality for fuel economy, as I enjoyed my time spent driving the new Impreza.

In addition to offering strong acceleration from a stop and at speeds, the all wheel drive system in the 2012 Subaru Impreza offers great traction during stints of spirited driving. The steering is quick and responsive and even though the new Impreza is a bit larger, it is still plenty nimble – cutting through turns smoothly and making sharp turns comfortably – while also offering a nice smooth ride on the highway. There was no snow or slippery conditions during my time in the 2012 Impreza but I did spend some time on one the of the local “natural beauty roads” (that means they are dirt, FYI) after extended rains and the all wheel drive system dealt with even the sloppiest dirt road conditions. I could just envision myself racing through the woods in the Impreza covered in Subaru rally racing livery while my co-driver instructed me as to the next turn when, in actuality, I was tolling around the muddy unpaved roads of Milford Michigan. In any case…the 2012 Impreza definitely seemed like a vehicle that would be right at home for those who spend lots of time trekking into the woods.

The 2012 Subaru Impreza is all new, with a new exterior design and a new engine that focuses more on efficiency than performance but it doesn’t mean that the Impreza takes the fun out of driving. Someone who is easier on the accelerator than I am can easily expect to average well over 30 miles per gallon year round – with Subaru’s tried and true all wheel drive system providing sure footing in rough weather. Also, unlike some C segment cars that offer cramped seating for rear riding passengers, the 2012 Impreza is an ideal vehicle for someone who wants to really be able to seat four adults comfortably.

LIdriver wrote on May 1, 2012 - 11:27am Permalink
I purchased a 2012 Impreza Sport Premium 5M only two weeks ago. I have also a 2003 Forester XS 5M. I do the exact same roads every day and frankly I am extremely disappointed: the Impreza in the first two tanks ran an average of 20.5 and 21.5 mpg. I know it is a new motor and so on, but, I never had such a poor mpg with the 2.5 L of the Forester. Plus the Forester is much peppier. I was expecting a mpg around at least 26-27 with the Impreza, considering Subaru is trumpeting an average of 25-36mpg with the manual transmission. I live in a suburban area, so there is no justification for this terrible consumption. I do not think i am the only one complaining ...... a case of false advertisement or at least a misleading one?
Greg wrote on June 4, 2012 - 6:38pm Permalink
Must be how your driving it. I Also have a 2012 Impreza 5M and usually average about 29.0 mpg. I do have the Canadian version (because I live in Canada), but im sure the gas consumption is the same. The only difference is that there is a full color screen that shows many different statistics on how your driving, which allows a person to learn how to drive economically, and change their driving habits accordingly. I can say that I did expect better gas mileage then I get, but 700 km per tank (just under 450 miles) is about average for every tank, and I'm learning to be happy with that. I'm a 26 year old male, so don't think I drive it like a 90 year old grandma. I push it on highway on ramps, passing others, and I usually drive in an almost rushed manner...I have two speeding tickets to prove it. Some steps I take in decreasing gas mileage include paying attention to the lights ahead of me. If I see a red light in the distance I usually just let of the gas and coast, or put the gear into Neutral and coast until I feel I am going to slow or reach the light. The Subaru Manual also has some tips on more conservative driving and what speed to shift at, which all adds to better gas consumption.
Anonymous wrote on May 7, 2012 - 4:02pm Permalink
I, too have a `2012` Impreza Sport and am really disappointed with the gas mileage. After 3500 miles, I'm stil getting less than 22 miles in combined driving; even when that includes more than 75% highway miles for the tank. I traded a Honda CR-v AWD, which got better mileage...not much but better. I previously had 4 Outbacks which all got slightly better gas mileage. My Subaru's have always been "higher maintenance" than Toyota's or Honda's. Was really looking forward to a better gas mileage AWD, but that looks like it isn't gonna happen. What a disappointment. R.
Anonymous wrote on May 8, 2012 - 4:39pm Permalink
I'm getting 28-29 mpg out of mine with 500 miles and I drive it like I stole it... The new timing chain cam driven FB20 motor will be much more maintenance free than the old belt driven motors. Give it time.