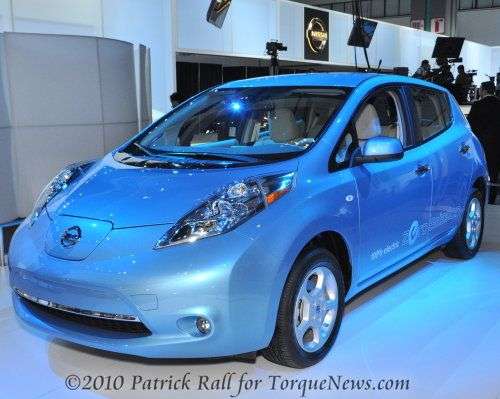 The 2012 Nissan Leaf gets a healthy price increase

Nissan is still struggling to meet the first 20,000 orders for their innovative 2011 Leaf electric vehicle but as the 2012 model year nears; the Japanese automaker has announced that the segment-leading Leaf will see price increases across the board.
Advertisement

The key advantage that the 2011 Nissan Leaf holds over the 2011 Chevrolet Volt is the price – starting over $7,000 cheaper than the Volt. Even though the Leaf’s lack of a range extending gasoline engine limits the car to being more of a commuter vehicle, the Leaf has outsold the Volt and there is no denying that the huge price difference in one of the reasons. However, for the 2012 model year, the gap between the Leaf and the Volt will tighten up as the entry level Leaf will carry a starting price of $36,050 compared to just $33,630 in the current model year (both with destination fees). Including destination charges, the Volt starts at $41,000 so provided that GM doesn’t announce a huge price increase of their own – the difference in price could drop below $5,000. That is still quite a bit of money but considering that the Volt allows you to drive without range anxiety, the Chevy still has a vast advantage in overall capabilities.

While no one likes to hear about price increases, the 2012 Nissan Leaf will benefit from more than just a bigger price. The 2012 Leaf will feature a standard cold weather package that adds seat and steering wheel warmers, as well as a battery warming system. Also, the higher end Leaf SL will come standard with a quick-charge port that allows the owner to charge the battery system up to 80% capacity in around a half hour. According to Automotive News, Nissan claims that 93-94% of the Leaf electric vehicles sold thus far are SL models optioned with the quick charge port so even though Nissan is jacking up the price for 2012 – it comes with a few features that most consumers can appreciate.

Nissan has also announced that they will reopen the online reservation form for US buyers sometime this fall for those folks in Connecticut, Colorado, Massachusetts, New Jersey and New York and by the end of the 2011 calendar year, the company plans to have retailers set up in Delaware, Indiana, Louisiana, Nevada, Ohio, Pennsylvania, and Rhode Island.

Fontana Nissan wrote on July 19, 2011 - 1:12pm Permalink
The biggest deal about the new Nissan Leaf is the charging feature; it can now be charged in just 30 min. Before it was an option but many consumers were opting for it so I guess Nissan decided to make it a standard feature. I still think a price difference of $5k is pretty substantial and will prompt many buyers in choosing the Leaf over the Volt. Economy is still tough and 5k is a big price difference.
@bobbleheaguru wrote on July 19, 2011 - 4:13pm Permalink
Interesting points. However, I would like to challenge the following statement: "there is no denying that the huge price difference" is one of the reasons for the sales difference. Supply, not demand is driving sales numbers for both of these vehicles. GM's plant has been shutdown for a month to retool for a huge volume increase (a 12x increase from less than 5000 to over 60,000 in 2012). It is also giving Volts to dealers instead of selling them to get more people to take test drives... even though they have taken a short term sales hit by doing this (though they are probably boosting sales of Cruzes by getting people to test drive Volts, then drive out with Cruzes). GM has stated that their goal is to sell 10,000 Volts in 2011. It looks like they will hit or exceed that number, when the plant opens up again. Nissan has a similar goal for Leafs and will likely hit their number as well. Both Volt and Leaf dealers can sell every available car at list price (or higher in some cases). I ordered a Volt in early June and do not expect to get it until October. GM has already announced that the Volt will go DOWN in price to $40K. The lease rates on the vehicles were nearly identical for 2011 MY (~$350/month, Volt with $2500 down... Leaf was less down, 12K miles per year). Leaf will now have a $370/month payment. With the price increase for the Leaf and the drop for the Volt, the big question is whether the Volt will have a lower lease payment. Lease will be a very big deal because consumers do not have to worry about filing for the Tax Credit (the $7500 is already baked into the lease), and they do not have to worry about battery replacement or new technology advances that will make their vehicle obsolete. Here is my take on why I am getting a Volt. http://bobbleheadguru.com @fontana In the future the Leaf (and Volt) can be charged quicker, but not with current technology in homes/offices.