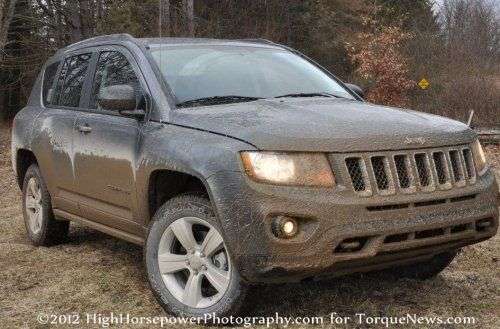 The 2012 Jeep Compass Latitude 4x4 sports the refreshed Grand Cherokee-like front end, a roomy interior and a fuel friendly drivetrain for those buyers who want the go-anywhere capabilities of the Jeep brand with less impact on the checkbook.
Advertisement

The Exterior
The Jeep Compass has been around since the 2006 model year but when the Chrysler Group refreshed the front end of the compact Jeep to look more like the flagship Grand Cherokee. From 2006 to 2010, the Jeep Compass (which was new at the time) had a front end that carried a look more alike the Jeep Wrangler, with the tall grille openings flanked by round headlights sitting high on the corners of the front end but beginning with the 2011 model year, the Compass offers a look nearly identical to the Grand Cherokee with a slimmer grille and angular headlights. This new front end was likely a major part of the boom in sales of the Compass from under 16,000 in 2010 to almost 48,000 in 2011. That is a pretty significant improvement and the great looking front end of the 2012 Compass was a wonderful decision by the Jeep designers. The 2012 Compass also features bright projection style foglights that are located higher on the front fascia and more towards the outer edge – offering better lighting in poor driving conditions.

Aside from the new front end, the 2012 Jeep Compass looks very similar to the previous generation of the compact SUV. The rear bumper area of the 2012 model is more chiseled than the pre-2010 models with similarly shaped taillights but LED technology makes the taillights of the 2012 models much brighter for better visibility. Along the side, the Compass has large doors that allow for plenty of room for passengers to climb in and out while also making it easier to load larger cargo into the back seat. The rear hatch of the Compass also leaves lots of room to fit large items into the rear cargo area of this compact SUV. The rear door handles are located on the door frame, giving the rear doors a “shaven” look which is an interesting touch.

In short, the exterior changes made to the Jeep Compass for the 2011 model year (which have been carried over for the 2012 model year that is being discussed here) went a long way in making this compact SUV look far more masculine. The design of the Compass effectively presents owners with a chance to own a mini- Grand Cherokee and the design has clearly resonated well with sales being better than they ever have been in the history of the model.

The Interior
Inside, the 2012 Jeep Compass Latitude 4x4 offers comfortable seating for four and if you have three very friendly people in the back seat, you can fit a fifth person in the back seat. That rear seat has a 60/40 design that allows different configurations available by folding down those back seats to offer more cargo space or room for longer objects while still affording the ability to seat someone in the back while using that extra cargo space. Overall, when the entire backseat is folded flat, the Compass offers almost 54 cubic feet of cargo space. Our test Compass was came with the standard cloth seats with the slate grey interior finish and while these had manual controls, they did offer a heated seat function that was appreciated in the cold Michigan winter.

Our 2012 Jeep Compass Latitude 4x4 was equipped with the standard stereo system with AM/FM, CD, MP3 and Satellite radio capacities so while there is no fancy touch screen with this package; the Compass Latitude does come with steering wheel mounted controls for the stereo system and the cruise control. This allows the driver to keep his or her hands on the wheel when adjusting the musical selection or when using their Bluetooth phone – if equipped. The heating, defrosters and air conditioning are controlled by a trio of nice, large knobs that are very easy to use without looking away from the road. One knob controls the fan speed, one controls the temperature (including a button for the A/C) and one controls the location of where the air is aimed so unlike some HVAC systems that can become a confusing button-fest, the Compass keeps things nice and simple. Finally, with cubbies in the front door panels, the rear door panels and in the passenger’s side of the dash, there is plenty of space to place items in the vehicle without cluttering up any of the four cupholders. Overall, for a compact SUV that carries a price tag under $26,000, the 2012 Jeep Compass Latitude offers a comfortable, spacious interior with a solid standard sound system with a touch of high tech added by the steering wheel controls.

The Drive
The 2012 Jeep Compass Latitude 4x4 is powered by a 2.4L 4-cylinder equipped with dual variable valve timing to produce 172 horsepower and 165lb-ft of torque while still reaching EPA fuel economy estimates of 20 miles per gallon around town, 23 on the highway and a combined figure of 21mpg. In our tests, we found that on average during the course of a tank of gas with a pretty even mix of highway and city driving, the Compass was always between 20-22mpg. This puts it right within the expected range and with a little lighter foot; I would expect that the Compass could exceed those EPA fuel economy numbers. Unfortunately, I have a tendency to have a heavy right foot but I was still impressed with the fuel economy numbers experienced.

Our Jeep Compass Latitude 4x4 came with the Freedom Drive II package which includes a continuously variable transmission with an off-road crawl ratio and hill start assist for ease of use in a variety of conditions. We didn’t do any offroading with the Compass but we were able to take a tour of some of the sloppier unpaved roads in the Milford, Michigan area. A few days of rain and snow made for some treacherous conditions on the back roads in the area and the Compass performed very nicely – even in some of the messiest road conditions. In our experiences, the Compass did a fine job of earning its “Trail Rated” badge and even though we stuck to public (yet very muddy) roads, considering that these are likely the worst that the average driver will see in their daily travels, the Compass will do a great job of keeping the family moving while driving over the river and through the woods.

Out on the open road, the 2012 Jeep Compass Latitude 4x4 offered a surprisingly smooth ride although it does ride like a sport utility vehicle. You can feel the road surface but it is far from excessive and the quiet cabin makes it easy for passengers to talk even on very rough roads. Very little road noise makes it into the cab and while the steering system dampens the roughness of the road, it doesn’t deaden the feel for the driver and there is a good amount of feedback when traveling on the rough, muddy roads.

The smaller Jeep sport utility vehicles like the 2012 Jeep Compass have been criticized for not being as truly rough and ready as the likes of the Grand Cherokee or the long-popular Jeep Wrangler but in reality, the Compass can do more than what most consumers will ever ask of their compact SUV. With fuel economy that is competitive with the rest of the class, a roomy interior with lots of cargo space and a smooth ride on and off of paved roads – the 2012 Compass is a great little SUV for the money.

Our Compass Latitude 4x4 carried a sticker price of $25,900 and it was surprisingly well equipped so for a prospective SUV buyer looking for a vehicle that offers good fuel economy figures without sacrificing power or interior space, the Jeep Compass is definitely a vehicle that should be on the short list. The Compass combines generations of trail rated SUV engineering with the great look of the Grand Cherokee – all for less than most midsized sedans.