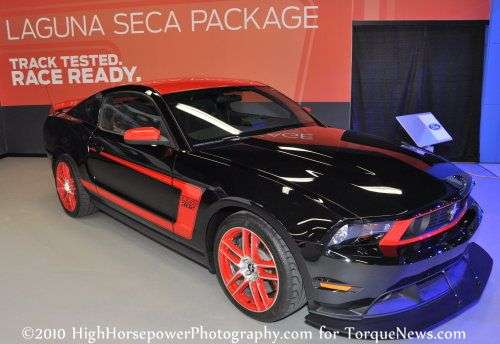 The 2012 Ford Mustang GT gets a price cut

Thanks to the folks at Edmunds, the prices are available for the 2012 Ford Mustang and while some prices have gone up, the cost of getting into an entry level Mustang GT powered by Ford’s new 5.0L V8 has dropped.
Advertisement

That’s right – the “base” model 2012 Mustang GT Coupe packing a 412hp 5.0 mated to a 6-speed manual transmission has been cut by $500, with an MSRP of just $29,145. This price (and all others in this article) does not include the destination charge which, for 2011 models, was $850 but even with the additional “because we can” charge the 2012 Mustang GT can be yours for under $30k. This means that not only is the new 5.0-powered Ford Mustang GT one of the quickest V8 muscle cars on the market but it also now the least expensive. This reduction in price comes after Dodge announced that their 2011 Challenger R/T with a 375hp 5.7L Hemi had been cut in price (putting it at the same price point as the 2011 Mustang GT) and this $500 reduction applies to both the soft and hard topped 2012 Mustang GT.

Also, as previously reported, the 2012 Mustang Boss 302 has been given an MSRP but with a very select group of Ford dealerships getting their hands on this limited edition, high performance Mustang, we cant expect to see too many Boss Mustangs leave the dealership with the new owner only shelling out the $40,145 suggested by Ford.

Regardless of how dealerships will handle the final pricing of the 2012 Mustang Boss 302, Ford Motor Company will likely continue to battle back against the Chevrolet Camaro with the bragging rights of offering the most bang for your buck with the 2012 Mustang GT.

Click here for complete pricing details from Edmunds, including options and upgrade packages for the 2012 Ford Mustang and Mustang GT.

Tsingshan's Threat to Tesla: EV Maker Is In Battery Crosshairs
Tesla-Funded Research Reveals One of The Biggest Mysteries of EV Battery
END_OF_DOCUMENT_TOKEN_TO_BE_REPLACED