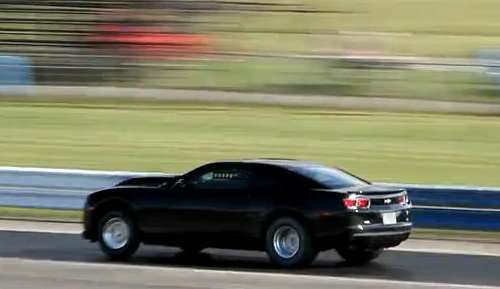 Yesterday we brought you the news that the first group of 2012 Chevrolet COPO Camaro drag cars had left the factory en route to the private owners around the country and today we have our first look at the new COPO Camaro in action – with stunning results of an 8.88 quarter mile with a trap speed of 142.9 miles per hour.
Advertisement

The 2012 Chevrolet COPO Camaro in the video below is said to be production unit #3 and this black Chevy factory built drag car is powered by the 327 cubic inch small block topped with a 4.0L supercharger. The video comes courtesy of New Era Performance – a Rochester New York based tuning company that specializes in late modern General Motors performance cars so it is fitting that these guys are the first to put the 2012 COPO Camaro into the 8 second range.

After doing a nice, smokey burnout, the 2012 COPO Camaro in the video below growls up to the beams and rips away from the starting line in a hurry – tearing down the quarter mile in a smoking fast 8.88 seconds with a trap speed of 142.09 miles per hour.

It should be noted that as COPO Camaro #3 pulls away from the burnout box, there is a white Summit Racing Equipment flag that is indicating a very strong head wind. The strong head wind could be slowing the car down a bit so provided that there was no head wind (or even a tail wind), we can expect to see quicker times. Needless to say, this makes the 2012 COPO Camaro the quickest production car ever built by GM and sold to the general public…but how does it stack up against the competition?

The 2012 Chevrolet COPO Camaro is designed to go head to head with the 2012 Ford Mustang Cobra Jet and the Mopar Dodge Challenger V10 Drag Pak.

The Challenger has been found to run in the mid to low 9 second range in stock form with its 512 cubic inch Viper engine while the 2012 Mustang Cobra Jet has turned in times ranging from the mid 9s to the mid 8s – depending on whether the car is powered by the naturally aspirated 5.0L or the more powerful blown version. With track times already in the high 8 second range, it looks as though the new COPO Camaro will have no problem competing with the cross town rivals.

While we will have to wait and see what the COPO Camaro drag cars powered by the naturally aspirated big block and the less powerful 327 supercharged (2.9L twin screw) unit run in stock form – the 327 topped by the 4.0L blower is faster than the Viper powered Challenger along with being a shade slower than the most powerful Cobra Jet
.
We can expect that the 2012 COPO Camaro drag cars powered by the 327 topped by the smaller 2.9L supercharger would be slightly slower than the 327 with the 4.0L blower. It will be interesting to see what the naturally aspirated 427 big block COPO Camaro drag cars run but with production and delivery of these new race cars well underway – it shouldn’t be long before we know exactly what all of the new COPO Camaros are capable of on the quarter mile.

It should also be pointed out that the 2012 Chevrolet COPO Camaro drag car shown in the video below was only delivered a few days ago so the driver has only had a limited amount of time to learn the new Camaro. Based on this, we could see quicker times from the COPO Camaro once the owners and drivers begin to get some quality seat time in addition to better conditions. Once that happens, the Ford Mustang Cobra Jet racers could have their hands full at the drag strip in NHRA Stock and Super Stock classes.

In the meantime, General Motors performance division can hold their heads up high as they have created one incredibly fast factory drag racing package with the 2012 COPO Camaro.