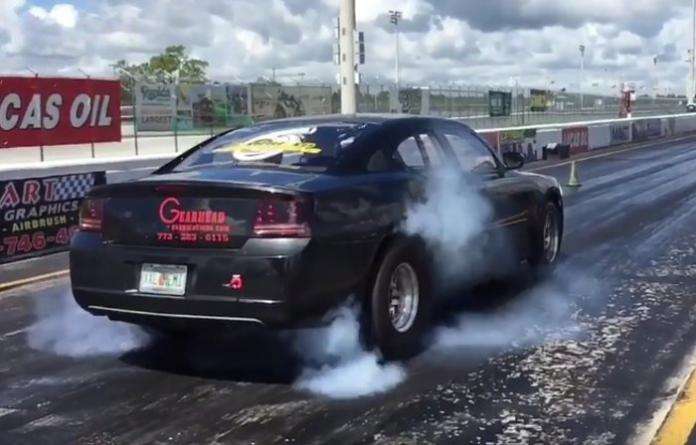 Dan Plotkin recently piloted his 2007 Dodge Charger SRT8 down the quarter mile in just 8.88 seconds, setting a new world record for the quickest quarter mile by a car running a nitrous-fed Gen3 Hemi – while also being one of the quickest modern Mopar machines in the world.
Advertisement

We talk about a great many record-setting Dodge Hellcat cars but today, we shift gears a bit, looking at the quickest modern Mopar performance car powered by a Gen3 Hemi without a supercharger or turbochargers. This car has nitrous and a fully built engine (and drivetrain), but there is no other forced induction – making this the quickest nitrous-only Gen3 Hemi car in the world.

All of that Mopar power is channeled through an ATI TH400 3-speed automatic transmission and an 8.8-inch Ford rear differential with Detroit TruTrac internals and 3.55 gears. Finally, Mickey Thompson 315/60/15 drag tires put the power to the ground.

In the video below, Dan Plotkin and his 2007 Dodge Charger SRT8 are battling Density Altitude of 2,717 (for those unsure, that is not great air for racing), but that didn’t stop him from breaking the four-year old record for the quickest modern Hemi-powered car running nitrous only.

Best of all, Plotkiin plans to take his car to ATCO for the final stop on the 2017 schedule of the Modern Street Hemi Shootout. With world-class track prep and much better density altitude, we could see that 8.88 record fall even further, allowing the 2007 Charger SRT8 to back up its record while also further securing its place among the world’s nastiest modern Mopar machines.

Crank up your speakers and enjoy this video of the nitrous Gen3 Hemi record being set by Dan Plotkin and his 2007 SRT8 Charger!