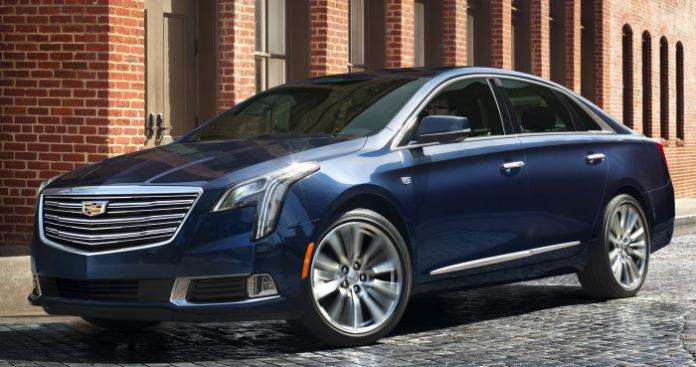 General Motors introduced the 2018 Cadillac XTS this morning and with 2 distinct exterior changes, the new XTS gets a whole lot prettier for the new model year with styling cues from the range-topping CT6.
Advertisement

Prior to the introduction of the new CT6, the Cadillac XTS was the top of the line luxury sedan from General Motors. However, when the new CT6 hit the streets, the front-drive XTS found itself overshadowed by the rear-drive CT6. Even if you put aside the advantage in driving dynamics and the incredible, luxurious cabin of the CT6, the basic exterior design of the XTS seemed a bit dated when compared to the CT6 or the popular CTS.

That all changes for 2018, as the new Cadillac XTS has the same basic form as the current models, but big changes up front and out back give this front-drive Caddy a far more modern look – bringing it up to speed with the rest of the brand’s sleek sedans.

The New Refreshed 2018 Cadillac XTS
The 2018 Cadillac XTS will be better than the 2017 model in a variety of ways, including a revised chassis, the next generation Cadillac User Experience (CUE) infotainment system and an exterior refresh. The revised chassis is promised to offer a smoother, quieter ride and the new infotainment system offers an increased level of customization capability, but the highlight of the 2018 XTS is the exterior refresh, which includes a heavily restyled front end and rear end.

The 2018 Cadillac XTS Front End
The 2018 Cadillac XTS refresh is headlined by the new face, which incorporates a new, sleeker grille design, new LED headlights with signature LED accent lighting and a front fascia with more fluid design. The new grille appears to be slightly smaller and sleeker than the 2017 XTS, with a bottom edge that curves in from the sides where the current design has hard angles leading to the bottom of the grille. The center point of that bottom grille line dips down a bit further and overall, the internal design of the 2018 XTS grille is a bit simpler than the 2017 XTS.

New for 2018, the area below the new grille has a smoother design from side to side, departing from the central channel which flows from the grille to the ground in the 2017 models. This change, combined with the larger ducts at the lower corners of the front end work with the new grille to give the 2018 XTS a sportier, cleaner look.

The 2018 XTS headlights are the biggest change for the front end redesign, with narrow LED headlights (similar to those on the CT6) replacing the larger headlight housings on the 2017 XTS. The LED trim which flows from the top of the fenders down through the fog lights has a similar look, but the change from the larger headlight assemblies to the smaller units gives the XTS more of the high tech look which modern luxury buyers demand.

In the long run, making the front-drive (also available with AWD) XTS look more like the CT6 can only be a good thing, as the CT6 is nothing short of beautiful. The license plate box has been moved from the face of the trunklid to a new spot in the middle of the “bumper” area of the rear fascia. That has allowed the engineers to give the 2018 XTS a smooth trunklid face, creating a much more refined look out back. Along with removing the higher license plate box, the design team smoothed the lines of the XTS rear end and added a set of larger LED taillights which flow in towards the middle of the car – creating what will surely be a very unique lighting effect at night.

Finally, while this could vary by trimline, the 2018 Cadillac XTS appears to have far less chrome out back than the 2017 model, with the large chrome applique from the license plate box and the thin chrome strip running between the integrated chrome exhaust tips being removed – although the chrome tips are back for 2018 with a revised shape.

In the long run, the 2018 Cadillac XTS refresh introduces styling cues from the popular new CT6, which when combined with the improved ride quality and the newest premium infotainment package will lead to an all-around better large luxury sedan for buyers who prefer the front-drive feel.