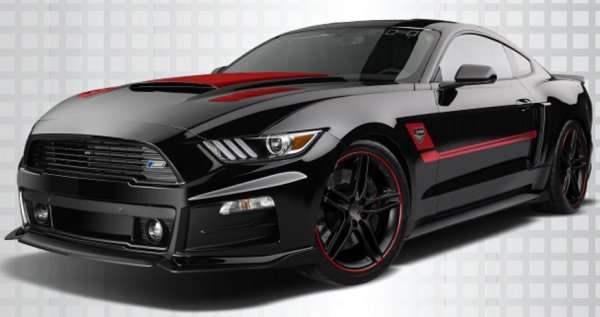 2 New Roush Ford Mustang Models for US Military Only

The folks at Roush have come up with a new pair of 2015 Ford Mustang packages designed exclusively for members of the United States military and we can expect that the new Roush Mustang Warrior models will quickly become collector’s items – but only 45 examples of the military Mustang will be offered in this first edition and they will only be offered to soldiers serving overseas.
Advertisement

In the world of high performance Ford Mustangs, few names in the aftermarket world are as respected as that of Jack Roush, as his Roush-tuned Mustangs are always among the most aggressive looking and the highest performance packages in the industry. However, the newest package from Roush brings about a whole new reason to respect the company name, as the new Roush Warrior Mustangs are designed for and only available to members of the United States military who are serving abroad.

The Roush Warrior Mustang
The 2015 Ford Mustang with the Roush Warrior package is offered in two trimlines – the Warrior T/C and the Warrior S/C. Both military Mustangs are fitted with a Roush body kit that adds a unique front fascia with a large splitter, hood, a taillight blackout panel, a new rear spoiler and new side skirts along the side. The Warrior Mustangs also come with 19 inch black painted aluminum wheels and a quad tip Roush performance exhaust system. Each Roush Warrior Mustang is available in Race Red with black trim or black with red trim, with unique stripes and badging included with both models. Essentially, the Roush Warrior Mustang looks like the current Roush Mustang family on the outside with the exception of the unique badging, giving these Mustangs a very different look from the pony cars at your local dealership.

Where the Roush Warrior T/C and S/C Mustangs differ the most is in their drivetrain offering and modifications, as the T/C is based on the Mustang EcoBoost models while the Warrior S/C is based on the V8-powered Mustang GT.

The Roush Warrior S/C Mustang begins with all of the key components of the Mustang GT, including the 5.0L Coyote V8. However, where the Warrior T/C is more of a handling upgrade package, the S/C is a comprehensive muscle car upgrade package. This begins with a TVS 2.3L supercharger that increases the output to 627 horsepower, with a Brembo 6-piston brake calipers up front helping slow the car down, unique chassis reinforcements improving handling and a Torsen rear differential improving performance in every way.

Pricing and Availability
The new Roush Warrior T/C Mustang starts at $41,000 and only 30 examples will be built for export to military members around the world. The Roush Warrior S/C Mustang starts at $57,000 and only 15 examples of the 627hp military Mustang will be offered.
Even with strict purchasing criteria and a fairly high price tag, these 45 Ford Mustang models are sure to go quick so if you are a member of the US military living abroad and you would like to drive a custom Roush Warrior Mustang – better contact Military Autosource quickly.

Christopher Nichols wrote on February 5, 2016 - 2:45am Permalink
I bought the very last one on earth at RAF Mildenhall! Stoked!