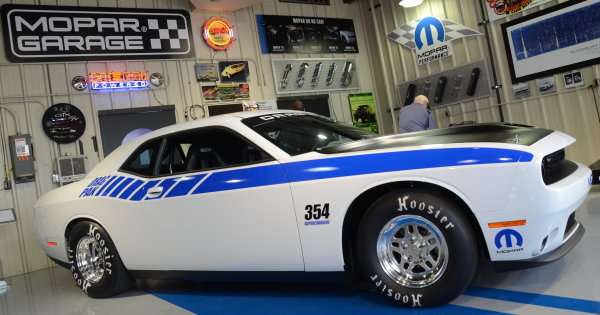 This past weekend, the Chrysler Group’s Mopar division unveiled their two newest models based on the Dodge Challenger – with the Drag Pak 354 and the Drag Pak 426 prepared to battle the quickest factory-built race cars from Ford and Chevrolet.
Advertisement

Over the past few years, Chrysler’s high performance Mopar division has offered up a special package for the Dodge Challenger that allowed Mopar fans to go super stock racing with a factory built race car, a program which the company has dubbed the Challenger Drag Pak. During that time, the Challenger Drag Pak has come with a variety of different engines, including the 512 cubic inch Viper V10 and the 392 cubic inch Hemi V8, but with the new Challenger Drag Pak, Mopar racers finally have a supercharged package to drive in the battle with the Ford Mustang Cobra Jet and the Chevrolet COPO Camaro.

2 Drag Paks for 2015
While the Dodge Challenger Drag Pak has claimed drag racing titles all over the US, only being available with a large, naturally aspirated engine has prevented Mopar racers from competing with the supercharged COPO Camaro and Cobra Jet Mustang. The Challenger Drag Pak has been a beast in its class, but the supercharged Ford and Chevy teams have thrived in the quicker classes.

Big Price for a Turnkey Race Car
If you want to buy a car that is 100% ready to go racing, with all of the safety bits needed to run in the 8 second quarter mile range, the Dodge Challenger Drag Pak can get you there without much work on your part. All you have to do is acquire the necessary racing license and write the check for the new muscle car, but that check might be the toughest part of the equation for many. The new supercharged 354 cubic inch Hemi in the Challenger Drag Pak will get it down the track in the 8 second range, but it will set you back $109,354. If you don’t mind “only” running in the 9s, the Drag Pak 426 serves as a kind of bargain option, costing just $99,426.

Expensive, yes, but not when you consider the price of the COPO Camaro, the Cobra Jet Mustang or the cost of building your own 8 second Dodge Challenger.

The Challenger Lineup is Huge
Now that the Supercharged 354 and NA 426 Challenger Drag Pak models have been introduced, the brawny Dodge muscle car comes in 12 different flavors. When the two Drag Pak models go on sale later this summer, the Challenger will be available in SXT, SXT Plus, R/T, R/T Plus, R/T Shaker, R/T Plus Shaker, R/T Scat Pack, 392 Hemi Shaker Scat Pack, SRT 392, SRT Hellcat, Drag Pak 354 and Drag Pak 426. Shy of a convertible, the Challenger has more options than the competition, with a massive spread of performance for road and track use.

Dodge continues to grow their lineup with models that buyers want and that continues to lead to improving sales figures. The new Drag Pak won’t create a spike in sales, but it will help represent the Mopar racing community in the on-track battle with the Ford Mustang and the Chevrolet Camaro.