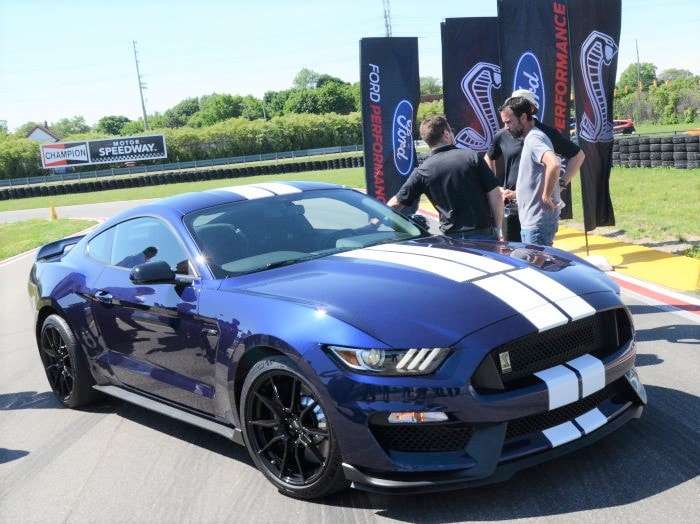 Ford Motor Company has talked a great deal about the revised Mustang GT over the course of the past two years but today, we got our first information on the 2019 Shelby GT350 – which receives a few improvements for the new model year that will make an already great track car even better.
Advertisement

The Ford Mustang was refreshed for the 2018 model year and that refresh included a new exterior look, more power for the 5.0-liter V8, new technology and an overall improvement in performance – whether you are drag racing or road racing. While the Motor Company has been talking up the 460-horsepower Mustang GT, the current Shelby has gone relative unmentioned, but that changed this morning.

This morning at the M1 Concourse road racing facility in Metro Detroit, the Motor Company introduced the 2019 Shelby GT350 Mustang to a small group of media members. We didn’t take to the track in the new GT350, but we got to see and hear the flat-plan V8-powered muscle car as it raced to its big debut.

“Somewhere, Carroll is smiling,” said Hermann Salenbauch, global director for Ford Performance vehicle programs. “The new Shelby GT350 is our ultimate track Mustang. We’ve stuck to Carroll Shelby’s original formula for winning championships and made our Shelby GT350 even better with the latest in race-proven aerodynamics, tire and chassis technology.”

Flat-Plane Power
While there have been some revisions made to the Shelby GT350 for the 2019 model year, the engine and transmission have remained unchanged. Under the hood is a 5.2-liter flat-plan V8 that delivers 526 horsepower and 429 lb-ft of torque with help from a Tremec 6-speed manual gearbox. Also, unlike the non-Shelby models, the 2019 GT350 will not wear the new front end design, with the engineers sticking with the front end from the 2015-2017 model years.
Improved Handling

The Shelby GT350 is design to carve up road courses so for the 2019 model year, the engineers focused on improving the cornering capabilities of the high performance Ford pony car. This begins with new 19-inch wheels wrapped in new Michelin Pilot Sport Cup 2 tires measuring 295/35 up front and 305/35 out back.

Next, the engineers added a new rear spoiler with an optional Gurney flap for improved rear end downforce while a new grille with blocked out areas improves aerodynamics without negatively impacting the engine cooling process.

After adjusting the aerodynamics of the car and adding the new wheels and tires, the engineers retuned the MagneRide suspension system. This includes changes to the springs and the dampers, allowing the 2019 GT350 to make the most of the new tires, the new aero bits and the 526-horsepower engine.

Tuned by a Pro
These changes for the 2019 model year were made with help from FIA World Endurance Ford GT driver Billy Johnson. Johnson is an expert on getting a car around a road course, so the Ford team tapped his experience on the track to make the fine-tuning adjustments on the 2019 GT350.

“Along with improved grip, brake and chassis refinements, Shelby GT350 brings a whole new level of performance driving,” said Billy Johnson. “It’s a rewarding car to drive on track for amateurs and pros alike, while making the driver feel like a superhero. It’s confidence inspiring in corners and begs to be pushed harder and to take corners faster.”

No Word on the GT350R
While the Motor Company rolled out the 2019 Mustang Shelby GT350 today, there was no word on the GT350R. The press release and the program at which the new GT350 was introduced referenced the upcoming and long-awaited GT500, but there is still no word on the future of the GT350R. Considering the fact that the GT350R already has unique wheels, aero bits and suspension tuning, the automaker might let the race-ready version continue on unchanged while improving the stronger-selling pony car shown above.

Tesla Contemplates A New Strategy for China Retail even As Sales Boom
Jay Leno on Elon Musk & EVs: “I Think He Should Get ... Credit"
END_OF_DOCUMENT_TOKEN_TO_BE_REPLACED