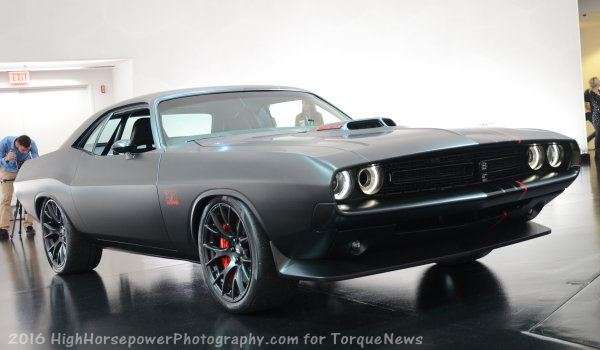 The 1971 Challenger Shakedown is One Awesome Pro Touring Restomod

There are a few vehicles on display from FCA at the 2016 SEMA Show which might lead to a production model or new aftermarket accessories from the Mopar division, but the 1971 Dodge Challenger Shakedown is not one of them. Instead, the Shakedown is a true SEMA show car, with modern attributes added to a classic muscle car, creating the type of restomod muscle car which has become so popular in the aftermarket world.

Under that Shaker hood is the modern 392 cubic inch Hemi V8, sending 485 horsepower and 475lb-ft of torque to the rear wheels via a 6-speed manual transmission and a heavy duty rear differential. Next, the Mopar team added a modern high performance suspension system with Fox dampers, but to achieve the ride quality and the handling that they wanted from this beast, they scrapped the traditional unibody construction for a one-off body-on-frame chassis design. This allowed Mopar to get the Challenger Shakedown tucked tightly against the ground without compromising handling or a comfortable ride.

Next, over the huge Hellcat-spec Brembo brakes is a set of Hellcat Slingshot-style wheels measuring 19 inches up front and 20 inches out back, all of which are wrapped in high performance rubber. When combined with the slammed suspension, the matte black paint with gloss black/red stripes and the 2015-2017 Challenger components including the headlights, grille and taillights, the Challenger Shakedown is one beautiful restomodded Mopar muscle car. This car will blast down the quarter mile, rock around the road course and comfortably cruise down the road as well as any muscle car out there.

Finally, to add that extra bit of “SEMA wow factor”, Mopar removed the back seat and replaced it with a carbon fiber delete panel as well as adding a modern-style dashboard with the new Challenger steering wheel. There is also a spread of carbon fiber trim pieces, including portions of the Viper bucket seats.

The 1971 Dodge Challenger Shakedown doesn’t forecast a future production model, but it shows how to make a classic muscle car even more impressive with modern automotive technology. Also, based on how great the 2015+ Challenger headlights and taillights fit the 1971 Challenger, I wonder if we won't see more classic Mopar muscle cars with the modern LED lights. In the meantime, we have this great show car to enjoy.

Panasonic Updates Profit Forecast, Noting How Much Tesla Batteries Help The Jump
2022 Porsche 911 GT3 Laps Nurburgring in 7:04 With Journalist Behind The Wheel
END_OF_DOCUMENT_TOKEN_TO_BE_REPLACED