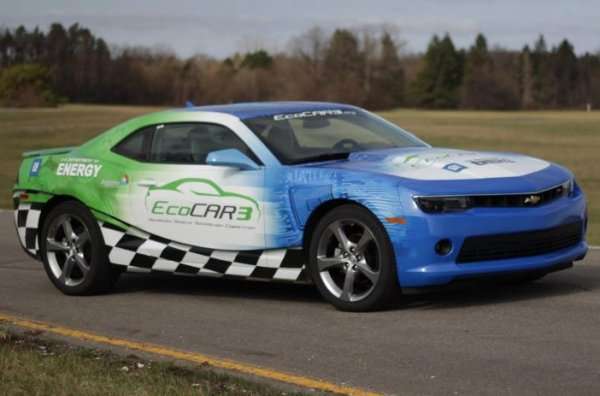 The US Department of Energy and General Motors have teamed up with 16 universities around the country to make the Chevrolet Camaro more eco friendly as part of the EcoCar3 Advanced Vehicle Technology Competition.
Advertisement

EcoCar3 is as competition held by the US Department of Energy and General Motors which has 16 well known universities from around the United States working to make the 2014 Chevrolet Camaro more eco friendly. This competition will span the next four years as these college students work to come up with innovative new technologies that will allow the Chevrolet Camaro to use less energy, reduce tailpipe emissions and reduce greenhouse gas levels – but the schools need to make the Camaro more eco friendly without hurting the performance too severely. Also, the schools have to keep the Camaro looking relatively unaltered so while they can do things to improve aerodynamics or reduce weight, they have to do so while preserving the styling exterior design of the Camaro.

“The EcoCar programs have been and will continue to be an instrumental part of developing the next generation of automotive engineers. We have gained significant talent and intellectual property as a result of these programs,” said GM Global Chief Engineer and EcoCar program manager James Kolhoff, “We’re also eager to see how the students will redesign and add more efficiency to an iconic ‘muscle car’ like the Chevrolet Camaro.”

In addition to having a team of engineers who will work to improve the Chevrolet Camaro in as many ways as possible, each school will have to include students who will focus on the communications process, marketing and basic project management. In other words, the EcoCar3 program will give each of these 16 universities a Chevrolet Camaro and those schools will have to go through many of the same steps that an automaker goes through to design and market a car – but instead of designing and marketing a brand new car, these college students will work to turn the Camaro green and market it as a greener performance car.

While this program could bring about cutting edge technologies that could quickly be integrated into production vehicles including (but not limited to) the Chevrolet Camaro, EcoCar3 also gives students at those 16 universities a chance to experience many of the same processes that take place in launching a new production vehicle. This will allow those students who want to go into the industry to gain valuable experience…while also maybe making an American performance car more eco friendly in a way that could be used on a production model in the future.