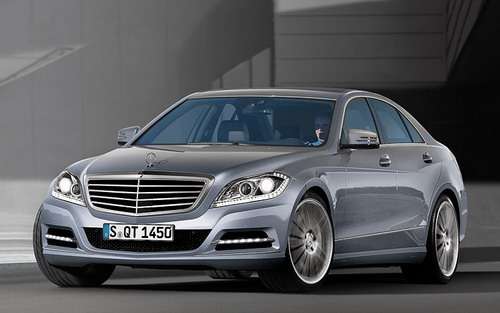 Set to arrive by the end of 2012, the new generation of Stuttgart flagship Mercedes-Benz S-Class 2013 will represent a major shift in the automotive industry. Described as world's best luxury limousine, the car will certainly live up to the highest expectations.
Advertisement

The prestigious history of the Mercedes-Benz S-Class dates back to the early 1950s, when the W 187 series 220 sedan emerged on the market. Up to present days, the premium limousine has covered nine generations, a record that is very hard to beat even judged by today's standards. The S-Class has been always perceived as the ultimate leader and not just another follower of the trend. Several, major safety features that are to be found in almost any new car were premiered long time ago in this iconic Mercedes.

Take, for example, the pretensioned seat belts, the patented safety cell (a work of art by the gifted engineer Bela Barenyi), the ABS fitted premierly on the W 116 series, the front and passenger airbags featured by the W 126 series, the ESP on the W 140 series of 1996 or the first system that is able to detect the imminency of an accident and take the needed measures to minimize the effects or to even avoid the crash - the PRE-SAFE which debuted on the W 220 series. The W 221 generation, which approaches the end of its career, has led the automotive intelligence one step ahead of the competition by incorporating an array of top-of-the-line technologies: the user-friendly COMAND infotainment system, the Night View Assist using infrared rays, the enhanced PRE-SAFE, the Active Blind Spot Assist, Lane Keeping Assist or Speed Limit Assist - and the list could continue.

Towards the end of next year, Mercedes-Benz will take the wraps off the new generation S-Class, that is currently undergoing the rigorous testing and development programme. To attract new clients into purchasing the model, no less than four body styles will be available in less than three years: the SWB (standard wheelbase) at the start of sales, the LWB (long wheelbase) following in 2013, the new S-Class Coupe replacing the CL-Class in 2013 as well and an exquisite four-seater Mercedes S-Class Cabriolet version in 2014, to take up on the illustrious Ocean Drive Concept 4-door cabrio concept car premiered in 2006.

The technical platform will consist of the entirely new mastered Mercedes Rearwheel Architecture (MRA), expected to be the most flexible chassis in the world, as it will allow further powering solutions to be implemented without changing the basis underpinnings due to the modular structure. The pneumatic AIRMATIC suspension system will also be rehauled to deliver outstanding comfort, and the Active Body Control (ABC) will gather more functions to improve the general behaviour. A radar-based MAGIC RIDE CONTROL system, inspired by the F 700 Research Vehicle, is also part of the equipment list. The magic stuff continues as the future S-Class will boast MAGIC LIGHT CONTROL, meaning full LED headlamps and adaptive free-flow light patterns varying with speed, weather and steering angle. The current COMAND infotainment system will be replaced by the Servo-HMI interface, which packs a bigger LCD screen, fewer controls and sensors that can read the driver's hand movements and revert them into actioning certain commands. The extended-memory hard disk for storing your media files and maps for the navigation facility goes without saying.

The powerplant choice will comprise fuel-efficient 4I, V6 and V8 units: a 2.1 litres 204 hp engine for the S 250, a 3.5 litres V6 available in two power options - 306 hp and 354 hp for the S 350, a 4.7 litres V8 with 435 hp (or probably more) for the S 500. Even though there were hints Mercedes-Benz will axe the high-end S 600 version, it now appears that the engineers are developing a new V12 unit, that shall be of at least 550 hp. Hybrid variants are also expected, the most certain one being the S 500 PLUG-IN HYBRID featuring a 306 hp V6 internal combustion engine and an 109 hp electric motor. Moreover, company officials don't rule out an all-electric Mercedes S-Class. As for the AMG sports limousine, the S 63 is prone to pack the 5.5 litres TT V8 producing 571 hp and 900 Nm, while it is not clear whether the S 65 range-topping version will be put to sleep or not.

Mercedes-Benz M... wrote on May 13, 2011 - 9:20am Permalink
I can't wait for the 2012 , the next mercedes-benz generation must be fullfilled my life needs.
Doug Ward wrote on May 14, 2011 - 7:32pm Permalink
As a full time Realtor I am looking forward to getting a new 2012 S Class to be able to wiz my clients around town from house to house in the style that they deserve! Doug Ward Regency Real Estate Orange County, California
Mercedes-Benz M... wrote on May 22, 2011 - 2:39pm Permalink
i cant wait too for mercedes-benz S class
chevy chase wrote on August 26, 2011 - 2:58am Permalink
mercedes benz S class is really superb class.I liked it very much and obviously there must be expectation that this will be the world's best luxury car .I am eager to check it out on the street at 2012 as I knew it will rocks the street.thanks for the information shared at yours site.
johnmathews25 wrote on August 29, 2011 - 3:46am Permalink
Mercedes Benz S Class is flagship model of Mercedes that has been launched with innovative technologies along with enhanced comfort, safety and environmental compatibility. It has increased the safety standards as it is equipped with numerous sensors, driving assistance and intelligent electronic systems. Mercedes Benz S Class is a sophisticated car which ensures safety, comfort and effortless superiority. Mercedes-Benz S-Class Price: Rs 81,79,655* - Rs 97,52,873*
Anonymous111 wrote on August 31, 2011 - 8:25am Permalink
I absolutely liked the way you have designed your blog, it's simple, neat, simple to navigate and incredibly easy on the eyes. Can you tell me which theme or designer did you use. <a href="http://www.biogetica.com/cure-hepatitis.php">hepatitis c remedy</a>
Anonymous wrote on September 7, 2011 - 1:39am Permalink
Mercedes, when you update the S class, PLEASE move the shifter down the to center console and away from the steering column. You can also dress up the interior a bit. On the outside, the current S class is the best looking car over BMW, Audi & Lexus, but you have the worst interior. Its just bland.
drew bitsko wrote on September 26, 2011 - 7:28am Permalink
Mercedes is my favourite car.. I have used it...Compared to my mercedes benz this provide comfort and security options regarding accidents though it has very powerful speed... <a rel="follow" href="http://www.natural-mole-removal.com/howitworks.htm" rel="nofollow">mole removal at home</a>