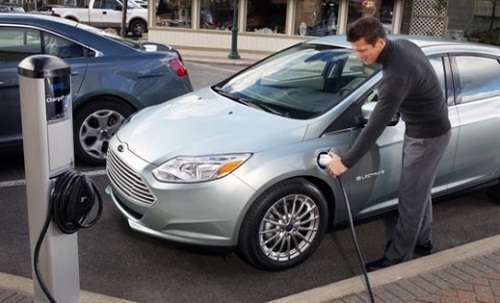 What is common between Ford Focus Electric and plastic bottles

Ford took advantage of the past CES and NAIAS shows to present it's Focus electric car, which is expected to be sold at the end of the 2012 in the United States and has something common with 2 million plastic bottles. An explanation in Ford's recent release reveals how many clean car units the company may sell in the foreseeable future.
Advertisement

Going further on its commitment to sustainable mobility, the automaker also announced that with Repreve it will recycle two million used plastic bottles and use them in producing the 2012 Ford Focus Electric. Ford will use a maximum amount of recycled materials in producing its flagship EV, but the usage of plastic bottles is what notoriously stands out.

Repreve is yarn, made from recycled materials. According to the company (Repreve.com), its one of the most earth-friendly fabric ingredients in the world. It makes the fabric from extensive family of recycled fibers and offers a sustainable options to various industries.

Ford is smartly taking advantage of these options and has said it will use Repreve to make seats for the 2012 Electric Focus.

To even further increase the buzz around this innovative approach, Ford said it will start to recycle plastic bottles used at CES and NAIAS. This was a smart move that showed the consumer how close the company can come to the social awareness for the need to recycle and preserve the environment while meeting our driving needs.

It will take about 22 recycled plastic bottles for the "seating in each vehicle interior," said Ford in a release. In the same please, the company also said it will use 2 million plastic bottles "in new vehicles beginning with the 2012 Focus Electric." Thus, the automaker is talking about 91,000 cars, where it plans to use yarn from recycled materials.

There was a time when our society cared less about the environment. At that time Wayne's Michigan Truck Plant was a recognized assembly plant where Ford Expedition and Lincoln Navigator cars were being made. Today that is changing.

Ford is to invest hundreds of millions, giving the plant technology that will enable it to produce the very environmentally friendly 2012 Ford Focus. The Focus went into production a year ago and is now being followed by its electric version on the same assembly line as its petrol version.

The top speed of the Focus EV is 84 mph. The company expects the owner to charge the car's batter at home on a daily basis. A full recharge of the 2012 Ford Focus EV is expected to lower the electricity bill and take between 3 to 4 hours, which is half the charge time of the Nissan Leaf, ford wrote in a release.