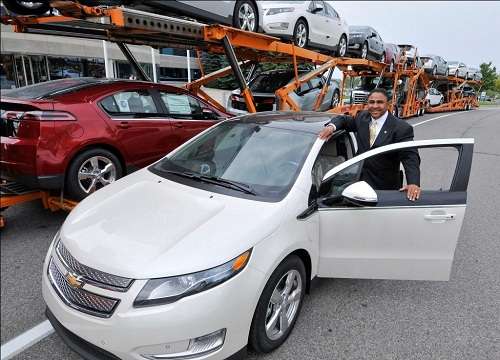 Today is a special day for Canadian Chevy dealerships as the much heralded electric Volt is shipped to dealerships and will be available for sale with a special MSRP price.
Advertisement

Doug Wernert, Chevrolet VoltAge Community Manager, informed the readers today that the first batch of Volts were shipped to Canadian Chevy dealerships this morning from Oshawa. Located in Ontario, the city of Oshawa is home to one of the largest car manufacturing facilities in the world called Oshawa Car Assembly. It builds various cars for GM Canada.

According to Volt's website, the starting price of the 2011 Chevy Volt is $32,780. However, this is the price after tax savings. The MSRP for the US buyer is 40,280 USD. If a buyer qualifies for the full $7,500 tax credit it will already come down, equaling what the Canadians are asked to pay.

Reading comments on Chevrolet Volt's Facebook page it is certain that both U.S. and Canadian fans are anxious to see Volt arriving in their cities. "The city of Raleigh NC is ready. Lots of charging stations and dedicated parking spots in town. i dont know about the apartment complexes," writes Paul Vasquez-Negron from NC. "Canada doesn't get the short end of the stick for once," writes Joshua R. T. Anderson, getting a concerting comment from Kelly Breard that its "about time for Canada." She says she ordered her Volt in the spring and it wont be delivered until November.

Armen Hareyan wrote on September 1, 2011 - 4:42pm Permalink
Doug just updated the announcement with a new followup as to how many Chevy Volts are shipped. "As a follow-up to our earlier post, more than 60 Chevrolet Volts were shipped out this morning from Oshawa, so for Canadian fans, no need to wait for other electric vehicles that won’t be delivered for some time. Customers in some provinces can expect it to arrive soon and within twelve months, the Volt will be available nationwide in Canada." - Doug