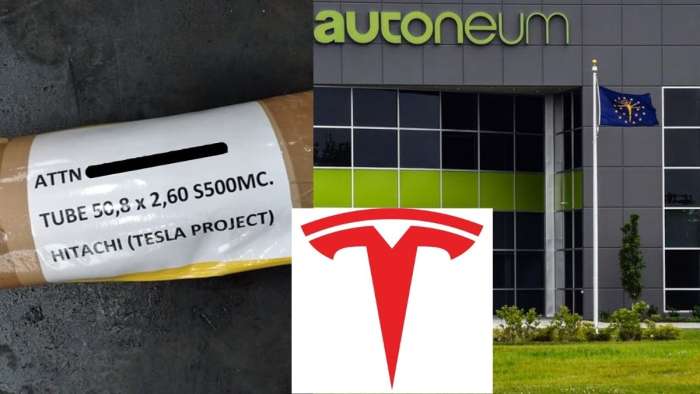 Tesla already signs supplier contracts for Giga Berlin as construction nears to its conclusion and Tesla gets ready to build the first prototype Model Y electric crossover sometimes in May and mass production in July -August time-frame.
Advertisement

There were two big developments about Tesla Giga Berlin yesterday. We are talking about two supplier contracts that will supply parts to Giga Berlin from Switzeland and the Czech republic.

The first one is Hitachi Czech. Elektrickevozy, a Czech automotive website, reports that a Czech Republic based supplier Hitach, has already started producing parts for Tesla vehicles that will be manufactured in Giga Berlin. The second one is the Swiss supplier Autoneum which makes acoustic and thermal insulation parts for vehicles. Tesla is not losing time, already aligning all ducks into the row to make sure production will ramp up immediately once the Giga Berlin’s factory construction is completed.

According to Elektrickevozy, Tesla will get shock absorbers from a Czeck-based company Hitachi that already manufactures them and specializes in shock absorber manufacturing near Zatek.

It was originally speculated that the European Gigafactory 4 could be built in the Czech Republic due to its location in the heart of Europe or due to lithium deposits in the Ore Mountains. For various reasons, whether the Czech Republic’s approach to electromobility or prestige, Tesla, after years of thinking, chose neighboring Germany.

So now, Tesla electric cars manufactured at Giga Berlin will eventually have at least a partial origin from the Czech Republic. From the trusted source, who did not wish to be named, the editorial staff of Elektrickevozy.cz exclusively learned that automotive parts are already being produced in the Czech Republic, which will then travel to the German Gigafactory.

The production of electric cars at Gigafactory near Berlin is scheduled to start sometime in the spring of this year. I mean the prototype Model Y. However, Tesla is already signing contracts with companies in Switzerland and apparently, these supplier companies are already responsible for the orders, from which Tesla will build its cars: particularly the Model Y. In this particular case Tesla’s shock absorber’s material comes from Spain to the Czech Republic in the form of tubes, which will be shock absorbers for cars, manufactured by Hitachi Automotive Systems Czech with a factory near Žatec.

We did not learn the details, whether it is, for example, just a number of pieces for the prototypes or whether it is a long-term order. In any case it is still very interesting information that will at least please fans of the Tesla brand or general fans and owners of electric cars, what do you say?

Regarding the second supplier contract: Swiss car parts supplier Autoneum has received an important order from Tesla, which will soon begin car production at its European factory, Giga Berlin. The Californian manufacturer is expected to become one of the company's most important customers in the future.

Eva Fox reports from the Tesmanian that on March 3, at a virtual press conference, Autoneum CEO Matthias Holzammer proudly announced that his company is now a Tesla supplier: "Today Tesla is one of our customers." Though at the moment, the details of the order have not been disclosed.

Autoneum is an internationally active Swiss automotive supplier headquartered in Winterthur, Switzerland. The company is one of the leading manufacturers in vehicle acoustic and thermal insulation for vehicles, and supplies the majority of global automobile manufacturers. Autoneum's clients include such automakers as Ford, BMW, Honda, Toyota, GM, Volvo, Renault, Mercedes, and others.

Please note that until now, Tesla had not cooperated with the Swiss company, and a new contract appeared only after the Californian company approached the final stage of construction at its Giga Berlin. Autoneum has not disclosed what parts it will supply to Tesla. However, according to what was disclosed, sales to Tesla will be so high that the Californian manufacturer will be on the list of the most important customers in the future, Holzammer said.

The Tesmanian also points out that the Tesla partnership will be very important for Autoneum. “Even if sales [of parts] will be small at the start, I think in the medium term it is a strategically important step to enter the door of the world's largest EV manufacturer,” said Yves Becker, industry commentator at Zürcher Kantonalbank.