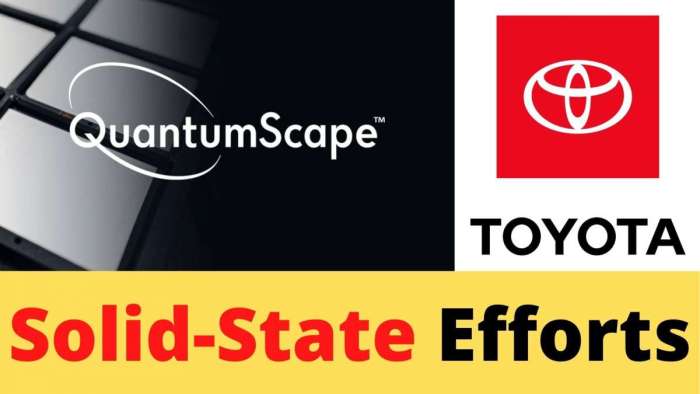 Toyota is quietly working on solid-state batteries. But recently QuantumScape announced a little R&D victory in its own solid-state battery efforts. Yet, both companies still have many hurdles to overcome in longevity and scaling up to mass production.
Advertisement

It's been a long time since we last heard about Toyota's solid-state battery efforts. Simply speaking, there hasn't been any update, except this about two weeks ago. “Next-generation batteries, such as solid-state and metal-air batteries, are safer and demonstrate higher performance than lithium-ion batteries,” said Ed Hellwig, Toyota Motor North America safety and quality communications manager.

As Crimson Decade noted in my yesterday's Toyota/QuantumScape solid-state battery report at Torque News Youtube channel (please subscribe for daily EV news), "Toyota is leak-less on all things. We can't even get info on a Tundra for the past year. Toyota won't release anything until it is in production."

Yet, Toyota has been working on solid-state battery tech since 2012 and the company hasn't showed the public anything with regards to the output of their research & development yet. Toyota's prototype EV with a solid-state battery is expected to come this year in 2021.

But things are different when it comes to QuantumScape. It recently reached a major breakthrough with its solid-state battery effort achieving "automotive performance" in a single-layer cell in 2020. Now the company says it has achieved the next step toward overcoming this hurdle, having made a multiplayer cell that can cycle 800 times.

Dean McManis, who regularly reports Tesla and EV stories at Torque News, comments on the situation and says the following.

QuantumScape is heavily backed by VW and Bill Gates, but they still have many hurdles to overcome in longevity and scaling up to mass production. Their recent R&D victory was to be able to their batteries to charge and discharge without extreme temperatures, as they claim their rivals require. And they also stated as a breakthrough that they were able to have 800 charge cycles with only 80% degradation, and that compares to Tesla/Panasonic's 2170 batteries which offer 1000-1200 cycles until degradation to 80% maximum charge. But in contrast, the 4680 batteries were supposed to last 15,000 charge cycles until reaching 90% capacity. Which is another level of longevity and reliability. Still, QuantumScape's solid state batteries claim to fame is the ability of getting an 80% charge in only 15 minutes. And there are several use cases where this would provide great value. Like people who cannot charge at home, and who rely on public charging. The relative cost and mass production hurdles are the next ones that really need to be addressed before labeling this technology as a "Tesla killer."

As a conclusion, I kind of agree with Aeron Gerich, who commented under Torque News Youtube Channel writes, "it's hard to say anything final for now since there hasn’t been any official news regarding solid-state batteries. Probably battery researchers haven’t cracked the code just yet. If they do, for sure there will be major announcements in the automotive and tech industry."

What about you? Do you think QuantumScape or Toyota may have already cracked the solid-state battery code?

Steve C# wrote on February 24, 2021 - 5:40pm Permalink
Toyota always keeps their info close to the vest. From what I have heard they have over 1000 patents covering battery technology. While QuantumScape has over 200 patents. Also, QuantumScape is being sued by stockholders. So who do I trust? Sounds pretty obvious.
Al D wrote on February 25, 2021 - 7:30am Permalink
With over 1000 solid-state related patents, my money is on Toyota to be first to market with a solid-state battery in a reasonably-priced production vehicle. I'm guessing these batteries will be expensive and difficult to mass-produce for several years and will likely end up in PHEV's and high-end BEV's at first. With a limited battery supply of an expensive battery, it makes more sense to put 80 kWh worth of battery power into four PHEV's and increase the premium by $3,000 each than to put an 80 kWh battery in one BEV and increase its premium by $10,000. People will pay an extra $3,000 for a solid-state PHEV that does everything better than its predecessor, but will they pay a $10,000 premium for a solid-state BEV?
martino SANTORO wrote on April 6, 2021 - 1:22pm Permalink
su quali azioni della batteria solido-stato della Toyota bisogna investire?