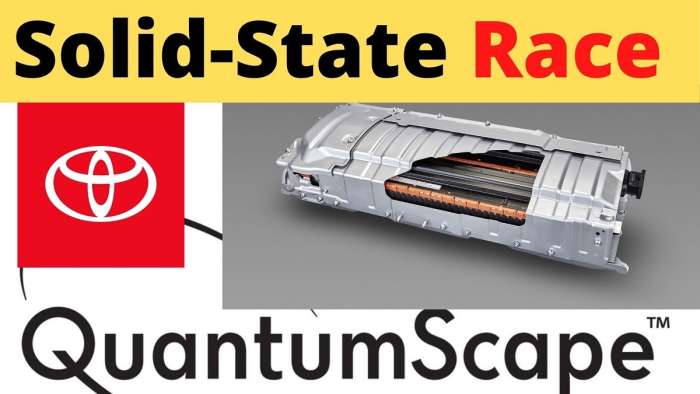 All News About Toyota QuantumScape Solid-State Batteries Is Academic

A few days ago when QuantumScape said they believe they are the only player to have shown a solid-state lithium building-block capable of meeting electric vehicles' key requirements, the EV community at Torque News responded with variety of opinions bringing Toyota and Tesla into the equation.
Advertisement

Here are some of the most interesting comments and opinions about QuantumScape, Toyota and Tesla solid-state battery efforts. For the background, in December 2020 we learned that Toyota's new game-changing EV battery and a prototype are coming in 2021.

Aeron Gerich Co
I believe Toyota is ahead of the game. But I’m waiting on when solid-state batteries will be mass produced so I can test one myself.

Dean McManis, who regularly guest posts Tesla stories at TorqueNews.com, writes “This is a QuantumScape investor report. So they are obviously going to say that nobody else is close to their technology. Toyota is only showing a prototype solid state battery this year, so they don't need to prove that it's scalable, cost effective, or even realistic to use in mass production vehicles. All of the news about solid state batteries is academic until someone actually starts mass production in vehicles. Only then can we realistically compare the actual price/performance capabilities to conventional batteries.”

Now, if QuantumScape is “actually answering those questions that it's scalable, cost effective, or even realistic for mass production. Then wouldn't that make them ahead by default?” “Only theoretically,” replies Dean. He writes, “When they actually build them, scale production, and the capabilities and costs are as anticipated, then we can revisit the comparison against other batteries.”

Tero Piispala
I agree that QuantumScape has a lead in solid state batteries. There is no indication that Toyota could have made breakthrough in solid-state battery. I have written about this in many other comments. Toyota's battery is presented for marketing reasons and the promises they make give hint on the impracticality of the design they publish. Timeline to get anything in high volume will probably close to end of this decade. QuantumScape battery is also far from finished but they can actually have something in next five years

Jeff Gilleran1
Until I see a functioning "pack" I will reserve judgement and wait for results. The proof is a completed pack that works. Until then its just talk.

Denis Tantas
Toyota doesn’t do any public statement about anything before it has it on sale. They don’t beg for attention. The statements are from Nikkei. But when Toyota unveils it, I will just tell you: “I told you so.”

Denis Tantas says, “I am looking forward to shift to electric vehicles and I will shift only when there is a solid state battery one on the market. So, I believe the first one to come, will accelerate others in the process too. That keeps me motivated to hope.”

To this comment, Dean McManis replied writing, “The question is by the time that solid state batteries do make it into mass production, how will they compare to other battery technologies, which have also evolved in the meantime? Competition breeds innovation, so we as consumers benefit either way. By all means, keep rooting for your favorite technology to leap ahead! I will celebrate right there with you if/when it happens!”

Where does Tesla come in the equation of solid-state battery?

Myron P
I am sure Tesla has looked at their technology and passed on it for a reason Tesla could easily bought them out or license the technology. Toyota is taking an uphill road to develop and might be years away before they can put such batteries in vehicles.

In fact, Torque News' Toyota reporter Peter Neilson thinks Toyota will crash Toyota's solid-state battery will crash Tesla. However, I think that an EV battery is an issue for Toyota, but not for Tesla (at least for now).

Ron Sexton
The big question, to me, is what about Tesla after they bought Maxwell? What do they have to say about solid state batteries?

To this question Dean McManis replies and writes, “You will note that Tesla was silent about its "million mile" batteries at its Battery Day last year. I think that is because they don't need to talk about super long battery life when their 4680 batteries are already ahead of competitors batteries, and Tesla is beginning to scale up to mass production this year in their upcoming battery factories in Giga Nevada, Giga Texas, and Giga Berlin. Solid state batteries, like graphene batteries, show off very cool technologies. But until they can scale up to mass production at a competitive price, they are not important to mention as real competition.”

Ron replied and said, Dean, “Some of Tesla's current batteries are already million mile batteries. More than most will ever use. And the newer ones are even better. So yes, it's kind of a non issue. Range matters more to people, or at least to me.”

The interesting this is that apparently Mercedes-Benz already has electric buses that run on solid-state batteries. I am hoping that in the near future I will have a coverage on the subject at Torque News Youtube channel. Please subscribe and follow me for daily EV news.

Andrew Poisson wrote on February 23, 2021 - 8:29pm Permalink
Solid state batteries for buses and delivery vehicles operate at temperatures. This means that they must be plugged in or running. I believe there are a number of companies in this market. Research is being done to make a solid state battery that operates at “room” temperature ranges so they won’t need to be plugged in while not running. . Solid Power might be closer than anyone but they are privately held so information is scarce.. Ford has their fingers in a lot of pies and it wouldn’t surprise me if they pulled a solid state battery out of one of them.
Armen Hareyan wrote on February 23, 2021 - 9:53pm Permalink
Thanks for the comment Andrew. I am looking forward for the breakthrough of the solid-state batteries in our electric vehicles.
John Lando wrote on February 23, 2021 - 10:04pm Permalink
Nano One has a great cathode for Solid State that has no cobalt and doesn't pinch and swell like other materials. $nnomf
Armen Hareyan wrote on February 23, 2021 - 11:12pm Permalink
Thanks John, I may report on Nano One's new success tomorrow in our Youtube Channel and perhaps here as an article too.
Dufus the Dude wrote on February 24, 2021 - 9:19am Permalink
Why are all these guys talking about scaling? Simple fact is when any one of these companies put their solid state battery in an EV and it runs in the real world they are the leader. Toyota has been talking about batteries like its not going to be mainstream and has been negative against it vs hydrogen but they are the ones with leading SS battery tech? Seems hard to believe. Put a battery in a car and drive it charge it in all conditions and there's your winner. Scaling a factory is the easy part.
David radzieta wrote on February 24, 2021 - 10:18pm Permalink
Nissan Leafs are currently the only manufacturers using a million mile battery in America. This is the NMC532 formula. If Teslas batteries were actually any good they wouldn't be searching for a new battery and spreading FUD about cobalt. Hopefully the Chinese LFP batteries will catch Tesla up to other manufacturers in both safety and longevity.
Dufus wrote on February 25, 2021 - 1:51pm Permalink
How is Nissan using million mile batteries when after 5 years they need replacing due to decreased range? Also Tesla is always looking to improve they don't just stop r&d because they have a battery. They aren't spreading fud they are trying to eliminate a rare earth metal from their batteries. It's called improvement. These nothing in your comment that is actually factual just assumptions and suppositions and a lie that Nissan batteries have a million mile life. Maybe they do but after 5years the range can get you 20 miles range from the original 150.