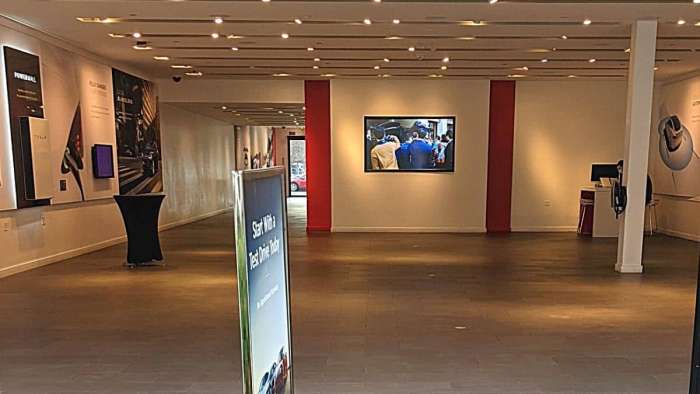 Tesla's end of the year push is going so well that, as this picture shows from the Stanford Mall, even the showroom cars are all sold out, leaving Tesla showroom empty.
Advertisement

Tesla’s end of the year push to sell more cars and close the year 2020 with a record 500,000 vehicle deliveries is apparently paying off. A Twitter user with a handle @OrbitHigher has yesterday shared an image from the Stanford Mall in California, showing an empty Tesla showroom. He writes, “At Stanford mall, and even the showroom cars are all sold out. Amazing demand Tesla, Congratulations Elon Musk.”

At Stanford mall and even the showroom cars are all sold out!!

Apparently, this picture is from the Mall in Stanford, found at 660 Stanford Shopping Center, Palo Alto, CA 94304 (per Google search).

One needs to explain images like this, because if you don’t say anything, people, who are unfamiliar with it, may look at the picture and conclude Tesla is closing another shop. Yet, the Tesla vehicles in this showroom are all sold out and the showroom is empty.

Tesla aims to sell a record number of cars in this last quarter and make 2020 a record year. If everything goes the way it hoped for, Tesla will sell more than 500,000 electric vehicles in 2020. “In 2019, we delivered approximately 367,500 vehicles, 50% more than the previous year, and in line with our full-year guidance. We continue to focus on expanding production in both the US as well as our newly launched facility in Shanghai,” Tesla reported in its Q4 Vehicle Production and Deliveries Report on January 3, 2020.

January 4th of 2021 is the first Monday of the new year. I expect on January 4th either before markets open or after the markets close Tesla will report its Q4 2020 numbers and we will learn how Tesla performed in 2020 in general.

Coming back to the sold-out Tesla vehicles in this location, one observer said, “keep in mind this is the location least likely they would need to take showroom cars from as it’s only 20 mins from the factory,” giving more credibility to the thought that Tesla’s end of the year push is going very successfully.

Another Twitter user, named Isaac Laterell from across the country from VA, commented and wrote "Tesla Tyson’s Corner VA - also no car." But another commenter from Richmond, VA, wrote “Richmond, VA lot is filled with Cars. Hope it empties out this week.”

After several comments, the original poster @OrbitHigher wrote back, saying “I inquired with the people in the showroom, they said all sold out and they are only around to take reservations.”

Tesla is making some serious efforts of its end of the year push. On December 1st, Torque News learned that Tesla has contacted possible buyers with a cutoff date to ensure End-of-Year delivery.

A text message to one prospective Model 3 buyer from a sales advisor said: “Hello. Happy Holidays. Hope all is well. [redacted] from Tesla here. I wanted to connect to see if you were ready to move forward with a Model 3 order prior to our cutoff date of December 8. If you are still interested in taking delivery before the end of the year, feel free to reach out at your earliest convenience to [redacted]@tesla.com," reports Joey Klender of Teslarati.

On December 14, we learned that Tesla offers one year of free Model 3 and Model Y Supercharging to end 2020. This is a trick Tesla has used in the 2019, aiming to boost then-slumping Model S and Model X sales.

"Reports say Tesla's sales staff in North American has been told to offer one free year of Supercharging for "undelivered" Model 3 and Model Y vehicles. The promotion runs from December 12 to 31. Model 3 Standard Range vehicles are excluded," writes Steven Loveday at InsideEVs.

With all these positive developments, it's no wonder Consumer Report named Tesla Model 3 and Tesla Model S the best American cars in their respective categories, according to its Best American Cars, SUVs, and Trucks list. Consumer Reports recently compiled a list of America's best cars, ranking Tesla in the top two spots. Consumer Report, in order to compile the overall score, takes into account factors, such as individual road-test scores, reliability, owner satisfaction, and safety.