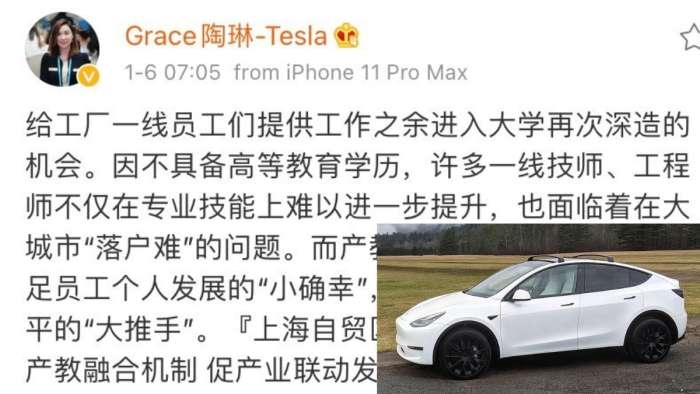 This is already second time in the past seven days that Tesla China's VP Grace Tao responds to a recent article by Ping West and defends how Tesla is committed to its front line technicians, engineers and their college education.
Advertisement

Tesla's VP Grace Tao says "Tesla is committed to providing opportunities for front-line technicians and engineers with or without college degree to further college education and skills as part of career development and help some secure LT residence permits. This shows how Tesla Chin cares about its employees, quotes her Tesla Investor @Ray4Tesla on Twitter.

The LT residence permit, as explained by Ray, is a long-term residence permit, which allows one to buy house, car and send kids to local school and join social pension program and other benefits in China. Imagine that there may be a lot of technicians and engineers working at Tesla Giga Shanghai, who are not from Shanghai, but have come to Shanghai area from other provinces of China. It’s normally called settlement program.

If you are a Tesla investor or an EV enthusiast, you may remember that earlier there was a Chinese article claiming Giga Shanghai is a sweatshop ruled by overlords, and that workers are mistreated, causing some Tesla fans here on Twitter to be concerned. "Believe what you believe and never be swayed by those outrageous click-bait titles," comments Ray under his tweet.

This is a big development move from Tesla China since in Asia, not having that piece of paper called a diploma is a huge barrier to opportunities in life regardless of talent, notes a Twitter user Paulee. Therefore, it seems consistent with Elon’s declaration that he doesn’t care if you went to college or not, "just if you have the chops," Paulee adds.

On December 25, Ping West's Chinese Edition published an article with a big title, saying "Giga-Sweatshop Meets Corporate Overlords: an Exclusive Look Into How Tesla China Runs its Shanghai Gigafactory 3." In that article, among other things, Ping West said despite Tesla's utilization of China Speed bringing ts market cap to around $610 billion, "the behind-the-scene stories inside the non-stop Shanghai Gigafactory have been much darker than the seemingly bright, miraculous outside."

Five days after this article was published Tesla China's VP Grace Tao responded and said, “Tesla manufacturers in strict compliance with Chinese law. It’s not in existence to scale up production by willfully sacrificing qualities."

In response to the FUD article by @pingwest, Grace Tao of @Teslacn VP says today “Tesla manufacturers in strict compliance with Chinese law. It’s not in existence to scale up prod by willfully sacrificing qualities”. Earlier @pingwest alleges defective parts are used in prod. pic.twitter.com/eOPraO1V3g

Thus, Tao's first response was about the alleged defective parts, as if Tesla is using defective parts in building MIC Model 3s, but today's response is important, showing how Tesla cares about the lives of its front-line technicians and engineers.

In the meantime, Giga Shanghai is expanding and recently Tesla opened its 20th store in Shanghai alone. This morning we learned that Gigafactory Shanghai achieved 8,000 weekly car production, and that MIC Model Y will have a "Bioweapon Defense Mode." 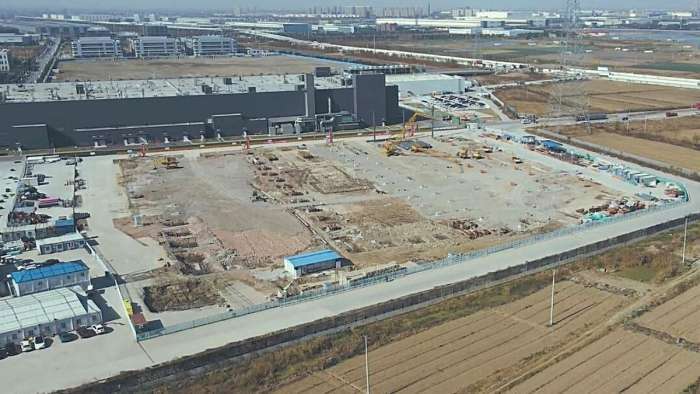 If you are a Tesla Model 3 owner, from China, or MIC Model Y, could you please comment about your car's quality and your overall experience with it?