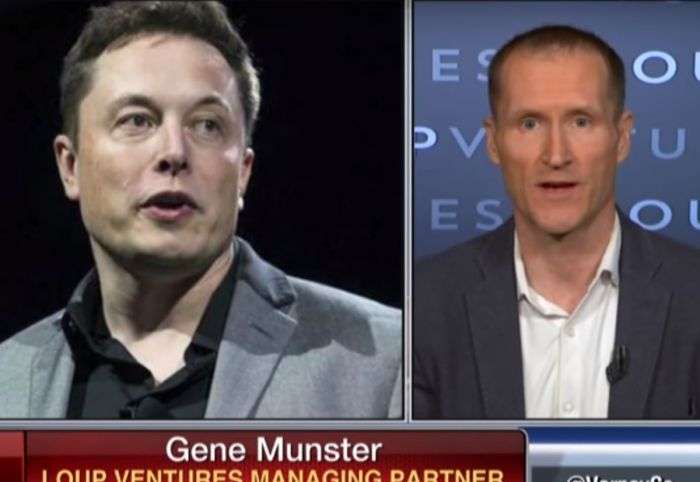 As I reported yesterday, last week was a roller coaster week for Tesla, in which the company registered nearly 3,000 new VINs for its Model 3, but near the end of the week another more positive story was emerging.

Elon Musk reassured shareholders during Tesla's 1st Quarter report that the company is able to keep production up for the Model 3 and actually increased the rate to 2,000 cars per week in the last week of March.

Tesla may not be out of the woods yet, but the car maker took two very significant steps this week that will push the company forward.

Fox Business spoke to Loup Ventures Managing Partner Gene Munster who spoke on the outlook for Tesla and detailed the two steps that the company took this week.

Munster says the Tesla story will be a wild ride over the next few years. For example, the TSLA stock was down about 35 percent the past month and has rebounded 25 percent just over the past few days. He says that wild ride will continue because Tesla is not out of the woods yet. But the company did take two important steps, which are as follows.

The second step forward is the cash piece. Investors have been concerned that Tesla may run out of cash and, "That's not going to be the case, at least in 2018," says Munster in the video interview, which you can watch below. In other words, Tesla appears secure regarding cash through the remainder of this year.

Tesla May Emerge as a Brilliant Tech EV Battery Company

Munster believes that once Tesla handles the above-mentioned two steps and is back to its mission, which is to accelerate the globe's adoption of renewable energy, it will emerge as a brilliant technology, electric car and battery company.

The car piece is one part, but the reason why he mentions Tesla's mission statement is because that really sums up this massive tech wave that we will experience over the next decade around renewable energy, batteries, electrification of cars and autonomous driving. And Tesla plays a role in all four of these fields.

How long do you think Tesla's wild ride will continue? When will it emerge stronger through the woods and reach 4,000 Model 3 productions per week? Please, share your comments in the commenting section below for discussion.

kent beuchert wrote on April 7, 2018 - 12:59pm Permalink
"Tesla is producing about 2,000 Model 3 vehicles per week. Now they want to double that and get to 10,000 Model 3s per week. " Pretty crappy math.Maybe that's Tesla's problem - they can't count. Gene Munster is a rather crazed Tesla fan.He claims Tesla will become a geat battery company. Tesla claims they are NOT a battery comany. They merely string bateries together (and not very well, as one can see from the last accident-their batteries ignite and incinerate, whereas GM's Bolt and Volt batteries never catch fire) . Using weak walled laptop batteries was a decision based on cost - it's a cheap way of building a battery pack - but stringing together tens of thousands of laptop batteries is insane engineering - those batteries were never designed to be strung together with so many connections.
kent beuchert wrote on April 7, 2018 - 1:07pm Permalink
Gene Munster has some bizarre logic here - he thinks because cars are going electric, Tesla will prosper when the automakers roll out their 120 plus electric cars to compete directly against Tesla. That's got to be the nuttiest thinking evah. The modest Chevy Bolt has already impacted Model S and Model X sales, which have cratered. The cars from Porsche and others are leaving Tesla's "technology" in the dust with recharging twice as fast, a dense recharge network of charging stations, far,far superior autonomous driving capability (Does Munster think Tesla's recent fatal and horrendous autopilot caused accidents are a plus for Tesla?) . And Sun City is wiping up Tesla's Solar roof business, and selling batteries ain't gonna make any company wealthy.