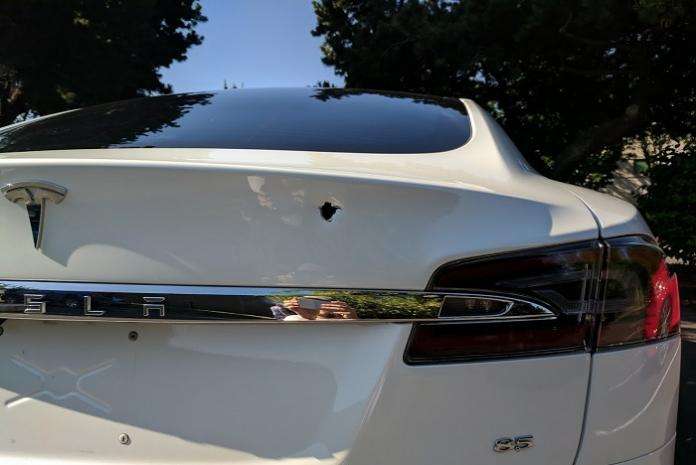 Some people have gone unbelievably mad as road rage shoots at Tesla Model S as it passes him in Portland, OR.
Advertisement

Tesla Model S owner shared this picture of his white Model S on Imgur showing how his white Tesla was shot by a man who was apparently raged when the electric car passed his Chrysler Pacifica. A case is opened and the news is reported by The Oregonian as well.

Beezel, who is the owner of the white Tesla Model S and goes by that name on Reddit, shared his story on Reddit Tesla forum.

"If you happen to see a Blue Chrysler Pacifica rolling on one spare tire (drive rear), be careful as and call Sgt. Blanchard with PPD regarding case # 17-272807.

"I was on my morning commute, heading up Marine Dr (this is in NE Portland), when I came up behind this car. Noticing the spare tire and the fact that he was driving 10 under the speed limit, I passed. During my (very safe) pass, he swerved hard left and drove me into the gravel. I accelerated away and saw him come to a complete stop in the road. At this point I'm guessing he was getting his gun, but at the time I just thought he was turning around or something. About 2 minutes later BLAM BLAM BLAM, I looked in my rear view and he had his arm out the window and shot at least 6 times at me from less than a car length away. I hit the gas and started passing people like crazy (sorry other drivers). After I put a few cars between us he made a U-Turn in the middle of the road and sped away. He hit my car twice, but thankfully it didn't hit me or any other bystanders.

"This all happened going Eastbound on Marine drive directly across from the Portland Yacht Club at about 9:03am. He then drove away westbound on Marine Drive. Any help would be very appreciated. There are a lot of Pacificas, but probably not a lot with a driver rear spare tire/donut.

"Hopefully this doesn't anger the mod-gods. Just be careful guys! Even a legal pass on a broken and slow vehicle can get you shot! Thanks and be safe! Just because you aren't a maniac doesn't mean the guy next to you isn't."

I don't know the details of passing because in the discussion people, who are familiar with the road, say the passing is illegal in that area. I am unfamiliar with the road, but still, it's outrageous that an angry man would stop his car and shoot at other cars. How far we, as a society and individuals, have gone in the wrong direction.

"I highly suggest you invest in a dash cam," suggests one person in the group discussion. He says it's a cheap investment and worth the money.

"Mine caught a guy breaking into my car while we were at an outside funeral burial almost 2 years ago. I put the thief's face up on Facebook as well as the video of the break-in and let the news spread like an All-Points Bulletin. It grew and became a little bit sensationalized on all the local TV stations and then spread to a couple of stations nationally. Because it was on the news and police were interviewed about this small everyday car theft occurrence, police and detectives became involved. After a few weeks, the thief was caught and still serving time in a correctional facility out in the middle of nowhere (my car break-in wasn't the only one). A simple car break-in normally ignored by the police turned into a mini man-hunt for the thief who broke into my car! Justice was served... almost. He had no money to reimburse me for the damages. It's funny how a little video from a dash cam turned into some big thing. Invest in a dash cam, it can be priceless," writes a group member named Max.

Please be safe and drive carefully. Try not to irritate any other driver on the road. Have you had any similar experiences? If yes, what did you do to stay safe?