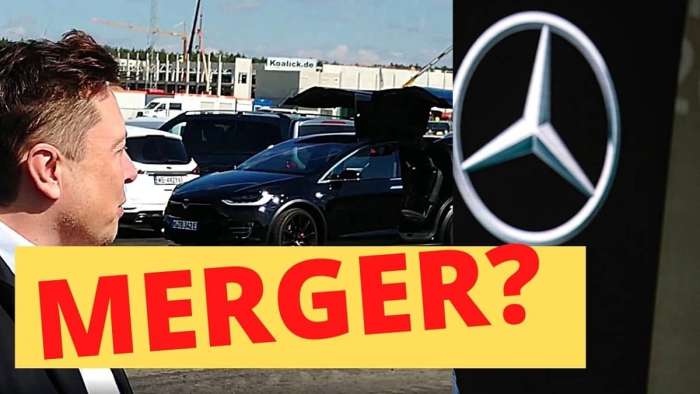 Several days ago Karlsruhe Insider's analysts made a forecast that Tesla Daimler merger is upcoming and that Tesla will swallow Mercedes-Benz's parent company Daimler "without asking." In this article I am taking a look why it's not a good idea for Tesla to merge with Daimler, based on the comments from Torque News Youtube subscribers.
Advertisement

Tesla buying any legacy automaker like Daimler would be like tying a boat anchor to a fighter jet. Plus, there is an opinion that Daimler is way overpriced as its ICE business and dealership will cost too much to get rid of that side of the business.

I would bet the quality of Mercedes is better then Tesla, but Tesla and other EVs will wipe out Mercedes if Daimler doesn’t speed up its EV plan and transform its business faster, which to be fair, Daimler is trying to do with more electrification and battery factories.

Besides, Tesla buying another auto making is insanely unwise. If Tesla wants to buy a business, perhaps it should focus on several key energy companies. In particular those companies that are energy providers to Tesla giga factories.

Also, if Tesla buys Mercedes, consider this. Shedding off the ICE business will be an immensely time consuming task that will take years. Why would Tesla get mired in that? There will be several brands available in the next few years, without that baggage.

Elon has already said will not do hostile take over on any German car makers . However he said he would have the conversation about that if any of car maker wants to have that conversation . I believe German car maker would eventually realize it is in their best interest to start thinking seriously about a joint venture with Tesla before it becomes obvious that their time is up.

But keep in mind that Tesla Daimler cooperation doesn't even have to be a "joint venture." It all comes down to who has the best tech. Tesla can say if you want my tech i will sell, license it to you. Why would i want to buy a potential customer?

So, regarding these Tesla Daimler merger rumors, I don't quite see the advantage for Tesla doing this. Why would Elon want to deal with the unions. I don’t know what Tesla would gain from Daimler. More managers? More obsolete machinery? I don't think this will happen. I bet at this point Daimler would like to be taken over so it is saved.

A merger with Tesla is not a wise idea because it would be like Elon Musk dragging a 50 pound rock behind him wherever he goes.

John Goreham wrote on December 20, 2021 - 10:46am Permalink
All I can say about this topic is that if Tesla does acquire a traditional automaker I will enjoy pointing out in every Tesla-related story that "Tesla builds and sells more fossil-fuel-powered cars than it does EVs."
JonaMauroux wrote on January 7, 2022 - 6:59am Permalink
Best tech. Well if you see a NIO and there cars he has not an energy company in mind but the battery tech of Mercedes. Their EV roll out isn’t under pressure but their tech is and will be good... German car makers have so many patents and patents pending but not set to an absolute. I guess elons AI that optimizes work flow pattern makes if powered is special. So the distribution is extremely satisfying but to have the minds of Mercedes and put them to work... I guess it will be wo serous how Daimler and Mercedes will develop.