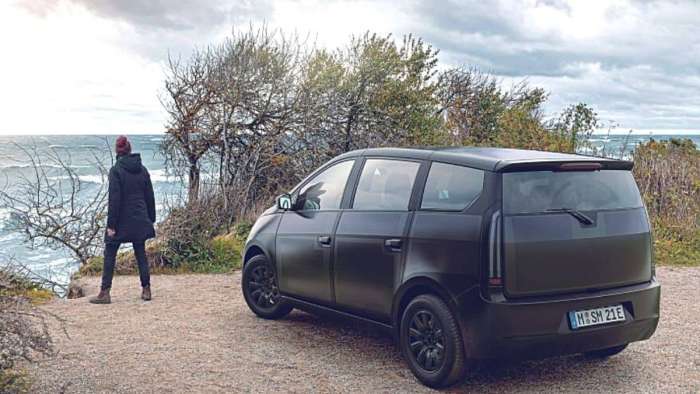 The German company Sono Motors is working on an electric car that can charge itself while driving using solar panels. Production is not expected to start until 2023, but the company could go public this year.
Advertisement

Sono Motors' solar "Sion" is a revolutionary solar car should be able to charge itself.

The relatively young Tesla competitor Sono Motors , based in Munich, is developing an electric car, in which 248 solar cells are built. As a result, the vehicle, which was announced under the product name Sion, can achieve an additional range of up to 245 kilometers per week. But the use of charging stations is still possible, as the manufacturer writes on its website.

The Sion can even serve as a charging source and supply other electric vehicles with power. Thus, not only can the model be operated entirely with renewable energies, no fossil energy sources are used in its manufacture. With the maintenance system from Sono Motors, it should also be possible to replace many spare parts yourself without having to bring any special knowledge with you - but independent workshops should also be able to carry out the exchange thanks to the company's documentation.

The vehicle is not yet in series production, but reservations are already being accepted. When ordering, a deposit of at least 500 euros is due, the vehicle itself should cost 25,500 euros. The vehicles are to be manufactured in Trollhättan, Sweden, in a former Saab factory from 2023.

Even if the already more than 12,600 buyers have to be patient before they receive their Sion, the company already seems to have more big plans for this year. Compared to the news agency Reuters, people entrusted with the matter recently stated that Sono Motors is currently aiming for an IPO in the USA, reports the Gernman-language Finanzen publication. This could be done as an IPO in the classic sense, but a merger with an acquisition company, also known as SPAC, is also possible. Various financiers invest in a shell without knowing the exact goal of the takeover. Only when sufficient funds have been raised does the SPAC look for an acquisition target and take it over. This enables companies to make the leap to the stock exchange, without having to deal with complicated applications and supporting documents.

Nevertheless, Sono Motors has already filed a confidential application with the US Securities and Exchange Commission. According to the source available to Reuters, the current stock market plans of the solar car manufacturer should also include the banksCiti and Berenberg be involved, with a valuation of one billion US dollars in the room. A start of trading with the Sono Motors paper is already possible this summer.

Sono Motors makes a name for itself with its strong partnerships

Sono Motors was founded in 2016 by Jona Christians, Laurin Hahn and Navina Pernsteiner with the motivation to take action against the waste of crude oil , as can be seen on the car manufacturer's website. The first functional pre-prototype was built in December 2015. With a crowdfunding campaign, Sono Motors was able to raise more than 820,000 euros in its founding year, so that the development of an actual prototype could begin.

In 2017 the vehicle was presented as the Sion. At the beginning of 2020, the company was able to bag more than 53 million euros in a community funding campaign. In a Series C financing round, Sono Motors won another 45 million at the end of last year, bringing it one step closer to series production. The main financiers here were Swedbank and DNCA.

Since its inception, the company has already announced some strong collaborations. Batteries from ElringKlinger are installed in the Sion , while the lighting systems come from Automotive Solutions Germany. With Continental , the young company was also able to bring another major partner on board. The DAX- listed supplier supplies the drive unit of the vehicle. In 2019, it was announced that Bosch Sono Motors would take over the data connections between the vehicle and the compatible app. Other partners are RLE International, ARRK and TRE.

Red wrote on March 25, 2021 - 3:14am Permalink
They have been talking about their plans for years, first they had two "prototypes" made by Roding, which was body swaps on BMW i3 although claiming their own construction. Now they have had Roding build two new prototypes which they previously said also were available for test drives by the public. They have now changed that to a display tour "due to Corona". The videos of the new prototypes reveals that they are not as refined as the earlier prototypes, the drive impression would be far worse. These prototypes are not useful for real tests, they are still more like concept cars. Solar charging has not been documented or prooved, only a 100 W output from the solar cells. What are the losses in the on board electronics that has to be awake during charging? My Tesla needs 350 W to stay awake, 100 W solar would give a negative result.
Bashiru musa wrote on June 6, 2021 - 4:41am Permalink
I'm interested in working with ur company. help me. Phone; +2348125594480 or +234812745623
Myron Chester wrote on July 29, 2021 - 8:16pm Permalink
Ready to invest in the future