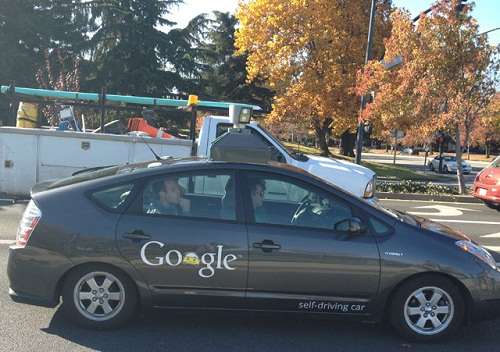 A self-driving small size Toyota Prius hybrid, with Google name on it, has been spotted in Google campus.
Advertisement

Barry Schwartz, the CEO of RustyBrick, a New York Web service firm specializing in customized online technology, was at the Google Campus recently, and took this picture of what appears to be a self-driving car. We don't know the car is made by Google, but the search engine's name is on the car and near the front tire there is a writing, which reads "self-driving car."

Google self-driving car was spotted on Tuesday, December 6. Barry was there, at Google's Mountain View campus around the GooglePlex, which is the search engine giant's corporate headquarters located within a larger 26-acre site.

"The car was packed with people. I wasn't able to tell if the guy in the driver's seat was operating the car or just sitting there watching," said Schwartz in a written statement to TorqueNews. "I was walking around the Google campus with Wysz looking for cool things to see and guess what? A self driving car drove past us and stopped at a red light - yea, all by itself, it is self driving. So Wysz and I snapped some pictures on our respective phones," writes Schwartz.

This is not the first time the news about Google self-driving car has broke out. According to Inside Technology Spectrum Google is already testing its robotic cars on public roads, apparently also inviting people to test drive them on occasion. "Google's fleet of robotic Toyota Priuses has now logged more than 190,000 miles (about 300,000 kilometers), driving in city traffic, busy highways, and mountainous roads with only occasional human intervention," ieee Spectrum writes. The project is not yet commercially ready, but judging from this picture, it is getting close to completion.

Auto Driver wrote on December 9, 2011 - 9:19am Permalink
GM also expects self-driving cars coming soon. In fact General Motors anticipates self-driving vehicles on streets by 2020. Does anyone think this generation will drive autonomous cars?
John Bailo wrote on December 12, 2011 - 10:46pm Permalink
This is fantastic Grouped technology that will transform the 21st century. Any part of it can go off in it's own direction, or coalesce into the perfect driving machine. My take is that we need self-driving tri-cycles -- to deliver takeout food and groceries. Once you get rid of having to build a vehicle to carry a 250 lb human around just to steer the wheel...possibilities multiply! How about it Google? Build us a self-driving Go-Kart/Little Red Wagon that can bring pizzas to the buildings!