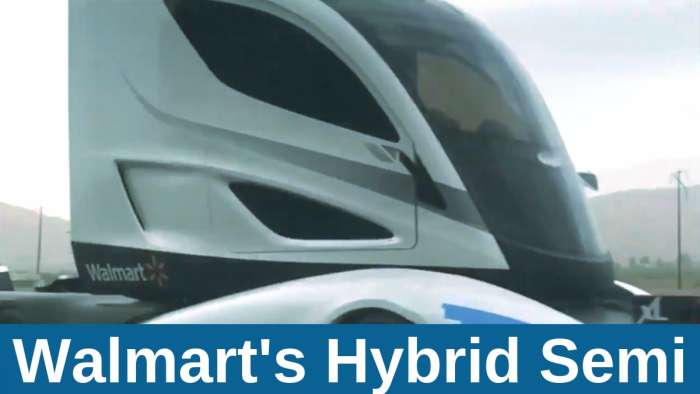 Rare View of Walmart's Hybrid Turbine Semi on I-10

Tesloop team yesterday spotted Walmart's Hybrid-Turbine Semi-truck prototype heading west on the I-10. It has a very sleek design. The exterior of the Walmart's hybrid truck looks very futuristic and, I would say, compact.

The original design of the Walmart's hybrid semi truck debuted in 2014. Walmart also ordered 15 Tesla Semi-trucks in 2017. In fact, not only Walmart, but companies such as Pepsi and Anheuser-Busch have also reserved Tesla Semi truck.

In its 2014 release, when Walmart was unveiling it's futuristic hybrid turbine truck with some electrified components the company said "Walmart trucks log millions of miles every year, so when it comes to sustainability and fleet efficiency, the goal is simple: deliver more merchandise while driving fewer miles on the most efficient equipment. As of last year, the company had achieved an 84 percent improvement in fleet efficiency over its 2005 baseline."

And then, for a long time there was no news about Walmart's Hybrid Semi truck. Now, all of the sudden we see them on U.S. roads. Probably Walmart's hybrid semi trucks have entered a new stage of testing. I think in the upcoming weeks or months we may have more about them or witness a new press release from Walmart on the status of it's hybrid semi truck.

Speaking of semi trucks, I think Tesla is one step ahead from Walmart. A few days ago we saw this rare video of a Tesla Semi driving on U.S. roads without a driver behind the wheel. Some people say there is someone sitting in the Tesla's Semi cabin, but looks like that person is not driving the truck. Rather, he is just monitoring the Autopilot. You can see it yourself in the video below, and please click to subscribe to Torque News Youtube Channel for daily Tesla and Automotive news analysis.

Video source @Tesloop. Let us know what you think about Walmar's hybrid truck in the comments section please. See you in the next story.