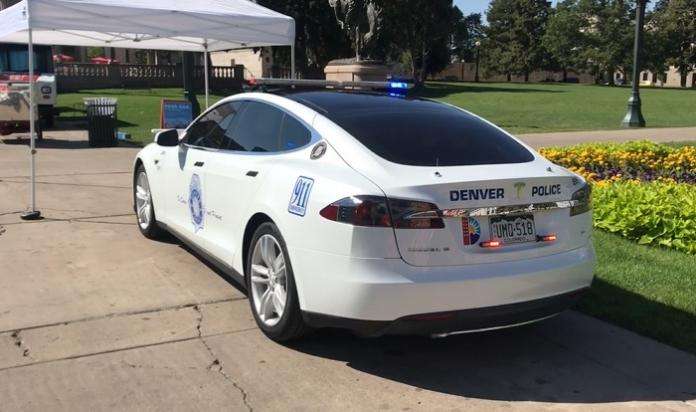 As Denver joins Los Angeles employing Tesla cars one man claiming to be a police officer explains why Tesla Model S is not yet fully suited to be a police patrol car, giving six valid reasons.
Advertisement

There is an interesting discussion on Reddit about the first ever Tesla Model S Police vehicle being spotted in Denver. As the short video shows it has custom interior and sirens built in. It does look very nice, but one user who says he is a patrol officer in a large metropolitan city explains why Model S is not yet a viable vehicle for police patrol. His points are very interesting and worth noting.

While I own an X and it would be awesome to have a Model S as a patrol car, I can tell you we are at least 10 years away from seeing any.

Tesla Model S blue and white would make a great community affairs car just like LAPD has, but otherwise it is not really viable.

6 Reasons Tesla Model S Is Not Viable for Patrol

1) Not everyone is an EV driver. Many old timers would not adapt well. When on patrol we tend to be more heavy footed than we are usually driving our regular civilian vehicles. Out of my Crown Vic's 19 gallon tank, I burn easily 9 gallons a shift. I run about 140 miles during that shift. That means I run almost as the stated mpg of 17 on this vehicle.

2) Which leads to range. Every single car used will have to charge nightly. You can't start a shift down to 50% SOC. We don't even like running half tank to start our shift. With that said, one mistake of forgetting to keep track which vehicles need to charge will cause that vehicle to be down for the next shift.

3) Electronics. We have our radios, our computers, our built in radars, horn, and lights. They are usually run off the 12v battery and the car must be idling or else it'll die. You can say that's a plus for electronics but it isn't considering the next point:

4) Idling. A patrol car spends most of its life idling, running the AC full blast during the summer. Officers who aren't used to EV will not get used to monitoring the electrical charge and thus will be reluctant to go back to the station(which is downtime, causing your beat partners to cover you) to go in and change to a charged vehicle and also offload and load their gear back. It'll be a hassle.

5) Pursuits. While a fast car is nice for pursuits, the likely of a pursuit isn't happening and honestly you don't need a super-car like acceleration to do pursuits. While it's important to catch a suspect in a crime, it's also important that the officer goes home to their family and others don't get hurt in a wreck. Police work is pretty mundane. Dangerous but usually boring.

6) Maintenance. You expect 15 year veteran mechanics to train to repair an Tesla? Many of them groaned when the switch to the Taurus came about, imagine a Tesla. The Crown Vic was incredibly easy to repair and reliable.

And lastly, most officers will get a vehicle dispatch to them that is shared. Imagine that grossness of that Tesla.

Image source: Screenshot from a video on Reddit, linked above.