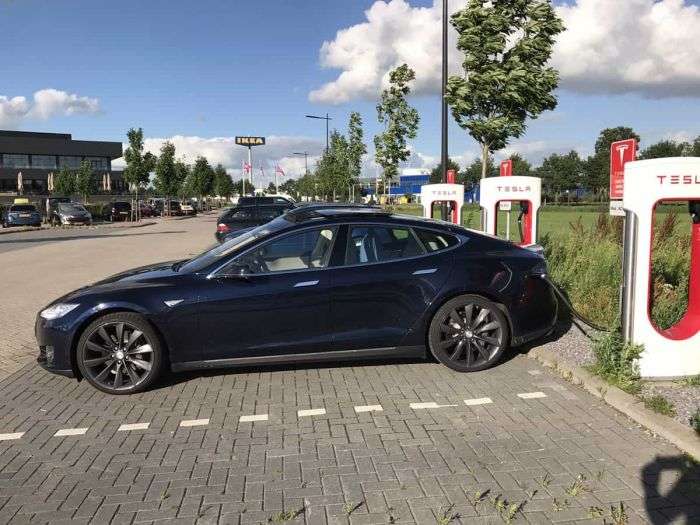 "Does anyone know if Tesla recommends that one should plug their car in every night or wait till battery gets to a lower level. Does it matter? I charge to 80%, but sometimes only drive 40miles round trip to work daily," asks Chris Less in Tesla Model S Owners group on Facebook. Questions like this about how often to plugin and recharge your Tesla are common. Let's take a look at how Tesla owners plugin and charge their cars and what Tesla recommends.
Advertisement

Apparently there is no harm to the Battery if you keep it plugged in all the time when not driving.

Most people suggest in the group to always charge your Tesla Model S if you can.

They say feel free to plug your Tesla in whenever you want. Most people think they will harm their car battery if they charge too often. But apparently you won’t do the battery any harm by charging to 100% as long as you plan on leaving within the hour of reaching a full charge.

Wesey Chuen, another Tesla Model S owner, remembers that someone has once asked Elon Musk a very similar question. "That person uses quite a bit more than you do each day," he replied to Phil. "Elon said it's better to charge to 80% everyday," Chuen writes.

But this personal Tweet from Elon Musk shows that charging to 80% is better than to 90%. He posted this a year after his 85%-90% post, which I can't find now on the internet.

Tesla's Recommendation About The Battery

Here is a little short quote from Tesla's recommendation about the battery charging in which Tesla says the following:

"The most important way to preserve the Batter is to leave your vehicle plugged in when you are not using it. This is particularly important if you are not planning to drive Model S for several weeks. Model S wakes up when needed to automatically maintain a charge level that maximizes the lifetime of the Battery.

There is no advantage to waiting until the Battery's level is low before charging. In fact, the Battery performs better when charged regularly," reads Tesla's Owners Manual.

Everyone, including Tesla, recommend plugged your in your EV at all times. As Tesla's manual reads you Battery performs better.

Alan wrote on March 1, 2019 - 11:48pm Permalink
CHARGING — FROM TESLA MANUAL Tesla strongly recommends leaving Model S plugged in when not in use. This maximizes the lifetime of the Battery Your Model S Battery is one of the most sophisticated battery systems in the world. The most important way to preserve the Battery is to LEAVE YOUR MODEL S PLUGGED IN when you’re not using it. This is particularly important if you are not planning to drive your Model S for several weeks. When plugged in, Model S wakes up when needed to automatically maintain a charge level that maximizes the lifetime of the Battery. This also protects the 12-volt battery. There is no advantage to waiting until the Battery’s level is low before charging. In fact, the Battery performs best when charged regularly.
Bachu Patel wrote on March 26, 2019 - 8:28pm Permalink
What do I need to do to ensure my Model 3 charging current stay at 30A It keeps changing from 30A to 48A.after every charge! Thank for your help Bachu Patel
Pat wrote on January 22, 2021 - 8:05am Permalink
If no daily charger available, can Tesla S be super charged every ten days?