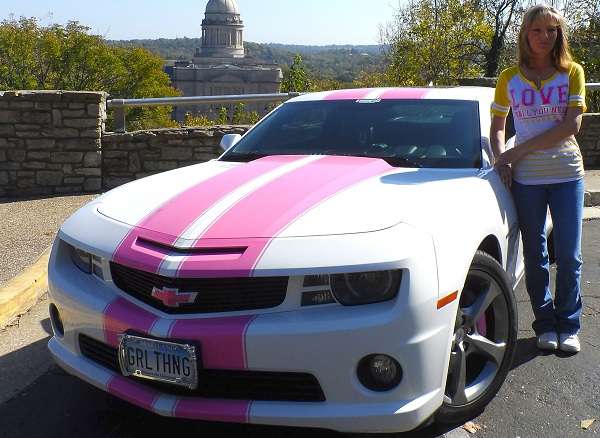 Here is a tale of two ladies, one a Pink and White Camaro 2SS, the other, the owner who envisioned her. Shannan T has been a "Camaro Girl" since she was 13 years old. Her fascination with the brand started in her home town of Frankfort, KY.
Advertisement

"I was at the neighborhood country store and saw this Canary Yellow 1969 Camaro SS with black Rally Stripes; I can still hear the rumble of the motor and smell that exhaust. It had been modified in every way possible; and my heart actually skipped a beat since that day, the Camaro has been my dream car," Shannan says.

Bella as the eye catching Pink and White Camaro is affectionately named, is not the first Camaro Shannan has owned. “I had a 1995 Red SS in 1996. I had to give her up because I got pregnant with my 3rd child; just not enough room in that back seat for two toddlers and a car seat. In 2001 I bought a 1995 Z28; it took me over 2 years to find her; It had to be a Z28 and it had to be a 1995”. She was determined to find a pre-96’ model, because that is when GM decreased the horsepower of the Z28, and she wouldn't be satisfied with that. Unfortunately that Z28 was totaled in an accident; “I cried like a baby that day”, she told us. Shortly after that GM clamped down on the high performance market outside the Corvette and ended both the Camaro and the Firebird brands in 2002.

Ever the “Chevy Girl”, Shannan kept the faith; she bought a 02’ Monte Carlo SS, LE (NASCAR Edition). But a V6 is still a V6 to a Camaro owner; she was content, happy even. But then in 2006 the rumors started. Her brother sent her a link to an article, and images of the proposed reintroduction of the Camaro SS. She was once again dreaming of her ultimate ride. The Camaro concept car quickly became the background image on the desktop of her computer; a constant reminder of her dream car (in Rally Yellow with Black stripes, just like the one she remembered from her childhood). Then a funny thing happened to her vision of the dream car she always wanted TRANSFORMERS.

In 2007 Michael Bay brings back the 1980’s greatest toy and cartoon franchise, “TRANSFORMERS”, in a live action, big budget Hollywood production. As we all know by now, one of the biggest changes to the main “Autobot” characters of the franchise, was to the fan favorite “Bumble Bee”; an Autobot who had always been represented by the VW Beetle. Yet in Bay’s new imagining Bumble Bee becomes the Camaro SS concept car; the same Rally Yellow with Black stripes concept car Shannan had on her computer’s desktop for more than a year.

As the anticipation started to build toward the 2009 relaunch of the 2010 model, she can’t wait. But the new Camaro wasn't the same “Drivers sports car” it was eight years earlier, or in the previous decades…The new Camaro SS came with a base cost of just over $30,000.00; “I couldn't afford it! Three kids, one about to start college, and every day I see new Camaros’ drive by”. She still wasn't please with the reimagining of Transformers, knowing that now every 18 year old kid in America with deep enough pockets wanted the “Bumble Bee” Camaro. So as she told us, “My color scheme had to change, and I was in no hurry. The Monte ran like a champ, and I knew there was no way I was getting a Camaro anytime soon. But my husband promised me that when it was time to replace the Monte I could buy a Camaro!!!!” Two short years later, or two very long years later, depending on your outlook, the time to replace the 02’ Monte Carlo came, and in January of 2013 “Bella” was born.

The entire concept of “Bella” came from Shannan’s imagination. From the bumper to bumper rally stripes to the pink on white color scheme; even the nearly 3,600 Swarovski Crystals she personally used to jewel the front and rear bowtie emblems with came from her ideas. She didn't do it all alone though; there was some pro work done on the rally stripes, break calipers, vents, and SS emblems by Steve Hammett at New Image Auto Body, and the tint by D&G Customs, both in Leonardtown, MD.

When we asked her about her personalized tags, there was no miscommunication in their purpose, “I just knew everyone was going to think I was crazy for putting Pink on a muscle car, so I decided to get personalized tags to explain why I did it. “GRLTHNG”, I figured I would put that on the tag so when someone asked why I put pink on a Camaro I could say it was a girl thing. But no one ever asks! Everyone seems to ‘get it’, and love it. I must say she gets lots of attention; everywhere I go people are taking pictures of her.”

No matter what anyone tells you, beauty has its rewards,…”One night we were going to a store and as I pulled into the shopping center we saw a lot of cars over by themselves. My son said ‘look mom a car show”; my husband said “pull over there I want to see them”. As I got closer he said “look there is a Camaro, oh there is two, wait they are ALL Camaros’! “ About that time I hear a lot of screaming “HEY COME HERE!” I pull in and get swarmed by a large group of people and I hear someone say “Look it’s the PINK one!” I asked what was going on and was told they were the Southern Maryland Camaro Club, did I want to join? I said sure, OMG! I never thought there were a group of people that could make buying my Camaro any better of an experience. We have so much fun going to car shows and taking cruises. They are a fantastic group of people. And we are learning so much about our cars. I never thought that buying a car could enrich my life the way this one has”. In fact the rewards have been more than just “cool” comments. In her first year “Bella” has entered three shows and placed in all three, the most important of which was her 1st Place finish in the Mild Modified division of the 2013 Camaro Nationals, held in Frederick MD.

Shannan and her husband Joey have become somewhat of a Camaro “power couple”; not to be outdone by his wife and her imaginative concept, Joey recently acquired a 2010 SS, and has been hard at work creating a darker black and blue image of the concept; sort of a “his and hers” dual garage, or maybe dueling garage?

Wayne Stacy wrote on January 4, 2014 - 7:19pm Permalink
Several images of the car I submitted with my original article can be viewed here on my FB Fan page here: www DOT facebook.com/PhotographicMagicPhotography/posts/647869505251725