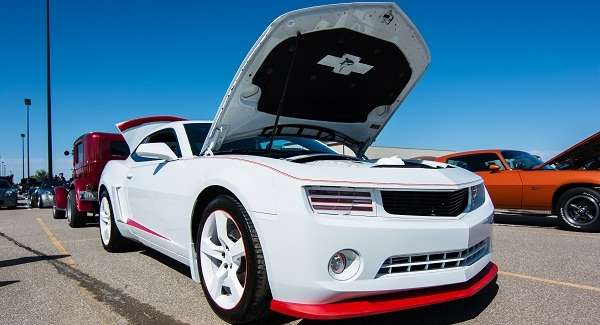 Ryan Goll from Oklahoma City, OK shares the story of his 2012 Chevy Camaro LT/RS, which was at some point also featured at The Chevrolet Camaro Facebook page as Fan Power and was just recently featured in the latest issue of AFX Magazine. Here is Ryan in his own words.
Advertisement

It all began on a chilly January afternoon in Midwest City, OK. I had been wanting to test drive a Camaro for some time, but kept putting it off. My wife was in the market for a new SUV anyway so I figured my chance would come sooner or later. We looked around at different SUVs for her and ended up at Hudiburg Chevrolet.

To take a break from looking at SUVs, my wife mentioned something to the salesman about me wanting to test drive a Chevy Camaro. And this is when the journey began.

We started cruising the lot looking at different Camaros. I had no idea about the options or trims, just that I was interested in the orange metallic color. And then it appeared. A custom ordered Summit White 2012 1LT/RS Camaro in the back of the lot. My wife saw it first and pointed it out. It had a heritage grille which caught my eye first. I think I was sold as soon as I walked up to it. Turns out it was a custom build, but the person later changed his mind and man am I glad he did. I walked around and said "this one. Let me test drive this one." That's all it really took. I watched the mileage go from 19 to 20 in a few short minutes and I was sold. I would trade in my 2007 Cobalt for it that night. We also ended up taking home an Equinox that same evening.

It was brand new with only 19 miles on it.

The Shark is special to me for so many reasons. Mainly because I have never had a car that was worth looking at. I was never really into cars and modding a car was the furthest thing from my mind. But it turned into a hobby very quickly. My 2012 Chevy Camaro LT/RS is special because it is unique. Its not like every other Camaro on the road. It stands out. I have put a lot of blood, sweat and tears into my car. Literally. It has come a long way and I have loved the journey. I may get some tough love from time to time like "But it's only a V6" or "Why the red all over?", but it doesn't bother me. It's the fastest and nicest car I have ever owned. It's a V6. So what? Oh and the look is too much for you? Sorry, but I don't want my car looking like everyone else's. I get compliments all the time so I must be doing something right.

It's hard to say what I like most about it. There are so many things that come to mind. With that being said, I'd say the uniqueness of The Shark is what I love most. I have yet to see another Camaro like it. From the white wheels to The Shark theme throughout, I have made it my own, and it seems to gain more popularity each day. It stands out. Its that simple.

Aside from its uniqueness being one of my favorite things about it, just driving this Camaro in itself is an experience. The Shark is my daily driver and I wouldn't have it any other way. This car is too nice and too fun to keep under cover in a garage. Yeah, it may get more miles and more wear and tear being a daily driver, but that's why I bought it: to drive it. I didn't buy it to park it inside. The Shark looks better on the road anyway. So, aside from being my daily driver, it also gets some miles whenever I'm meeting up with the Oklahoma Camaro Club. Whether its for a show or event, or even just to grab food, we arrive in style. Nothing more beautiful than 20-25 Camaros cruising down the highway together. Quite a sight to see.

There is still a lot in store for The Shark. Not sure it'll ever be "done". But I definitely have some awesome plans for it in the next couple years.