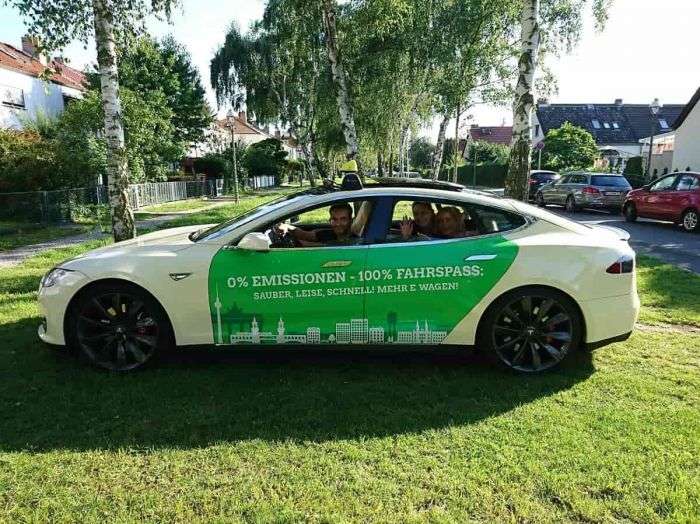 Martin Doll used to blow exhaust fumes in his diesel taxis. Then the Berliner moved to Tesla. With his Model S he shows that electric cars can work as everyday cars, and people like it the way he promotes EV Taxis in Berling.
Advertisement

The fact that a taxi driver now drives through the Berlin without emissions is for him probably the biggest surprise. "I always thought that I had diesel in my blood," says Doll to Welt, but in the meantime, electricity is clearly "flowing through his veins."

Doll was proverbially electrified and so infected by the electric car virus. You can blame the Tesla Model S. By some detours and happy coincidences, finally he gave up his Mercedes E-class, which he was driving for the past 20 years as a taxi driver in Berlin and switched to Tesla Model S.

Tesla taxis are becoming more common. And apparently, this is one of the best ways to make use of Tesla's reference code and make money.

Doll, who is 55, doesn't miss his diesel Mercedes E-class. He is already enthusiastic about his Tesla Model S from Silicon Valley. "There is no better job," enthuses Doll.

"Mercedes-Benz costs about 40,000 Euros and Tesla costs around 80,000. But the maintenance fee for Tesla is much lower than it for Benz. Besides, I can save 8,000 Euros by using electricity instead of gas. Moreover, Tesla provides car buyers the WiFi of Tesla so I can save WiFi fee as well. But the most important thing is that this car is all electric powertrain. It’s better for people’s health and our environment," Doll tells one of his Ken Chang, a photographer, who used his Taxi service in Berlin.

It's crisp cold outside, but in Model S, Doll can heat every single seat in his car individually. The engine does not have to warm up either. The over 400 hp and 600 Newton meters of torque are available from the first second. EVs are known for great torque.

For a taxi this is an insane achievement.

Taxi Driver's Career Out of Conviction

Doll is from Karlsruhe. As a young man he came to Berlin after high school to study journalism. Incidentally, he worked as a taxi driver. At some point he dropped out of journalism studies and started making a career as a taxi driver.

But Doll did it out of conviction that he still loves the freedom he has as a freelance taxi operator, he says. He usually gets into his car in the early evening when the roads gradually become freer.

Frustrated by Mercedes for Lack of Hybrid, Testing Prius and Going for Tesla

"I was always annoyed that Mercedes never had a hybrid in its line of models," says Doll. For years, Daimler promised taxi drivers the introduction of a hybrid, but it never came.

Toyota has the Prius meanwhile, for 20 years in the program and has proven that the car is reliable. In addition, calculate the lower consumption for frequent drivers in the taxi industry. Doll test drove the Prius as a taxi and was convinced.

But then came an offer from Tesla. He test drove the Model S and remembers the experience. "I got out of the car and did not understand the world anymore. I thought I was coming back from the future."

The problem was the cost. He drives the Model S P85, which costs almost 100,000 Euros. But the bank financed it generously and he bought the car. As you can see from this image, taken from Doll's Facebook page, he advertised the green way of life and partially covers the cost.

Today, Doll calls himself an "Ambassador of e-Mobility" because he has long been convinced of the advantages of the electric cars. At Tesla's Superchargers the taxi driver is currently charging for free. He uses it on long distances. He travels from Berlin to Munich in seven hours, including a 30-minute charge break.

There are not many electric taxis in Germany yet. "The taxi industry is conservative right down to the tips of its hair," says Doll. The self-proclaimed ambassador of electromobility is therefore still has a lot of persuasion to do.

But he likes to do it. "I do not just like chauffeuring my passengers," says Doll. "I also like to discuss with them."

When you call Uber or another taxi service do you give preference to an electric car? Please, let us know your thoughts in the comments section below for discussion.

Toyota's First EV Will Have a Name of BZ: Toyota BZ
First Videos From Inside The Boring Company's Las Vegas Loop
END_OF_DOCUMENT_TOKEN_TO_BE_REPLACED