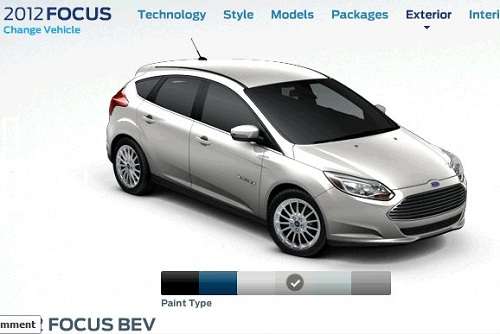 Electric Ford Focus vs Chevy Volt: this was one of the first question people immediately asked as Ford unveiled it's price and build tool for the 2012 Electric Focus.
Advertisement

The 2012 Ford Focus Electric Build and Price tool is live. Consumers now can build and price their Electric Focus at http://tiny.cc/FEBP. After one puts his or her Zip code, a new page opens with a starting MSRP price of about 40,000 dollars. Actually, it's $39,200, but 7,500 dollar Federal Income Tax Credit.

For comparison Chevy Volt, which gets you a 109mpg and endless range, costs $39,995. The price of Nissan's comparable electric Leaf is few thousand dollars cheaper. It's $36,050. All of these three cars are eligible for the above-mentioned tax credit.

Presented for the first time in January 2011, the 2012 electric Focus is now available for booking across the United States. It will be delivered at the end of the 2011 and early 2012. The lithium powered batteries can reach a speed of about 85 miles per hour.

There are certain improvements over Nissan Leaf and Chevy Volt. "The Focus Electric looks great on paper; with an 84mph top speed, an expected 1 eMPG (electric car equivalent to miles per gallon) improvement over the Chevy Volt, a full charge in half the time of the Nissan Leaf and most interestingly, an automated charging system from Microsoft that helps to keep electric costs down…but many consumers with no electric car experience wonder how fast (or slow) these new vehicles are. This acceleration demo area showed that the Focus Electric provides plenty of get-up-and-go for the average driver while creating no harmful emissions," comments Patrick Rall, Managing Editor of Torque News.

This environmentally friendly cars can be recharged on a 240V outlet in 3 to 4 hours.

The Ford Focus is an electric car packed with new technologies. The gearbox has been specially developed for this type of environmentally friendly cars , it allows to pass quickly the torque and power, delivered by the engine to the wheels, while ensuring there is silence in the cabin.

There is also a cool smartphone application by Ford which allows the driver to remotely manage the battery and find the closest charging stations. Those who tend to forget to recharge their electric cars may find this application very handy and helpful.

The price of the 2012 Electric Ford Focus is nearly twice as high as the price of the regular Ford Focus, the MSRP of which is only 16,500 dollars. Torque News has contacted Ford asking what justifies the current pricing. We have not yet heard back from the company.

Anonymous wrote on November 3, 2011 - 10:23am Permalink
" Torque News has contacted Ford asking what justifies the current pricing. We have not yet heard back from the company. " Nor will you. There is no justification. This is as stupid as the bank of america and thier charges.