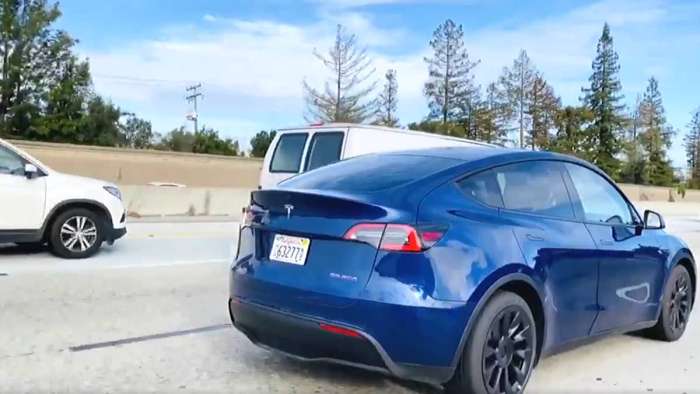 This is a review from one of the first Tesla Model Y owners, who reviewed his Model Y from 17 angles and shared it with the Tesla community.
Advertisement

In this Model Y review, I am going to share with you 17 things that a new Tesla Model Y owner has learned from his Model Y, which was delivered to him yesterday. He learned these 17 things about on the first day of his Tesla Model Y ownership and shared them with a Tesla community for other owners and enthusiasts to see.

A user, named Silversmith, who just joined Tesla Motors Club from Utah two days ago, posted this interesting update about his Model Y delivery and what he has learned from his news electric crossover.

Here is what Smith writes about his Model y buying experience provides his first review of the Model Y.

So I have no clue how I was chosen to receive our Model Y today, and I was expecting them to say that there was a mistake when I arrived at the SLC, UT Tesla showroom. We circled around the lot in our 2018 Model 3 and saw no Model Y's at all. We walked in and told them that we are expecting to pick up our Model Y and told them our names. They were expecting us and had everything ready to go. The car was in a bay, cleaned and ready for us. We handed them the check, showed insurance evidence, signed about 7 papers and we were allowed to start setting up our phone keys and drive away. We were asked to sign a media waiver and had our picture taken with the delivery guy (maybe he was a manager).

"Now what is interesting is that we only ordered our car in January 2020. It was a Midnight Silver Metallic, fully loaded with the exception of the white interior and third-row seating. So our Tesla Model Y is the Performance version. It has Tubertine wheels, black interior, and full self-driving," wrote Smith.

"What I have learned in the last 12 hours," writes Smith.

• There is no HomeLink (our Tesla Model 3 AWD has this included). I think you have to order it for $300 and have it physically installed.
• There is no hatchback shelf, nor a place that you could add one later.
• The wheels of the Model Y are different sizes on the front/back (wide ones, so this explains why the upgraded wheels take so much of our range, they aren't only 21", but also taller and wider).
• The seats are 3.5" taller than the Model 3 (I am talking about the driver’s seat).
• There is no hidden receiver hitch included, but there is a spot so we will be able to add one later.
• There is wireless charging for two phones. Not as nice as the aftermarket one I have on my Model 3, but nice to not have to pay for it as an add-on.
• There is a single USB C port under the charging pad that supplies the power, as well as a standard USB for a USB flash stick for Sentry/Dashcam.
• The rear seat has 6 levels of recline, they are small increments and give you a decent amount.
• Rear seats are fully powered for release and have two buttons in the trunk to do it remotely. And even the ones on top of the seats are powered.
• The middle seat can separate from the drive with a latch behind the middle seat. A post sticks out, which is interesting.
• The power liftgate is fairly basic, it opens from the outside as Model 3 does. Closes with a button on the liftgate.
• The trunk of the Model Y is huge, with two under bins. One is very shallow though, but still useful.
• Compartments on the sides of the trunk of the Model Y are deep and nice for keeping things from rolling around.
• The second-row seat of my Tesla Model Y is the same width as the Model 3 (51 1/4").
• There is a significant blue tint to the paint (compared to our Model 3 of the same color).
• Panel gaps of the Model Y seem really good, better than our Tesla Model 3.
• The Tesla Model Y seems quieter, but then it is a brand new vehicle (compared to our M3).

The Tesla Model Y is about 10% larger than the Tesla Model 3, with a drag coefficient of 0.23Cd, and has about 75% of the same components. It has a panoramic sunroof and an optional 7-seater layout.

With the Tesla Model Y, the electric car manufacturer is bringing the most popular form factor, the SUV, into the mainstream. The Model Y is said to be around $ 13,000 more expensive than Model 3 at around $ 53,000 - but much cheaper than the almost $100,000 Model X.

Let me know of your review of the Tesla Model Y and what you think of this electric crossover if you are one of the owners or recently had your crossover delivered to you.

See you in my next story in which a Tesla Model S owner discusses 3 reasons he choose to buy a Model Y over the Model 3.