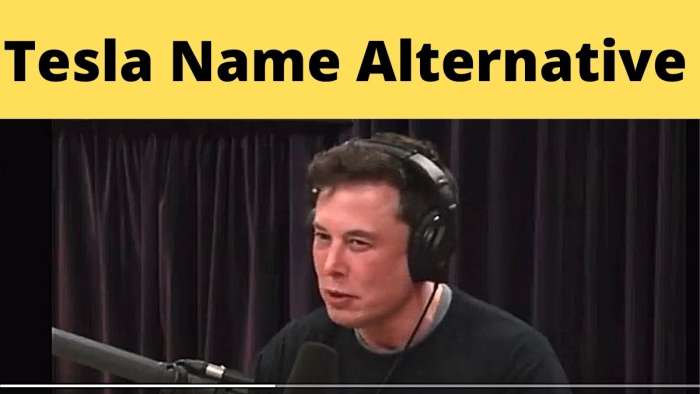 Did you know Elon Musk had an alternative name for Tesla Motors as a company name, which a competitor ended up using?
Advertisement

Today, our friends at Tesla Silicon Valley Club on Twitter shared an old interview with Tesla CEO Elon Musk in which he talks about the name Tesla Motors and how he acquired that name for his electric vehicle company.

In that interview, the link of which I will share in the description of this video Elon Musk tells a reporter that he didn’t come up with the name Tesla Motors. He sent the nicest guy in the company to go sit in front of the house of guy’s house who owned the name to buy it. Eventually the guy sold it to Elon Musk for 75,000.
The guy in Sacramento didn't just own the name, he founded the company. Tesla's Wikipedia page reads, "Founded in July 2003 by Martin Eberhard and Marc Tarpenning as Tesla Motors."

Most of you probably know this story, but what was new, was the alternative name for Tesla, which Musk himself revealed just an hour ago on Twitter, commenting under Tesla Silicon Valley Club’s tweet.

Musk said, “Haha true! The top alternate name, if we couldn’t acquire the Tesla Motors trademark, was Faraday, which a competitor ended up using.”

Haha true! The top alternate name, if we couldn’t acquire the Tesla Motors trademark, was Faraday, which a competitor ended up using.

So how is Farady Future doing these days?

Some people say it isn't doing too well right now. Others say it will be a miracle if Faraday ever ships anything and ends up staying in business long enough to support those cars.

I am looking at Faraday Futures news and I see the EV company just named a new CFO as it looks to start production. Walter McBride will serve as finance chief, succeeding Zvi Glasman, who is resigning. Also, as the company gears up for production, it's currently seeking local talent and will be hosting a job fair as it ramps up for production. The job fair will run from 4:30 to 7:30 p.m. on Nov. 10 at the Hanford Civic Auditorium in Hanford California.

LG's New EV Battery Plant Is a Welcome News for Tesla
Tesla Giga Berlin's New Hurdle: It's Not Only the Gov't, but Now Tesla Itself
END_OF_DOCUMENT_TOKEN_TO_BE_REPLACED