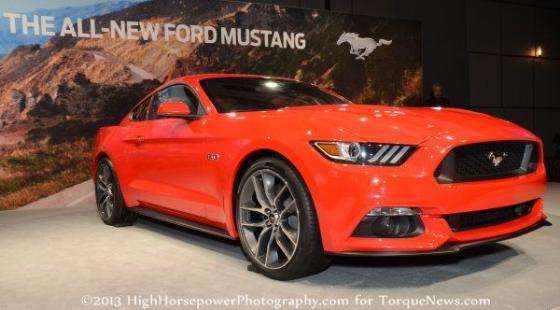 Could we 'Boost' the Mustang even more?

There have been recent questions regarding engine options for the new S550 Ford Mustang. The largest among them has been whether or not there is room for a V6 EcoBoost model between the midrange inline 4-cylinder EcoBoost and the high-end naturally aspirated 5.0 Liter V8.
Advertisement

Frankly, in my opinion, it depends. For reference, please see Patrick Rall's original story titled There is Still Room for an EcoBoost V6 in the New Ford Mustang.

The BOSS 302 Laguna Seca-Edition puts out a Ford-estimated 444 horsepower and 380 ft. lb. of torque, and in my opinion, Ford would need to beat both of those figures to meet the aforementioned performance requirements while remaining competitive with other closely priced competitors.

Unfortunately, we also don’t yet know if straight-line speed was a performance target for the new Ford Mustang. Putting that question aside, the slight weight gain and an uncertain new IRS package emphasizes a greater expectation for comparable, or even slightly better performance figures than BOSS 302 Laguna Seca-editions.

The Gap?
Were the EcoBoost 4-banger to arrive with 350 horsepower along with a decently matched torque rating, while making little improvement in output from the 5.0 Liter GT powerplant, I don’t think there would be a large enough gap between these two models to justify an intermediary EcoBoost V6. It is my opinion that the naturally aspirated V6 is on it’s way out, the EcoBoost 2.3 Liter will take over as the base model and that would leave some room for an EcoBoost V6 to sit squarely in the middle. Don’t expect any changes to the 2015 model year, though. The S550’s have a long way to go, and 2016 would be the first model year that we could even begin to see changes.

At this point, we’ll have to impatiently wait for Ford-provided performance numbers to even know if there is room for flexibility.

The Future:
One thing is for sure, Ford has been doing an excellent job at developing these EcoBoost engines. They recently raced an 3.5L EcoBoost-powered Riley Daytona Prototype at Daytona, where they broke the previous closed course speed record at 222.971 MPH, while also setting FIA records for standing start 10-mile and 10-kilometer runs.

I, for one, am certainly excited to see what the future of EcoBoost-based Ford Mustang brings.

Chance wrote on June 28, 2014 - 2:39am Permalink
I think you are right, too soon to say for sure what FoMoCo's plans are except that the EcoBoost Mills will be hiding behind chrome ponies for a long time to come. They are simply too successful not to be. You left out one aspect though. Advancing technology. With the huge improvements we have seen in power/displacement using EcoBoost, Ford may be able to develop engines that meet both performance AND mpg goals with just 2 engines. Such as a smaller EcoBoost v8 with 450hp and 35mpg hwy and a beefed up EcoBoost 4 to increase base performance while maintaining economic. Seems more likely to me than throwing a bunch more money at R&D for third engine. Manufacturing goals are moving targets though so it's anyone's guess. Well written article by the way, I enjoyed it.