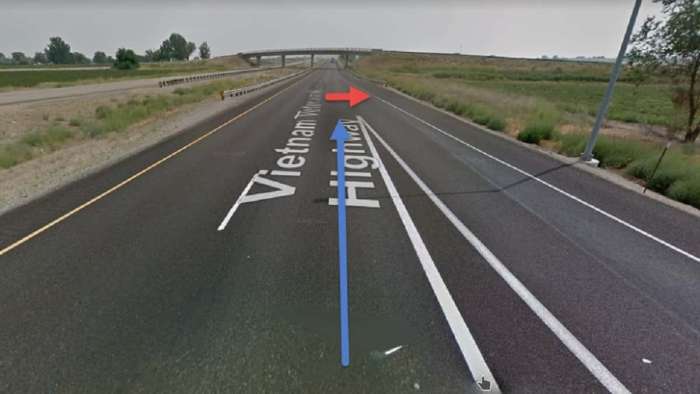 Sam Dominic is requesting a tip to solve this common Tesla Autopilot problem related to right lane merging. While Autopilot is in Beta it can freak Tesla passengers when this happens.
Advertisement

Yesterday I read this interesting tip request from Tesla Tips & Tricks (a Facebook Group) admin Sam Dominic about a serious Autopilot problem that I want to bring to Torque News readers attention (and perhaps Tesla's attention) that needs to be solved.

"When driving on a highway in the right lane (U.S.), just after driving by where a lane is merging onto the highway to my right, my car will often veer quickly to the right to try to stay centered between the lines. Has anyone figured out a way to stop this from happening, other than disabling AP? This happens when there is no line between the lane coming onto the highway (acceleration lane), and the travel lane," Dominic writes.

"Here is a picture I grabbed from the Net (see above). The blue arrow is the travel lane. The red arrow shows how there is no lane marker except to the far right. Sometimes, the triangle area is much shorter, creating a much wider lane between the travel and acceleration lane. This often causes my car to move very quickly to the right, to stay centered.

"This can cause my passengers to freak out, and me to have to take control from the Autopilot to avoid such a swift course change," Dominic concludes.

Most Tesla owners in the group comment back and agree that this is a very common Autopilot problem.

While Autopilot is still in Beta, it will probably be in beta for years at the pace it is going.

One solution is for the people who make roads. The people who create the roads should be using a dashed lane marker. Lots of roads have them, but some don't. There is no real consistency. We can guess that the roads in California where where Tesla does most of its testing may have lines there, but in states like Missouri they don't. "I have noticed when traveling in other areas that some locations have a dashed line by the exit and the AP does fine. In my area there is no line and I would also like to see this improved," comments Jeff Kesterson in the group.

We need more consistency in the national road system, but until then Tesla must come up with a solution as soon as possible.

The simple explanation to this Autopilot problem is that the camera "sees" the sudden change of stripes and attempts to re-center between the newly recognized (what the computer determines) is a lane.

There is a manual solution.

"Best solution I have found is to use the turn signal to get the car into the left lane and then move back to the right lane once you are past the merge area. Added advantage is that you give a wide berth to any cars that happen to be merging in. It's manual intervention, but it works pretty gracefully unless there's a ton of traffic, comments Sam Fursey in the group.

Although, sometimes there is no moving over, though. This may be just a quirk that will have to be lived with until Tesla figures this out better. But until Tesla finds a solution, drive one lane over where you can.

Has this happened to you? If yes, how did you solve this? Please, share your thoughts and solutions to this problem in the comments section below. You don't have to register.