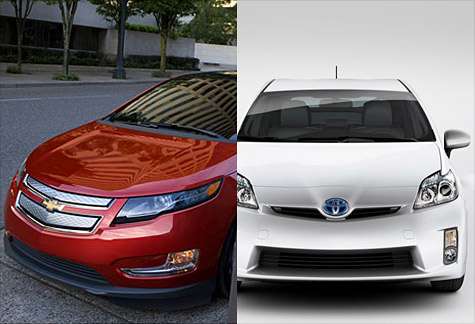 Chevy Volt was the next logical step of what Toyota Prius started. When you compare Chevy Volt vs Toyota Prius or its Plug In version it seems that Volt is an excellent alternative to the Prius, about which not many are talking about. Surprisingly, even Prius owners like the Volt.
Advertisement

These opinions are taken from Plugin Prius Facebook group, which is a public group. In them one can see what current Prius owners think about Volt, discussing some pros and cons when it comes to Toyota Prius Plug In vs. Chevy Volt.

"I made a spreadsheet of my utilization and the best fuel economy numbers I could come up with, comparing 2012 Chevy Volt and Toyota Prius models at the time, and their prices", writes Prius owner Jim Scarborough. "The Prius edged out the Volt, but not by much. On the other hand, the Consumer Reports reliability score was much higher for the Prius. I like reliability."

Apparently the numbers are numbers are different when you compare the 2017 Volt to 2017 Prius. "Try the same spreadsheet using the new 2017 Volt (already available): 53 miles on a charge and then, once the charge is used-up, 48 miles per gallon," replies Korvettes Roseville to Scarborough. He also adds that most of our average driving will be electric if you own the 2017 Volt or the Prius Plug In. Most people commute less than 40 miles to work.

There is an interesting comment from a 2011 Prius owner, published in the May 26th article in Business Insider comparing the Volt to a Prius and presenting the Volt as the "excellent alternative" to Prius. In which, that consumer writes this. "I own a 2011 Prius, and the 2016 Volt's performance blows it away. My family has to gas up the Prius only once a month, meaning that we spend around $24o a year of fuel, at current prices."

Select the one that best fits your needs. Whether it's Plug in Prius or Chevy Volt.

Kurt wrote on June 14, 2016 - 2:47pm Permalink
As someone who just dumped his 2006 Prius for a 2017 Volt, it's night and day in terms of economy and overall feel. The Prius did its job, but it was a pretty mediocre ride, the Volt is a dream by comparison, and significantly cheaper to fuel up if you run entirely on electricity, an option that did not exist on my 2006 model, but I guess in later Plug-In versions, was there to some extent. Only downside is the loss in interior space of the cabin, the Volt is certainly a less roomy car on the inside.
Dustin Dawind wrote on June 16, 2016 - 10:01pm Permalink
No one ever takes into account the tax credit when they talk about price. The volt qualifies for the full $7,500 credit. The prius plug in is the only model of prius that gets any tax credit and it only qualifies for $2,500. So if you are comparing the base model volt to the base model prius plugin total price for the volt would be $25,670 while the prius would be $28,325. The base price of a 2016 Prius (non plug in) is $24,200 and does not qualify for the tax credit. So the reality is that the two are basically comparable in price.