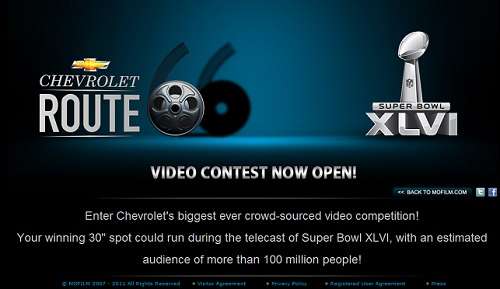 Chevrolet wants you to create the car company's next XLVI Super Bowl ad. The company has announced a contest for its Super Bowl ad.
Advertisement

"Calling all filmmakers. We’re looking for someone to create our next Super Bowl ad. Do you have what it takes?" asked Chevrolet to its followers on its Facebook wall this afternoon. The automaker is tapping on the resource of the social power and wants people to create its next Super Bowl ad.

Super Bowl ads are very popular among consumers. They are fun to watch, expensive and attract top headlines. This is why Chevy is going unique this time and invite the interested parties to company's biggest ever crowd-sourced video competition. "Your winning 30" spot could run during the telecast of Super Bowl XLVI, with an estimated audience of more than 100 million people," reads the message on the company's website.

The competition is already open and it has four steps.

First the visitor needs to read terms and conditions carefully before entering the contest. Then he or she must download The Brief Pack. The third step is to make your winning video and the the last step is uploading it online.

Chevy's Super Bowl ad competition had several scheduling stages. The two are already past. The first was the announcement of the first ever global contest. It was launched in Cannes at the Lions Festival of Creativity on June 22 by Chrvrolet and MOFILM. Now the second stage is completed too. It was the script competition for the ad. It is now closed and the winner is Avnish Mehra.

The third stage is live now and Chevrlet wants you to remember that this is Super Bowl and that you go big and be bold. Between Dec 1-23 will come the time of edits and re-shoots. "Once the videos are in Chevrolet and MOFILM will review high-potential entries and work with filmmakers to make their entries even better. Remember for the Super Bowl, the winning ad has to be the best in the competition as well as stand up against creations from the biggest advertising agencies in the world!" The top films will be unveiled at ChevroletRout66.com and three winners will be presented for voting between December 23 and January 23 of 2012.

The Game day is February 5th of 2012. Chevrolet's Super Bowl winner ad will be revealed live during the game while the winners from around the globe celebrate at a series of parties in London, Los Angeles, Rio, Singapore, New York and Mumbai. The top winner price is $2,000 dollars. First runner up is $1,500 and the 2nd runner up is $1,000 dollars. Chevrolet has complete information about its Super XLVI Super Bowl contenst at www.Chevroletroute66.com.

Anonymous wrote on September 15, 2011 - 7:32pm Permalink
lets see starts out like this their ceo is in washinton begging for bailout money ,gets bailout money then comes back for more then files bakruptcy then gets on tv lies to americans about paying the money back builds a gas guzzling supercharged smog pump corvette specialy prepps it and runs it at the ring breaks the vipers record rubbs it in for a while then gets spanked by two old vipers builds more junk vehicles and recalls all of those then says we build the best cars in america and the ceo is seen driving away in a toyota with pockets full of bailout money. ONLY GM ONLY IN AMERICA.