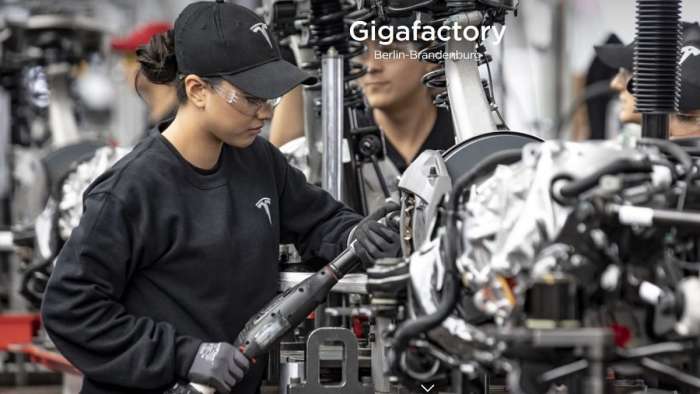 If you ever wanted to work for Tesla the company right now is hiring four types of jobs to work building the Berlin Gigafactory.
Advertisement

The Construction workers will naturally focus on the construction of the plant and “build the first Gigafactory in Europe,” as Tesla puts it.

The Engineering workers will focus on forming and conceiving ideas across Tesla’s entire product system.

The Manufacturing employees will work in the plant with robots and as Tesla puts it, will “create products alongside some of the world’s largest robots.” Indeed, robots that work in the automotive plants are huge and powerful. I have seen those robots in action in automotive plants in Germany and they are very large.

The Operations team members will focus on the entire operation and the process of the Tesla manufacturing on all levels. They will rethink traditional processes at every level, says Tesla on its Berlin Gigafactory page.

Now let’s take a look some of the job postings on the Berlin Gigafactory page and see what is required.

On Tesla Berlin career page I counted 54 job postings. I assume Tesla is not hiring only 54 people, but the company probably needs more than one person for each position. We are talking about thousands of people because the Berlin Gigafactory is going to employ 4,000 people.

Tesla is looking for people like program managers, construction operation managers, senior electrical buyers to work in the supply chain, mechanical and equipment buyers, as well as civil engineers, factory security managers and electrical design engineering leaders. This is not the exhaustive list of Tesla’s Berlin job postings, but it gives a fair idea of what types of professionals Tesla is looking to hire to work in the Berlin Gigafactory 4.

Tesla Berlin Is Looking for Lots of Talents

One position that stood out was the position of “Talent Research Manager.” This means Tesla will be actively looking for Talents across Europe and in the United States.

Here is a segment from the job description.

We are looking to hire a skilled Technical Sourcing Lead to join our growing Recruitment team at Gigafactory Berlin. You'll be the first Talent Research Lead on site and tasked with building the team that leads the sourcing efforts of candidates for specialized technical, high-volume or G&A positions. As such, you'll need great people management and coaching skills. In this role, you will build and manage the Sourcing team which finds and interacts with potential candidates online, develops talent pipelines, conducts initial candidate screenings and collaborates closely with the wider team for Gigafactory Berlin.

You have a hands-on approach and bring along outstanding communication skills, good interviewing skills and detailed knowledge of modern sourcing techniques, both online and offline. Boolean is your second language. No matter how specialized and hard to find the project brief is, you'll amaze the hiring team by uncovering the perfect candidate match from the depth of the Internet or your professional networks. You'll play a pivotal role in identifying and engaging with top talent for our Engineering, Construction, Production, Manufacturing, Business Operations, G&A and Supply Chain departments.

You'll work side by side with other Recruiters and Hiring Managers to understand talent needs, create and manage effective sourcing strategies and offer suggestions on how to best engage with the candidate market.

This is a once in a lifetime opportunity to join Tesla's rapidly growing team in Berlin and be part of Tesla's Gigafactory in Europe from day one.

In fact, look at this interesting tweet that just popped up on my Twitter screen this morning. A user named Angelika Geiger is attending a security show in San Fancisco and writes “anyone who is interested in learning more about opportunities in Germany is welcome to reach out.”

I will be attending the #RSA2020 Cybersecurity Show in San Francisco the week of Feb. 24th. Anyone who is interested in learning more about opportunities in Germany is welcome to reach out! @Germany_Works, @GTAI_com

Tesla Giga Berlin (also known as Gigafactory 4 or Gigafactory Europe) is Tesla's 4th Gigafactory. It is located in Grünheide, Germany, near Berlin and is expected to be completed in 2021.

However, last Sunday a local court in Brandenburg ordered Tesla to halt its operation because of environmental concerns raised by a local environmental group who was protesting near the Gigafactory’s construction site because many trees were being cut to for the construction.

This is one of the reasons there is not set date for laying of the foundation stone of the Gigafactory in Berlin. The environmental concern is the not biggest. In addition to a small environmental group from Bavaria protesting against cutting down trees that were artificially planted in the first place, there’s also the problem of unexploded bombs from WWII, which are all over in the ground around Berlin.

Many people outside Germany don’t realize just how much unexploded ordinance there is here. It’s a yearly occurrence that some major site in Berlin or Potsdam has to be closed while some massive bomb that probably doesn’t work but you never know is defused.

Tesla has to deal with all these difficulties before moving forward with the construction of the Gigafactory 4 in Berlin area.

Would you like to work for Tesla Gigafactory 4 in Berlin? Let us know your thoughts in the comments section below and see you in the next story. See you in my next story discussing 6 ways Tesla will change the automotive sector in Germany with its Berlin Gigafactory 4.