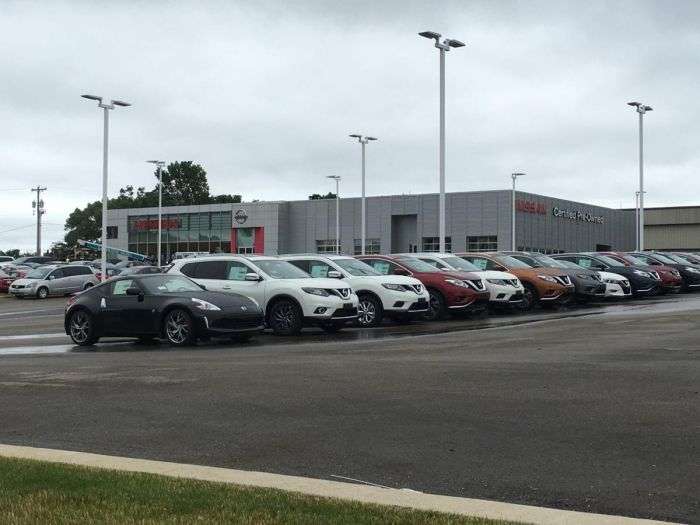 4 Most Common Ways Dealers Steer Car Buyers away From EVs

The last time you went to a car dealership to buy a new or used car, most probably you were not introduced to the dealership's used or new electric car inventory. At last, this is according to a new study by a group of researchers who posed as car shoppers. I am not surprised as I will tell you what my local Chevy dealer told me once.
Advertisement

A study, published in Nature says "Dismissive and deceptive car dealerships create barriers to electric vehicle adoption at the point of sale."

A group of researchers in the Northern Europe visited 126 car dealerships in Finlanc, Iceland, Denmark, Sweden and Norway and posted as car buyers. Of the 126 dealerships vised, only 8.8 percent of the dealers positively talked about the electric cars preferring an electric car option over a gas or diesel option. Some car buyers in this study were gently steered away from choosing an electric car, in few cases they were told not to buy an electric car because "it will ruin you."

Here are the 4 most common ways dealerships steered customers away from buying an electric car.

My Bolt Experience with a Salesman at a Local Chevy Dealership

Last year I went to my local Chevy dealership in Hickory, NC and asked to test-drive the Bolt. It was a great experience. The salesman was really nice and positive about EVs. They only had two Bolts on the parking lot and one was already sold. As we were driving we engaged in a friendly conversation. I ask him, why are don't you keep more Bolts and why isn't the Bolt prominently displayed (it was parked not in the front of the dealership but on the side). He said he would prefer selling one Corvette than two Bolts because he simply makes more money off of selling Corvettets than selling Bolts

I understand some dealers are not even signed up to sell Volts. Few will admit to it, I suppose.

Also, dealerships make lots of money in the service department. Other than tires and windshield wipers, there usually is very little maintenance needed on electric cars, especially on new Volts, Nissan Leafs and Teslas.

Selling an EV a Waste of Time?

"The cost of a car has nothing to do with the profit in a car. Most of the money profit comes from the car companies paying the dealership to move units. On top of that there is a good amount of education you need to give to first time EV owners before they sell them the car. It would be a huge waste of time for a dealership to go through that process just to have them buy another EV. On top of that there is the potential of a customer causing big problems for a dealership if they went in with different thoughts of EV ownership than what it actually is. It also comes to the brand and dealership networks some brands embrace the shady old school turn and burn mentally and others like BMW are all about getting the customer a car they love. I, for one, won’t be getting another Chevy including their trucks unless they do something crazy to keep my business. BMW on the other hand would have to mess up huge at this point to lose my future business," comments Kevin Emmons in the GM Electric Car Owners group on Facebook.

Thus, are the old-school dealership salesmen an impediment to electric car sales? Apparently yes! If the traditional car makers (other than Tesla) are serious about electric car sales, they should hire a specially trained an EV enthusiast to move EV sales forward.

Tell us please in the comments section about your EV buying experience. What is similar or contrary to this study? Yet, it's good to see that EV sales have been growing year by year.

Jeffrey Fisher wrote on May 24, 2018 - 10:44pm Permalink
I went to a Chevy dealership about a year ago in Burlington, Ontario with the intention of ordering a Bolt. At the sales reception desk, I said I was interested in the Bolt and only the Bolt and I knew that there were none on the lot. I also said that I was not interested in any other car. The receptionist told me she would contact the Bolt specialist so I waited a few minutes. He came out of his office, said "Oh the Bolt." It's a 5 to 6 month wait time so let's move you into a Cruise." I now have 8,000 kms on my 2018 Nissan Leaf and I really don't think a GM vehicle is ever going to be right for me. Unless they bring back the EV1.
Sam wrote on May 25, 2018 - 10:08pm Permalink
Many legacy dealerships don't bother having EV inventory in many cases. The manufacturer doesn't require it even if it's a part of their dealer authorization to have a demo. For the enthusiastic consumer, the dealership's EV knowledge is usually sub par from personal experience that dates back to looking at the gen.1, i3. Contact the manufacturer about the experience,and you can look forward to more poor customer service interaction. Tesla store,you see product,and get real data. I cannot wait for more "start ups"to launch their EVs.
dandanthedrivingman wrote on August 24, 2018 - 8:40pm Permalink
the last Chevy dealer i went to ask and see the new Chevy Bolt, said they thought they might have 1 but nobody k rw where it was or could find it. The sales manager of another Chevy dealership said if i was serious about buying their only Bolt at the dealership i might want to do it within 1 month, because he said "We might only get and sell ONE of These a MONTH! could this be part of the "EV sales problems with the public at large!
jim stack wrote on August 25, 2018 - 10:39am Permalink
I went to a local FORD dealer that had advertised the FOCUS EV. I was amazing it was even mentioned. When I got there they only had 1 . They didn't know a thing about it so I explained all the features and what it could do. When I tried to lease it they wanted $750 a month with $3K down. That was crazy. We found a similar priced gas car and I asked to show me the monthly lease with zero down. It was $310. But they stil would not lease the FFE for that. I contacted their Regional manager and explained. I also told how I had owned FORDS for 30 years. He called them and made them lease it at $310. It was a great EV. They used to refer people to me so I could explain and show them mime, then they could order one for the customer. PS today I own a SPARK EV and a Tesla Model 3
Tynccymnten wrote on October 13, 2019 - 10:19am Permalink
Thanks for the prudent criticism. Me & my individual were honourable preparing to do whatever explore virtually this. We got a take a fact from our local aggregation but I believe I scholarly solon light from this stake. I am rattling cheerful to see specified magnificent content being mutual freely out there.
Jiminy wrote on October 14, 2019 - 10:07pm Permalink
Ford never has any Focus Ele trics in stock. Yjey say they can't even order me one.